Artists of the 50s

Who were the greatest artists of the 1950s? Artists whose careers blossomed in the 50s, either reached their zenith or (in the case of artists with long careers) their first flowering? Peter Jones and I put this list together off the tops of our heads -- certainly we've forgotten people.

Transitions at The Gallery at Opus 40 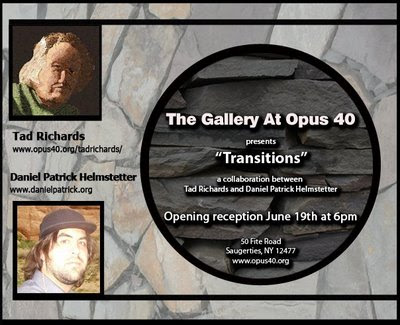 Posted by Tad Richards at 5:03 PM No comments:

Battle of the Decades

Jerry Lee takes the last one with 12 (maybe 13), but it wasn't unanimous, and it wasn't the whippersnappers who dampened the Killer's great ball of fire.
Elvis gets 2, or maybe 1, depending on who Caitlin's "ditto" was for, the vote just above hers, or the majority.
One for Patty Smyth, one for Frankie Laine, both of them deserving.

And for me, second out the door isn't hard either, but there are a few George Michael fans here who might disagree with me. I can't see how.

Jane's Addiction did some interesting stuff, and this is representative of it, quirky and ranty but arresting. Although I have to say I think Sergio is better off -- and don't worry, Sergio, there's nothing much good on TV anyway. And I definitely wouldn't have dinner with Jane.

For cultural relevance, you'd have to go with Steam, who became a ballpark staple first for White Sox fans and then for the world. As I understand it, this was cut as a demo with a scratch vocal -- they were planning on coming back and adding real lyrics to it later. But someone recognized its terminal catchiness, and a group was hastily thrown together to tour behind the song.

For musical value, you'd have to go with Ellington, Cootie Williams and Johnny Hodges. Here's another neat version of the song by Nina SImone -- http://www.youtube.com/watch?v=nwBqW26FBgo

But I'm going with nepotism. Orleans and "Love Takes Time."
Posted by Tad Richards at 5:01 PM No comments:

Email ThisBlogThis!Share to TwitterShare to FacebookShare to Pinterest
Labels: Battle of the Decades