A Crack in the Universe

A good poem is a contribution to reality. The world is never the same once a good poem has been added to it. A good poem helps to change the shape of the universe, helps to extend everyone's knowledge of himself and the world around him.

I think this is true. I want a poem to do more than be what I call “Andy Rooney poetry” – poetry that asks, wryly or sentimentally or iconoclastically or philosophically, “Didja ever notice…?” I look for poems that are a conduit to a different and unsettling reality. I want a poem to open a crack in consciousness and change the world, one reader’s perception at a time. Nothing else is worth writing.

Harvey, India, Cambodia, and not quite China

In 1956, Harvey Fite took a sabbatical from Bard College to travel in Southeast Asia, primarily India and Cambodia, to study the sculpture of those cultures. He was also invited to visit China, but this was 1956, and there was no way any American was going to get permission from the American government to go to China.

However, he remained on the Christmas card list -- can that be right? -- but if memory serves, it is -- of the 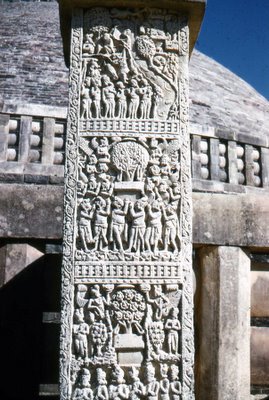 Chinese People's Cultural Commissar. And he was given a complimentary subscription to the official arts magazine of the People's Republic. This came to the Postmaster in San Francisco every month, and every month Harvey would receive a card from the postmaster: Subversive material addressed to you has been received by this post office. Did you order it? Do you want it?

Every month, Harvey would send the card back, with Did you order it? checked No, and Do you want it? checked Yes.

I remember hearing at the time that Harvey was, because of this, ranked Number 35 on the government's list of subversives, but that can't have been right. It was the dawning of Top 40 radio in those days, but there can't have been a numbered list like that.

Anyway, I just acquired an Epson scanner with color transparency capability, and I'm beginning a project of scanning, Photoshopping and archiving all the slides I can find squirreled around Opus 40. I'm starting with the India and Cambodia slides -- two boxes of the former, three of the latter. I've done the India boxes, so here are a few pictures. I'll be getting to Cambodia next, and I'm really excited about those, because I know Harvey visited Angkor Wat and Angkor Thom when they were really unspoiled. 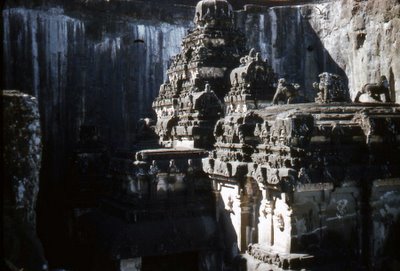 Anyway, here are a few from India. 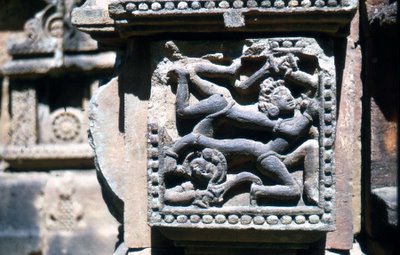 Posted by Tad Richards at 1:03 PM No comments:

I didn’t realize just how true this was until a few years ago, when I started teaching my course in the blues, although I guess I always knew it. My first important poetic influence, and to this day still the most important, was Leadbelly.
Second would be my great mentor, Donald Finkel, but I don’t think Don would mind playing that particular solo on second fiddle.
I discovered Leadbelly when I was around 16, and my idea of poetry was still hear-on-sleeve sophomoric, which it was to remain for many years, while his lessons lay dormant somewhere. But they were there, nonetheless. I was haunted, amazed, drawn in irrevocably by the stories he wasn’t telling, the stories that hovered just behind the words.

Black girl, black girl, don't lie to me
Tell me where did you sleep last night

In the pines, in the pines
Where the sun never shines
I shivered the whole night through

Black girl, black girl, where will you go
I'm going where the cold wind blows

In the pines, in the pines
Where the sun never shines
I shivered the whole night through

So much left unsaid, so much suggested. Stuff I didn’t understand till years later – the railroad man living in a company town, the house repossessed after his death. Stuff that was suggested, then reversed – the girl sleeping where she shouldn’t be, not because of sexual wanderlust, but because of tragedy. The first interpretation doesn’t feel right, even in the beginning – shivering the whole night through could be sexual ecstasy, but you know it isn’t. “The cold wind” is not a wind of passion. And then the horrendous story, sketched so starkly in so few words, of the husband’s death. A power that comes from a glimpse that gives us a world.
Italo Calvino described that glimpse, in his Under The Jaguar Sun. This is the best definition of art I have ever read:

Both in art and in literature, the function of the frame is fundamental. It is the frame that marks the boundary between the picture and what is outside. It allows the picture to exist, isolating it from the rest; but at the same time, it recalls--and somehow stands for--everything that remains out of the picture. I might venture a definition: we consider poetic a production in which each individual experience acquires prominence through its detachment from the general continuum, while it retains a kind of glint of that unlimited vastness.