Latin jazz never quite received the respect it was due, and Latin jazz musicians were always underutilized. Billy Taylor, during his tenure with Prestige, did one session with Candido, and stated in the liner notes that "the purpose of this album is to present a great new jazz artist." Candido would appear on a couple of other Prestige sessions around the same time. The label also made its contribution to the mambo era in jazz, especially with Joe Holiday's unique blending of mambo and bebop. But for the most part, Latin music was pigeonholed as dance music, and the jazz of the 1950s was music for listening, for contemplation of rhythmic subtleties. 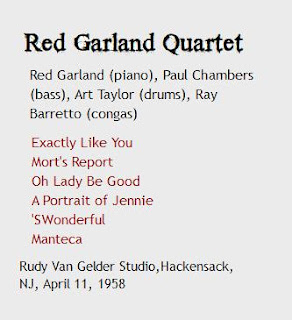 In the movie version of Oscar Hijuelos' great novel The Mambo Kings Play Songs of Love, the Cuban Castillo brothers, newly arrived in New York, head straight for the Palladium to hear Tito Puente. I didn't love the movie, but I loved the mambo sequences, the spirit of celebration, and most of all the music. And I realized, I could have been there. I could have gone to the Palladium. But if anyone had suggested it, I would have scorned them. I went to the Five Spot, the Half Note, Small's Paradise. I was the real thing, a real jazz lover. Yes. I was that stupid.

This is Ray Barretto's Prestige debut, and he is to become a frequent presence over the next few years. As one of Prestige's irregular regulars, he contributed mightily to the label, but he also contributed, in an important way, to jazz of his era, so much so that he is often referred to as "the Godfather of Latin jazz."

His first gig in the New York jazz world was an auspicious one. In 1949, at age 20 and newly out of 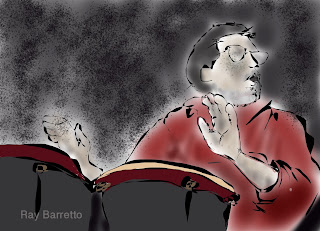 the army, he was invited by Charlie Parker to join his band. Barretto had grown up listening to the music of Duke Ellington and the swing bandleaders, and he had worked to "develop a style that suited jazz playing--a style of playing that works in a straight-ahead swing context."

In the army, he had been exposed to bebop, and it was through bebop that he came to Latin jazz: Dizzy Gillespie's recording of "Manteca," with Chano Pozo. Having grown up in Puerto Rican New York, with its music, and the radio at night bringing him Glenn Miller and Tommy Dorsey, when he heard the master conguero play with the pioneer of bebop, "it was like the gates opened up to heaven and the sun came in and choirs sang....all that." 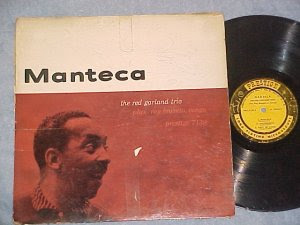 A four-year stint with Tito Puente's orchestra followed (replacing Mongo Santamaria)--a time to really develop his Latin chops. He recorded with Puente. But this session with Red Garland is his first on record with a small jazz group.

There is so much good to say about this music, it's hard to know where to start. The group recorded four standards, a blues original by Garland, and, fittingly, "Manteca." So let's start by remembering the incalculable contribution Rudy Van Gelder made to small label jazz in this era. The balance between instruments is always just right for the piece that's being played. I particularly thought of this during Paul Chambers' solo on "Exactly Like You," which Barretto punctuates with the hollow natural reverb of the conga drum.

"'S Wonderful" has a thrilling, eerie, melodic bowed bass solo by Chambers. "Manteca" is an all-out Latin explosion on the Gillespie/Pozo classic. Every cut has something special. But for a favorite, I'd have to pick "Oh, Lady Be Good," in which a Garland-Barretto-Taylor trialogue gives way to a two-way exchange between the two percussionists.

The moody, assertive "Portrait of Jennie" did not make the cut for the Manteca album, and it--unfairly--never did see the light of day until much, much later, in the Fantasy and Concord reissue days. On the Concord CD version of Manteca, it's included as a bonus track.

"Manteca" also became a two-sided 45. Its catalog number is fairly low, so I'm guessing it may have been released to Latino jukeboxes around the same time as the album release.