We move away from the old pros of Swingville. They were wonderful, but it's time to look to the future, and the future enters like a panzer division with Eric Dolphy. He was one of the most important musicians, along with Coleman and Coltrane, in tearing up the old rulebook and writing a new set of rules.

Or maybe not. Leonard Feather, interviewing Dolphy, tried to figure out just what those new rules were, but he didn't get very far. 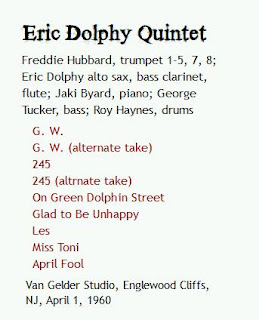 LF: For one thing, I would I would like to make it clear that I don't think I understand...as a musician you know certain things I don't understand about what you are doing and I...would like to maybe get them clarified in my own mind so that I can make it clear for the average reader ... what is happening and what people like you are doing harmonically. It's very hard to explain, very hard to analyze. Can you put it into words?

ED: Well, it, you know, it always depends on the subject of what you're improvising on of course, and then, uh... Of course if you're playing freer forms and the harmony...  improvisation is much more freer and you have much more things that you can play...the lines are not held to no chord patterns, harmonically.

LF: No, but, what I don't understand is what ARE they held to? I mean what is, what is the difference between the limitations, there must be some limitations otherwise it, you would be arbitrary, you could just play any notes that you like.

ED: Well that's the idea you CAN play every note that you like. Of course, you only can play what you can hear, and quite naturally... more or less I guess what I hear is not to your hearing, to what you're hearing. So quite naturally, I hear, uh, more notes on uh, on the same thing that's been said before.

Robert Frost famously said that writing free verse was like playing tennis without a net. Maybe Blowup, without a ball. Only you and whoever you're playing with know where the ball is going and whether you've hit it squarely. But there are spins and trajectories and lobs and smashes that only you can hear. If you get it right, you're Eric Dolphy and Freddie Hubbard. Get it wrong, and you're that tenor saxophonist on Jazzmobile who was told by Frank Foster to "feel something in B-flat, motherfucker." playing free jazz is like Michelangelo Antonioni's tennis match in

This is Dolphy's debut album as leader. He had recorded in Los Angeles with Chico Hamilton, and also with Clifford Brown, although that one has an odder history. Dolphy was a native Los Angeleno, and his dad, ever supportive of his music, built him a recording studio, and a lot of musicians--not just his friends, but serious musicians, would come by to jam with the kid. One of these sessions, with Brownie, was recorded and the recording was saved, to be released in 2005. He would pack a lot of recording into the next four years of an all-too-brief life, both as leader and sideman, including a lot of work with Charles Mingus. Much of his output would not be released until after his death in 1964.

It marks a return to the cutting edge Prestige. Esmond Edwards produced. Dolphy recorded three of his own compositions, two standards, and one tune by a contemporary, Charles "Majeed" Greenlee. 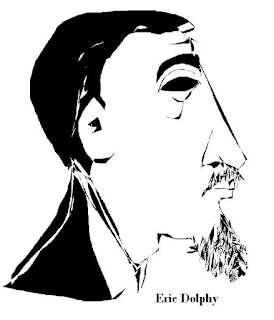 Freddie Hubbard would later become known for a more crowd-friendly style, but in these younger days he was very much in tune with the avant-garde, recording with both Coltrane and Coleman in addition to Dolphy. When there are no limitations, it puts an interesting burden on the second soloist. He has to follow in a path laid out for him by someone who adhered to no path but an inner one--what he could hear.  If he scurries back to the road more traveled, he'll seem tame by comparison. If he's faking it, or he doesn't know what he's doing, it's "feel something in B-flat, motherfucker."

All this reminds me somehow of a poem I once wrote about the wilderness mapping itself, which I'll append to the end of this.

Jaki Byard, a multi-instrumentalist although the piano was his main instrument, was new to Prestige but a jazz world veteran, though mostly in Boston, where he had played and recorded with Herb Pomeroy and Charlie Mariano. This was his first New York recording gig, and the beginning of a long and important career, including a number of albums for Prestige. He also had a distinguished career as an educator, including establishing the jazz studies program at the New England Conservatory of Music.

George Tucker, like Dolphy, would not be around for long. He died in 1965 without achieving the outsized reputation of Dolphy, but being quietly respected by his peers and by younger bassists. It easy to understand why, listening to his work on this session. As the bassist, it's his job to keep the beat, and he does so, but with a full appreciation of the complexity of the music and the need of the beat to reflect that.

And it's not hard to understand why Dolphy chose Roy Haynes rather than a younger drummer more identified with the free jazz movement. All you have to do is listen.

The Dolphy compositions are freer. The standards are still grounded in melody and chord structure, although Dolphy moves further and further out as he develops his improvisation. The Charles Greenlee composition is a bit of a surprise. Although Greenlee began his career in Detroit in the 1940s, he's probably best known for his avant-garde work in the late 1960s and 1970s with Archie Shepp, so the surprise is that "Miss Toni" is really the most boppish piece of the day.

The balance is a good one, for the listener of the day to get used to the direction Dolphy was headed in, and maybe for the musicians who were playing with him, too.

Most of this session was released in 1960 as Dolphy's first Prestige album, Outward Bound. The alternate takes of "G. W." and "245" would eventually see daylight on much later compilation releases, and "April Fool" would be included in a posthumous release, 1966's Here and There. Outward Bound was first released on New Jazz, later on Prestige.