A friend asked me for help compiling a master playlist of acoustic music. I wasn't much help.

It was a question of definition. By acoustic music, he meant what Bob Dylan got booed for not playing at Newport. I kept pointing out that there was a lot more acoustic music at Newport than what was played at the Folk Festival. 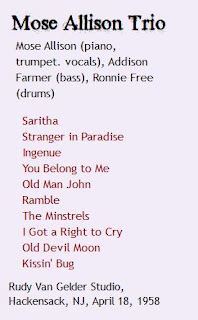 Most jazz is acoustic. For that matter, up through the 1950s, nearly all if not all country music was acoustic. But he wasn't interested in adding Louis Armstrong or Jack Teagarden, Bob Wills or Spade Cooley or Hank Williams to his playlist. And so we went our separate ways (and I hadn't even gotten to classical music).

But the one artist from my bailiwick that he could accept was the genre-bending country boy/college English major from Tippo, Mississippi, Mose Allison.

That, of course, was Mose Allison the singer-songwriter, which was a label he understood, and we're not quite there yet. At Prestige, although he had been widely praised for "Blues" (later "Young Man Blues") and "Parchman Farm," which was also a blues, in the traditional 12-bar format and with a traditional prison/murder theme, the full range and individuality of his gift for lyrics had not asserted itself yet, and his gifts as a jazz composer had.

His debut on record had been Back Country Suite, a series of linked musical vignettes that captured, in a way that was witty and still basic, the flavor of the back country he had come from. The suite, instrumentals and one vocal, took up one side of the LP, and the other was devoted mostly to standards and blues, including one number that he played on trumpet. That became the pattern for the rest of his Prestige output, and was pretty much the pattern for the Columbia sessions that followed. The Allison that a second generation of fans would take to their hearts really emerged with his Atlantic recordings.

So this is a good thing. Allison the singer/songwriter was only one part of the total package. He came to New York as a working musician, a protégé of George Wallington, a piano player who was good enough, in the competitive jazz cauldron of New York, to gig and record with Stan Getz, Al Cohn and Zoot Sims. Getz never recorded any of his compositions, but did play a couple in club dates. Wallington did; he was the first to record a Mose Allison tune. These albums might not get played as much as I've Been Doin' Some Thinkin' (Atlantic) or Back Country Suite, but they're significant, and  importantly, they're enjoyable.

Ronnie Free makes his wax debut on this session, and he also had what it took to make it in the cauldron of New York jazz...briefly.

In that brief time, he made people sit up and take notice. He was adopted by Hall Overton, David X. Young and W. Eugene Smith of the famous jazz loft on 6th Avenue: he slept on their couch and was the unofficial house drummer for many of their legendary loft jazz jam session. He was hired by Marian McPartland, a frequent visitor to the loft, for her long-running trio at Hickory House. "I was thrilled to have Ronnie working with me in my trio at the Hickory House," McPartland recalled later.  "He was considered the great young hope among drummers on the scene, a really wonderful player. He had a different style, more swinging, very subtle. Free is a good name for him. He didn't play bombastic solos like many drummers did. Ronnie was one of the best I ever saw." 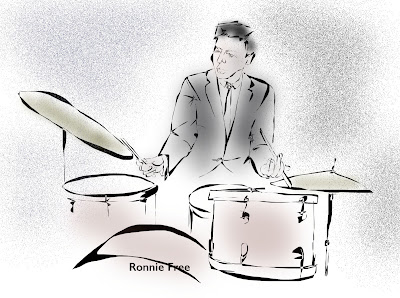 He and Mose, one August day in 1958, walked from the pianist's 106th Street apartment up to 126th Street, where they had heard that jazz musicians were gathering for a photograph. If you don't remember seeing them in "A Great Day in Harlem," it's because they weren't there. They arrived too late.

That isn't the only place that Free wasn't. As McPartland remembers, "Then one night he just disappeared. We had a gig and he didn't show up. Nobody saw him after that. Thirty or thirty-five years later, in the early 1990s,1 was walking down the street in Columbia, South Carolina, and I couldn't believe my eyes, but Ronnie Free was walking right toward me, looking exactly the same. My first words to him were, 'What happened to you that night you didn't show up for the gig?"

A sudden disappearance is never a happy story, and it wasn't for Free. Heroin played a part in it, of course. Ronnie Free didn't make the Hickory House that night because he was in Bellevue. Maybe he had hit the jazz scene too young, too vulnerable.

When he was released, he left New York, never to return. He went home to South Carolina. He did some moving around. Mose Allison ran across him in the 1980s in San Diego, where he was driving a cab. "Ronnie hadn't been playing and didn't even own any drums," Allison recalled later. "We found him some drums, and he played the gig as beautifully as always. He hadn't lost a thing. It was amazing. He still has that great, natural touch."

But mostly, he stayed close to home, first in South Carolina and then in Virginia, leading a healthy life, playing two-man beach volleyball, hiking with his dog, playing music with a local trio. He is still with us.

"I Got a Right to Cry" is the one vocal on the album. It's by Joe Liggins, a rhythm and blues bandleader from the 1940s and 50s. Liggins had one big hit, "Honeydripper," but for the rest, while he had popularity in the rhythm and blues world, you'd have to be a real R&B fan to know his songs, which Allison clearly was. He had good ears, and "I've Got a Right to Cry" fits him perfectly.

On the other hand, everyone knew "Old Devil Moon." It was the biggest hit from the successful Broadway musical "Finian's Rainbow," and has been widely covered by both jazz and pop artists. "Stranger in Paradise" was Allison at his most postmodern, and since there really wasn't a postmodernist movement back then, certainly not in jazz or pop music, one might call it proto-postmodern. A classical composition by the Russian Alexander Borodin, turned into a Broadway musical number by Robert Wright and George Forrest, given a blues reading by Allison.

"You Belong to Me" is one of those post-Great American Songbook numbers from the 1950s that were in the process of being overrun by rock 'n roll. Jo Stafford had the hit with it, others recorded it, but it had a more interesting pedigree than one might think. It was written as a country song by Chilton Price, who worked as a music librarian at a Louisville radio station, as a woman's plea to her soldier boyfriend not to forget her while he's stationed in exotic places around the globe. Country stars Pee Wee King and Redd Stewart heard it and told her that if she gave them co-writing credit, they'd get it recorded. They did actually tinker with it some, taking out the soldier references to give it more universality. In this, they followed the exact opposite pattern from Shirley Alston of the Shirelles, who came into the studio to record a song called "I'll Be True to You," and on the first take, ad-libbed an intro where she promises to be true to her soldier boy. "Soldier Boy" it became, and a huge hit. Price also wrote "Slow Poke," which King and Stewart also added their names to, and which became a big hit for King.

"I've Got a Right to Cry" would have made a nice jukebox single, but it was never released that way. Ramblin' with Mose came out in 1959, and some of its songs were eventually repackaged in
various ways.