Before you answer, consider one other fact.

Detroit, like most of the jazz world of this era, was male dominated, but there was enough of a meritocracy that it was possible for a woman to make it, if she was really good. Those doors didn't open easily. But then, to play in Detroit at all, you had to be ready to challenge and prove yourself with some of the finest musicians in the country. Three who 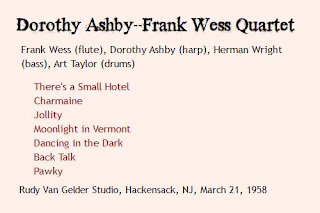 All three were pianists. There was a certain amount of gender discrimination in the instruments women were presumed able to play, just as there was racial discrimination in the positions football players were presumed able to play. There were all-girl orchestras in the 30s and 40s, so there were at least some musicians playing a variety of instruments. A couple of my favorites: drummer Viola Smith, the Hep Girl, who announced in Down Beat that women could hold their on any male bandstand, and proved it by sharing a stage with Chick Webb. And trombonist Lillian Briggs, who later became an entrepreneur and rented the pleasure yacht Monkey Business to presidential hopeful Gary Hart, who became an unhopeful when he was caught on the yacht doing 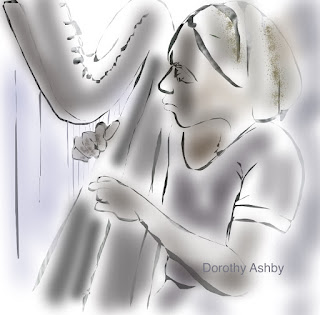 monkey business with a woman not his wife. And Terry Pollard put together a group of musicians good enough to challenge a group led by Clark Terry in the Leonard Feather-produced LP, Cats vs. Chicks.

Ashby proved all of that (and so did McLeod/Coltrane,  who would later take up the harp). Critic Tom Moon, in an essay for National Public Radio, describes her achievement:

Ashby operates in an unassuming way, leaping through intricate arpeggios that no other jazz instrumentalist could attempt. Her single lines may not be terribly fancy, but she selects her notes carefully, and plays each one with a classical guitarist's stinging articulation...sometimes snapping off chords as if the harp were just a bigger guitar, and at other times using its immense range to conjure an enveloping wash of sound in the background. 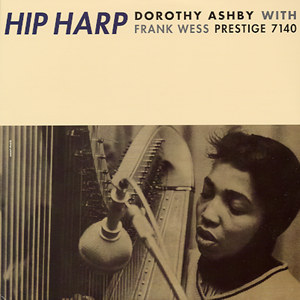 You get all of that and more on this collaboration with Frank Wess: the "more" being her considerable gifts as a composer. The four standards on the album are augmented by three Ashby originals, "Pawky," "Back Talk" and "Jollity." "Pawky" means "having or showing a sly sense of humor," and she does that. She also takes the harp out of the parlor and into...well, actually into Rudy Van Gelder's parents' parlor, but this is a parlor in which nearly every jazz great has sipped tea. She and Frank Wess complement each other on strings and woodwind as ingeniously as Kenny Burrell and John Coltrane had done a fortnight earlier in the same parlor. She also does a wonderful bass-harp duet with Herman Wright on "Back Talk" which does everything Tom Moone describes: the biting single-string notes and the enveloping sound of the harp. And Art Taylor gives the session all the propulsion it needs.

The album was released as Hip Harp, which was sort of a hard sell--in case you hadn't realized that a harp could be hip. It's had various re-releases over the years, and "Charmaine" was included on a Moodsville collection called Lusty Moods Played by America's Greatest Jazzmen. A jazzwoman, it turned out, could  be just as lusty and just as great.

--Dave Grusin
An important reference book of all the Prestige recordings during the time period. Furthermore, Each song chosen is a brilliant representation of the artist which leaves The listener free to explore further. The stories behind the making of each track are incredibly informative and give a glimpse deeper into the artists at work.
--Murali Coryell
Posted by Tad Richards at 1:34 PM

What a huge task are you doing with PERSTIGE RECORDS.
Serge Chaloff brings me here trough YOUTUBE. I'm also a musical blogger and i wrote about Doroty, Alice and Brandee.
I'm agrre with you nowadays is normal womens in every instrument but in the past was different.

A link to my blog. It is in spanish.

My Spanish isn’t great, but I was able to read through your entry. Great job.
Tad Richards