As the countdown to Coltrane's departure from Prestige continues, one can't help but think of this as a leadup to what followed in 1959. As important as these albums for Prestige are, they have to be looked as prelude to two albums that would change the shape of jazz as profoundly as did the records Ornette Coleman was releasing at the same time: Kind of Blue, with Miles Davis, and Giant Steps, with Coltrane himself as leader. For me, at the time. Kind of Blue was a terrific album, and I can understand and appreciate its continuing popularity. But Giant Steps was the real game changer, the one that made me rethink everything I thought I knew about jazz (and don't forget that everything I knew about jazz, I had learned over only the previous couple of years). Much of the work Coltrane did for Prestige was held back for later release, so sessions like this one would reach a public which had already been wowed by Giant Steps. Good news for Prestige in that Coltrane was hot-hot-hot, so anything with his name on it would sell some records, not so good news in that the earlier material was bound to be overshadowed by both Giant Steps and My Favorite Things. 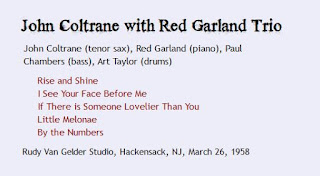 Still, this was recognized for its quality. When four tracks were released in 1961 as Settin' the Pace, a Billboard review reminded the reader that it came from "one of Coltrane's most productive periods."

Coltrane himself saw it as a productive period. An article in Down Beat by Ira Gitler pronounced him "a happy young man," who had been "dejected and dissatisfied" with his playing, but was now feeling good about the way things were going. The bad period had been the heroin addiction that had gotten him fired from the Miles Davis Quintet. The positive stuff came after that. Rejoining Miles was part of it. Even more important, the time spent with Thelonious Monk after kicking the heroin habit, and the insights into composition and theory that he got from Monk. And nearly as important, the work he was able to do with Prestige as a leader, developing his own sound. For me, listening to this music in the order of session chronology, rather than release date, that development has been particularly interesting to follow.

I've said a lot about the invaluable service Wikipedia has provided to this jazz researcher, with many pages devoted to individual albums, including recording dates. release dates and composer credits for tunes. And I continue to be grateful. But Wikipedia can be a little snarky about Prestige. Every one of these Coltrane sessions is just a little denigrated. This one is described as "assembled from unissued results of a single recording session," and I'm not sure that you assemble something from a single recording session. Basically, a single recording session is already assembled. Other of the Prestige releases are described as "without Coltrane's input or approval," as though this were something shady. In fact, if a label books a session, the release date of the product is generally the label's decision.

None of these later releases are included in the partial discography  on Wikipedia's main Coltrane page, and that's not an accidental oversight.

But they're important albums, and this is an important session. It features three ballads that are not exactly in the mainstream of the modern jazz catalog, athough "I See Your Face Before Me" had been recorded on a 1955 Miles Davis session for Prestige, with a quartet, although this was right around the time that Coltrane was joining Miles. Trane handles "I See Your Face Before Me" in a somber ballad tempo, but the rest of the session features Trane really starting to explore the "sheets of sound." "If There is Someone Lovelier than You" begins as a ballad but takes flight from there. "Rise and Shine." actually the first cut from the session, rises and shines right from the get-go, as does Jackie McLean's "Little Melonae."  This is what Trane was starting to explore with Miles, but here it's rewarding to hear him explore on his own.

The last tune on the session did not fit onto Settin' the Pace, and was held off for yet a later release, 1965's The Last Trane. Wikipedia is particularly scathing about The Last Trane, declaring that Prestige had "used unissued recordings to create new marketable albums without Coltrane's input or approval." There was, of course, a reason why "By the Numbers" didn't make it onto Settin' the Pace: recording technology being what it was, there were only so many minutes of music you could fit onto an LP record. Presumably Coltrane, Garland, Chambers and Taylor were all capable of doing the math, and realizing that one of the cuts from this session would either remain unreleased or would be released in some other package. And presumably they did five tunes on this date because they had Rudy Van Gelder's studio booked for the afternoon, and they had the time to do one more.

Billboard, in 1965, was less shocked and dismayed by the release of The Last Trane/ Although noting that it was "an uusual reissue of Trane's work during the late 50s," their reviewer went on to say "Sonically perfect, musically inspired--it's a gathering together of Trane's best. Particularly outstanding is a beautiful blues solo by pianist Red Garland on 'By the Numbers.'"

I couldn't agree more. "By the Numbers" is not just a discarded Coltrane track dragged out without the musician's approval, at a cost to his reputation. It's a 12-minute cut, attributed to Coltrane as composer, but given over as a showcase to Garland, whose solo takes up the first five-plus minutes. Garland takes Coltrane's theme, and plays the blues, in as nice a pure blues improvisation in a modern jazz format as you're likely to hear.

Coltrane, of course, was no stranger to the blues, but as his career progressed, he was more drawn to ballads and the free stuff. So it's especially interesting to hear him on "By the Numbers," going his own way as always, but working off of Red Garland's blues base. "By the Numbers" was also released as a 45, which must have been interesting, with Garland on one and Coltrane on the other. Much like Billy Butler's guitar solo on one side of"Honky Tonk," and Clifford Scott's tenor sax solo on the other.

The same issue of Billboard reviews another Prestige reissue of some Miles Davis tracks from the various Contractual Marathon session, and points out, quite rightly, that "this might become 'the Miles Davis Quintet album to own'...especially if the budget-minded buyer can't own them all." This may be a quaint notion to today's music-streaming aficionado, but it made a lot of sense back in 1965.
OK, enough grumping. Wikipedia does the jazz researcher a tremendous service by posting so much information about individual albums, and as far as opinions are concerned, we can always form our own.

An important reference book of all the Prestige recordings during the time period. Furthermore, Each song chosen is a brilliant representation of the artist which leaves the listener free to explore further. The stories behind the making of each track are incredibly informative and give a glimpse deeper into the artists at work.
--Murali Coryell
Posted by Tad Richards at 11:38 AM