Shirley Scott and Duke Ellington proved an irresistible combination, so Prestige revisited it in 1961,  with a new trio and new Ellington material...with one reprise, "C-Jam Blues" made the list for both sessions.

Her new sidemen are bassist George Tucker, a Prestige veteran who had done one previous Scott session, and Mack Simpkins, whose recorded output was slender. He would accompany Scott and Stanley Turrentine on an Impulse! recording five years later, and he's listed as the drummer on a Clara Ward 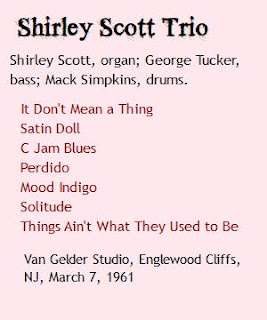 Singers album, which suggests the sort of longevity on the one hand, and versatility on the other, that would result in a lot of anonymous but significant studio work.

It's interesting to compare the two C-Jams.  Both feature the bass prominently, but there seems more a partnership with longtime accompanist George Duvivier than with Tucker, and Scott's goals seem to be different. In the 1959 session, there's more freewheeling improvisation--and freewheeling improvisation is different on the organ, especially with Shirley playing it, than it is with other instruments. In those earlier recordings, she's always searching out different things that an organ can do. Come 1961, she's about finding a groove and riding it. And Ellington provides an ideal vehicle for both approaches.

Arthur Edgehill gets a brief solo in 1959. Mack Simpkins does not, but he swings and he does the job for Scott, and it's good that he does have these couple of afternoons in the limelight for future generations to get a taste of his contribution to the music of his era. 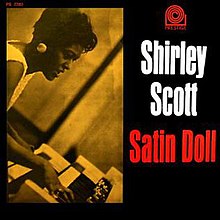 "Satin Doll" also exists in an album version and a shortened 45 RPM version, both of them featuring a sudden and exciting jump into the upper registers of the organ in mid-performance.

It's interesting to a new trio after a series of albums with the old one, but basically a Shirley Scott album is Shirley, and an album of Ellington favorites is Ellington, and that's what you plunk down your $4.98 for, and it's worth the price of admission. Great tunes, interpreted by one of the giants of her era.

And Volume 4 in preparation!