It seems that Shirley Scott saved her more mainstream work for the small group sessions with Eddie “Lockjaw” Davis (and later Stanley Turrentine), and her more adventurous work for trio recordings. Which is interesting, because organ trios were at such a peak of popularity in jazz clubs and supper clubs at this time, generally speaking a surge in popularity means a lot of people who know they expect, and expect to hear what they know. 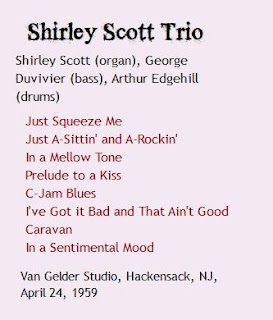 It’s not clear that this Ellington album was one of Scott’s big sellers. It seems never to have been re-released, not even years later on the Original Jazz Classics line from Concord, and none of the tunes from it were culled for later anthology albums. On the other hand, Billboard  gave it an enthusiastic mini-review, liking it for all the right reasons:


Shirley Scott’s distinctive style on the organ is shown off to good advantage on this collection of Ellingtonia. She is more successful than most organists in getting a full range of color from her instrument and she shows a warm and fluid style at the piano in a few tunes.

So there you have it. Somebody who came to this album, in 1959, thinking “that Shirley. She’s always got something new up her sleeve. Wonder what it’ll be here?” was going to love this. The fans who bought it thinking “Oh, boy—an album of Ellington tunes. A hot organ trio. What could possibly go wrong?” might be scratching their heads as they listened to “Caravan.” But...don’t forget that Billboard also praised her warm and fluid style, and Lord knows it’s there. There’s much on this album to just dig, and just dance to. Maybe that’s why Shirley Scott stayed so popular for so long: she provided the comfort food and she provided the challenges.

Maybe on another label, things would have been different. Maybe when they rehearsed it, Esmond Edwards would have said “Hey Shirley, let’s just touch on the melody to ‘Caravan’ before you take it out there.” Or maybe he would have said, “That’s great. Let’s do one more take, and Shirley...”
Or maybe not. Maybe even with a little more license to go for perfection, Edwards would have dug Scott’s spontaneity, and decided to stick with what she wanted. And it’s really hard to argue with any of her choices. Half a century later, you can still feel the pulsing energy as well as the experimental courage.

I know I talk every time about how perfectly suited George Duvivier and Arthur Edgehill were to Scott and her sound, but I’ll say it again.

The album was.titled Scottie Plays the Duke. It may not have vaulted up the charts, but it did well enough that Prestige brought her back with Eddie Davis a week later, and with a trio before the year was out. And don’t forget, Billboard didn’t review all that many jazz albums. They knew this was an artist to follow.

Prestige also released two 45s off the session. The A side of the first is “In a Mellow Tone,” and this could certainly have lit up some jukeboxes, with a rhythm and bluesy drive that gives a whole new meaning to mellow. And you could dance as well to the flip side, “Just Squeeze Me.”

The second 45 continues the dance groove with “Just a-Sittin’ and a-Rockin’,” and “Prelude to a Kiss” for slow dancing, and what better prelude to a kiss could there be?

An important reference book of all the Prestige recordings during the time
period. Furthermore, Each song chosen is a brilliant representation of
the artist which leaves the listener free to explore further. The
stories behind the making of each track are incredibly informative and
give a glimpse deeper into the artists at work.
--Murali Coryell
Posted by Tad Richards at 4:31 PM