Most of this session went on a Moodsville album, along with four songs held back from an earlier date.

She had a new bass player for the date in George Tucker. Tucker had some experience accompanying organs, having played on Johnny "Hammond" Smith's two Prestige albums. She continued with Arthur Edgehill on drums.

She is perhaps a little more subdued for Moodsville. Musically, she continues to reward the listener, but with a more limited palette of sound. Rather than 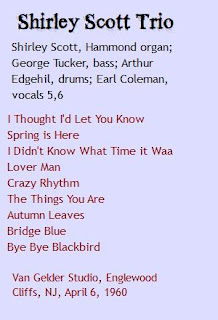 seeking out new possibilities of electronic sound, she stays close to the sound of a piano, the percussive individual notes stretched just a little by the electronic sustain of the Hammond. So it is in its own way an experiment with the different possibilities of her instrument. As one of the most popular jazz musicians of the decade, she recorded a lot, both with Prestige and Blue Note, and later Impulse and Atlantic, and she was always going to find a way to make it interesting.

For the four Moodsville songs, she picked two Rodgers and Hart standards, "Spring is Here" and "I Didn't Know What Time it Was," and you can't go wrong with Rodgers and Hart. The other two are also ballads, and equally romantic, but from composers with interesting stories. "I Thought I'd Let You Know" was composed by Scott's fellow Philadelphian Cal Massey in an uncharacteristically romantic mood; Massey was to become best known for his uncompromising political stance on civil rights, which caused him to be blacklisted by some of the large corporate record labels.

Jimmy Davis (not the Louisiana governor who wrote "You Are My Sunshine") is best known for written for Billie Holiday which has become a classic, but his story is more than that, and worth remembering. Drafted in 1942, he refused to report to a segregated army and demanded that either be exempted or seconded to the Canadian army, which was integrated. When both demands were rejected, he chose prison over a segregated armed forces. He did eventually agree to join the army, and was sent to France in 1945 with a musical unit. He fell in love with the country, and eventually, like many other African-American musicians, became an expatriate. "Bye Bye Blackbird" was held for a 1961 release, Shirley's Sounds; "Autumn Leaves" and her own composition, "Bridge Blue," had  wait until 1966 and Workin'..

She also cut two tunes, "Crazy Rhythm" and "The Things You Are," with Earl Coleman. They were never released. Too bad. Coleman really never got his due.