Joe Newman is back for his second of three Swingville sessions, and it's very much like the first: Musicians drawn from the Basie extended family, solid swinging arrangements, Tommy Flanagan taking the Count's chair at the piano, Basie bassist Eddie Jones on board. This time instead of Frank Wess it's Frank Foster on tenor sax.  Non-Basie drummer Bill English replaces non-Basie-ite Oliver Jackson on the drums, but like Jackson, English can swing it. We've heard him before, in 1956, with Bennie Green. 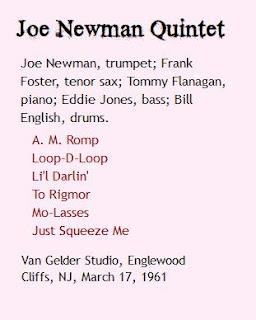 A big difference here is the choice of material, which leaned heavily on Basie the last time out. This time, although he includes one Basie staple (Neil Hefti's "Li'l Darlin') and one Ellington number ("Just Squeeze Me"), the rest are all Newman compositions.

A small group is always going to be different from a big band. The most famous attempt to recreate a big band sound with a small combo was that of ex-Chick Webb alto saxophonist Louis Jordan--and he succeeded, instead, in creating a sound that virtually defined the rhythm and blues of the 1940s.

Newman doesn't achieve quite so revolutionary a transformation. But it's interesting to compare Basie done by Basie and Basie done by a small group of Basie-ites. "Li'l Darlin'" was first recorded in 1957, by a Basie orchestra that included Newman, Foster and Jones.

Neil Hefti went from high school to playing the triumpet with various dance bands, and starting to write arrangements. Shelley Manne was the drummer for one of them, and he recalled in an interview with Ira Gitler (quoted in Wikipedia):

In 1944 he joined Woody'Herman's band, a period he describes as "the first time I sort of got into

jazz." It also brought him to New York, where he went to 52nd Street and started listening to what Dizzy Gillespie was doing on the trumpet. He loved it and was intrigued by it, but at heart he was probably always a dance band guy. In an interview with Forrest Patton, he recalls going as a boy to hear Duke Ellington, Jimmie Lunceford, Count Basie, Artie Shaw and others when they played in Omaha, but the bandleader who really won his heart was Britisher Ray Noble, later to gain fame as the orchestra conductor for the Edgar Bergen/Charlie McCarthy radio show. His reaction to Noble:

After attending the show, I said to myself that if I ever became an orchestra leader, that's the kind of orchestra, I would want.

When Count Basie hired Hefti in 1950, he had built a strong reputation in the jazz world, first with Herman, then as a freelance arranger for Buddy Rich, Georgie Shaw, and others. He also led and arranged for studio bands for the various New York record labels, and this was in large part what drew Basie to him. In a changing economic world, Basie was intrigued by the idea of becoming the kind of band that would be booked regularly on shows like Ed Sullivan, perhaps even becoming a house band. His arrangements for this era, with Hefti as one of his chief arrangers, came to define the Basie sound, as described in the Patten interview:

Patten: Over the years, I've heard "the Neal Hefti format" to a number of pieces, especially those that were written during the Basie years. It usually starts with a musical phrase, then goes into a percussive break and returns to the melody again. I've heard this style imitated by a number of composers.

Hefti: Basie told me himself that when he had people writing for his band, he'd tell them to "write like Neal."

Basie's "Li'l Darlin'" is just such an ensemble piece. Not so much the percussive break. Because it's Basie, it rewards the listener, but it rewards the dancer even more--a slow, dreamy, late night melody for melting in each other's arms, and since I'm writing this on New Year's Eve, I hope and trust many couples will be doing just that.

The 45 RPM single from this session is one of Newman's own compositions. "Mo-lasses" has a delightfully retro title, harking back to rhythm and blues instrumental jukebox hits like "Corn Bread." It has some of that same rhythm and blues urgency, some modern virtuoso soloing, and, in fact, more of a Basie feel than "Li'l Darlin'." It has been recorded by others, most notably Woody Herman and Ray Bryant.

The album came out on Swingville as Good n' Groovy. Newman had a prolific career. In addition to his work with Basie, this was his 16th album as leader, and his second of three for Swingville. Esmond Edwards produced.

And Volume 4 in preparation!