One of the joys of this project is finding wonderful musicians I had never heard of before, like Joe Holiday or Jon Eardley or just now, Bill Jennings. But here we have a whole group I’d never heard of, which arrived on the scene as a group, stayed together, and vanished together.

Groups with collective names, rather than the name of the leader on that date, are relatively rare in jazz as opposed to other musical genres. Rock and Roll has the Beatles and the Champs, rhythm and blues the Orioles and the Clovers, pop music the Ink Spots amd the Crew Cuts, country music the Oak Ridge Boys and Lady Antebellum, classical music the Amadeus String Quartet and the Kronos Quartet, and of course, all of these are just scratching the surface. In jazz, if you named two random representative groups, you’d have a hard time coming up with a third. The Modern Jazz Quartet is the gold standard, of course, but even the MJQ, for all their decades together, are four jazz musicians who had forged individual reputations.

But this is a band. You don't listen to them because hey, you've always liked Art Farmer, let's check out who he's playing with now. You've pretty much either heard of the band, or you haven't heard of any of them.

They came together in Cincinnati, all locals except for Belfast, Ireland-born drummer Ronald McCurdy. Leader and alto sax player  Curtis Peagler had played with Red Prysock, but the others were just homegrown talent that had come together. They were gigging locally around town when Eddie "Lockjaw" Davis heard them and encouraged them to make a demo tape for him to take to Bob Weinstock at Prestige.

Which piqued my curiosity. Was that common back then? Demo tapes certainly became a big deal in later days, but in 1959?

How did new acts get heard and signed? Doowop groups would go to the offices of indie record label owners and audition. A country and western hopeful like Loretta Lynn might cut a record, which was possible. Independent record labels like Sun also rented out their facilities  for anyone to come in and record a birthday gift for Mom, which is how Sam Phillips of Sun discovered Elvis Presley. The young country hopeful might then drive around to radio stations in the south, aLynn did, trying to get it played.

But jazz musicians? In the first place, they generally weren’t self-contained bands, so the idea of an unknown band trying to get a record deal is a little unusual. They were bass players, or trumpet players, or even tuba players, and my assumption was they’d come to New York or LA or even Chicago or Philadelphia, sit in on jam sessions, try to get noticed by an established jazz star who’d hire them for a club gig or a record date.


But a demo tape it was. Bob Snead, writing the liner notes for the Disciples' debut album, is a little uncomfortable withe the term, and clearly not sure his readers will know what it is. He calls it a demonstration tape, and later, a refers to a "demo." And it did the job. Perhaps its rarity was part of its charm. Certainly Weinstockk listen

Weinstock signed them to New Jazz, and brought them in to Rudy Van Gelder's studio, where they proceeded to demonstrate that they were worth the shot. They were a tight ensemble, versed in bebop, a fresh sound.

Second horn player William "Hicky" Kelley brings something a little unusual to the table in his choice of instruments: the euphonium and the normaphone. The euphonium is a brass instrument, lower-pitched than the trumpet or flugelhorn, more in the baritone range. Euphonium players are often also tuba players. It's rare enough in jazz that I can't find any example of its use on record by a well-known jazz musician. 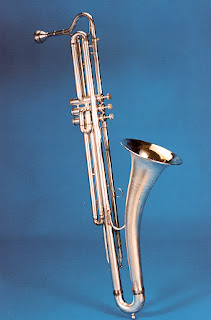 The normaphone, Kelley's preferred instrument, is even odder, and I can't find a reference to anyone else ever having played it. Apparently, they were made in Germany in the late 1920s, and only about a hundred of them were ever made. There might have caught on, given a chance, but the jazz craze in the German Weimar Republic was snuffed out by the Third Reich as decadent, much like the Kit Kat Club immortalized in Cabaret. The normaphone has the bell of a saxophone, the three valves of a trumpet, and the sound, more or less, of a valve trombone. Kelley insisted he wasn't just playing it as a novelty, and I believe him. If someone gives you a normaphone, you might first be pleased with the novelty of it, but then you might well fall in love with its sound. The German instrument makers of the early twentieth century, inspired by their spiritual godfather Adolphe Saz, were very good.


And the proof is in the playing. Peagler, Kelley and the rest play what could be called a textbook 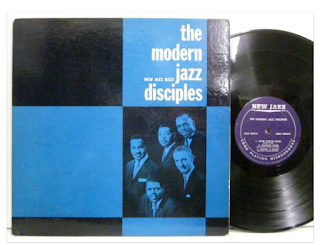 lesson in bebop, except there's nothing of the textbook in it. They play bebop because they love it, and it's fresh and original and winning in their hands. Cannonball Adderley's "A Little Taste" gives a little taste, and a tasty one, of what they can do. They feature originals by Kelley/Peagler and by bassist Lee Tucker, give Charlie Parker his due with "Perhaps." "Slippin' and Slidin'" (not the Little Richard song) has no composer credit on the record label itself, is credited to an Edward Baker on AllMusic's website, and to Slide Hampton on the liner notes.."After You've Gone," by Henry Creamer and Turner Layton, is a classic that goes back 1918 and vaudeville days.

I guarantee you won't regret spending some time with these guys. The album was released on New Jazz, eponymously titled, with one cut held over for their second album.
Posted by Tad Richards at 9:16 PM