Benny Golson is a jazz legend for all sorts of excellent reasons: saxophone great, composer, and co-leader of a legendary if short-lived 1960s group, the Jazztet.

As a composer, he can lay as legitimate a claim as any to the title of Third Most Important Modern Jazz Composer--Thelonious Monk and Duke Ellington will always be one-two, although their order can be debated. Then there are Dave Brubeck and Dave Grusin, Tadd Dameron...and others, but Golson is in that group. Few can match him for the number of compositions that have become jazz standards-- the 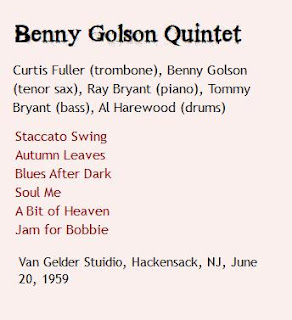 tunes that every jazz musician can be expected to know if they're called at a jam session, and that virtually every jazz ensemble has recorded at one time or another. "Killer Joe" has been recorded over 50 times; "Stablemates," the tune that first drew attention to Golson as a composer, has over 70 versions, as does "Whisper Not;" musicians have gone into the studio with "I Remember Clifford" well over 100 times. And these are all jazz standards, not popular songs with lyrics which have also become favorites with instrumentalists.

"Stablemates" was first recorded by Miles Davis in 1955, when Golson was 26, but the story of how it got to Miles goes back to Golson's childhood in Philadelphia, a city that spawned a lot of young jazzmen (and women: don't forget Shirley Scott). Young Benny had studied piano until, at 15, he went to hear Lionel Hampton in concert, and when Arnett Cobb stepped out in front to play his solo, he knew that there was nothing else to do but play the saxophone. If he only had one. And if he knew which saxophone he wanted to play. He told his mother of his longing, and she asked which saxophone he wanted. "Oh...the one with the curve in the neck." 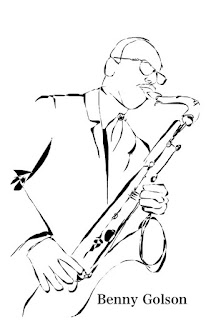 The Golsons were about as poor as you could get. Mrs. Golson took in washing, and one day young Benny found her crying because she didn't have five cents to buy soap to do her loads of wash. But she somehow put together the money to buy her son a saxophone with a curved neck.

He and his friends began practicing and playing together by the open window of his mother's apartment, to the bemusement of their long-suffering neighbors, but as Golson recalls it, they knew they were starting to get good when their neighbors started calling requests in through the window.

Benny went to Howard University and studied music theory, then started playing professionally with rhythm and blues bands: Tiny Grimes, Bull Moose Jackson, Earl Bostic. Jackson's band included Tadd Dameron on piano, and Dameron became his mentor and strongest influence as a composer. He was more and more drawn to writing music, and he began handing out lead sheets to every bandleader and musician he met. He didn't know if anyone actually looked at them until he gave one to his best friend from the open window days. John Coltrane had just been summoned from Philadephia, on the recommendation of fellow Philly cat Philly Joe Jones, to join Miles Davis' band, and he brought the lead sheet for "Stablemates" with him. When that record came out, musicians all over began digging through their piles of lead sheets and saying "Golson? Wasn't that the name of the kid who...?" Tadd Dameron once said that the most important element to him in a composition was beauty, and that's a lesson that Golson learned. His work is simple, direct, melodic and beautiful. If a tune like "I Remember Clifford" weren't complex and capable of great musical exploration, it wouldn't have been recorded so many times, even by young musicians who don't remember Clifford. But the simplicity and beauty come first.

And although there aren't any greatest hits from Golson's pen on this album, those qualities are very much in evidence -- beauty, simplicity, melody.

"Stacatto Swing" is a play on one of his big ones, "Blues March," recorded the year before by Art Blakey's Jazz Messengers. "Blues March" was an unlikely combination. When Golson told Blakey he was writing it, Blakey advised him to forget it. No one wanted to hear a march, and nothing could be a march and the blues at the same time. But when they debuted it at Smalls Paradise, a club known for a listening, not a dancing audience, chairs were kicked back right and left as couples couldn't keep to their seats. "Stacatto Swing" is not as insistently stacatto as "Blues March" is with its smoky march beat, but it's a melody as lovely as any in Golson's better known songs.

Curtis Fuller is the other horn on the session, and he would stay with Golson in 1960 as they joined forces with Art Farmer to make the Jazztet. Ray Bryant is a continuing supportive presence, and here he brings his brother Tommy to take over the bass duties. Al Harewood makes his Prestige debut here. but he was an in-demand drummer, and had worked with Curtis Fuller on two other recent sessions, one of which--for Savoy--had also included Golson.

The session was produced by Esmond Edwards. The album appeared on New Jazz as Gone With Golson. Curtis Fuller's one contribution as composer, "A Bit of Heaven," was left off the album but included in a later CD rerelease.

Benny Golson continues to perform as of this writing.

An important reference book of all the Prestige recordings during the time
period. Furthermore, Each song chosen is a brilliant representation of
the artist which leaves the listener free to explore further. The
stories behind the making of each track are incredibly informative and
give a glimpse deeper into the artists at work.
--Murali Coryell
Posted by Tad Richards at 2:09 AM