Art (here Arthur) Taylor has recruited two veteran tenor players here, given them a lot of room, and returned Prestige, for this session at least, to that bopcentric universe from whence it sprang. He’s made the wise decision to enlist the services of Thelonious Monk in two different ways. First, he plays two of Monk’s best known compositions, “Rhythm-a-ning” and “Straight No Chaser.” Second, he calls in Charlie Rouse, just as Rouse is beginning an association with Monk will will last a decade and beyond, and make him the musician most closely associated with the master. You could even make a case for a third connection, in that Taylor and the group also play a Rouse composition. 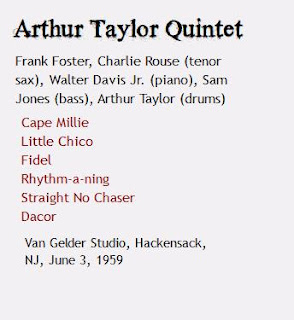 Both of Taylor’s tenors are guys with long-term musical commitments: Frank Foster spent many years with Count Basie, and became the leader of the Basie orchestra, just as Rouse would later form Sphere, a group dedicated to playing Monk’s music.

So...a front line made up of the quintessential Monk guy and the quintessential Basie guy. An impossible mismatch? No. This is jazz. Bebop is a lingua franca. So is the blues. So is improvisation, because when you're playing a tune which is going to go from the written melody to an improvised line by one soloist that will create something new in that moment, it demands of the other musicians that they listen, and be prepared to build on something that's rooted in a chord structure, but that has no precedent, and will demand an equal level of creativity.

New to Prestige with this session is Walter Davis Jr. Davis had been making a name for himself in 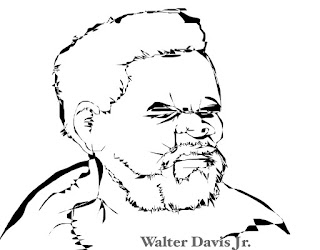 New York jazz circles throughout the 1950s, playing with many of the top names in jazz, including Charlie Parker, Max Roach and Dizzy Gillespie, and he had recorded with Gillespie's big band, but 1959 was really his breakthrough year on wax. He had played on a Jackie McLean session for Blue Note in early May, for which he had contributed four original compositions. Then, at the end of the month, a busy time. In the studio with Charlie Rouse and Art Taylor for a Donald Byrd Blue Note session on May 31, then back again on June 3, with Rouse and Taylor again, for his Prestige debut. He was making a name for himself as a composer as well as a pianist, contributing two originals to the Byrd session and one to the Taylor session, and in August he would make his debut as a leader, again for Blue Note, in an album of all originals.

Back is Sam Jones, one of the bass-playing greats (great solo on "Fidel," and presiding is Art Taylor, whose drum solo on "Little Chico" will stand alongside any drum solo you care to name. Composing credits, in addition to Monk, Rouse ("Little Chico") and Davis ("Cape Millie"), go to Taylor ("Dacor") and one absent friend, Jackie McLean ("Fidel"). 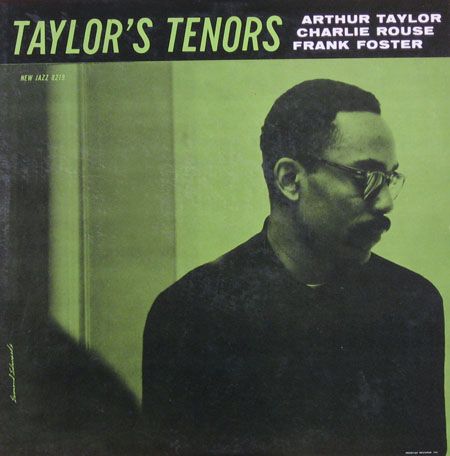 I'm finding myself fascinated with discovering the newly emerging (and mostly new to me, since I missed it the first time around) tenor sax/organ combos, and following the new direction that jazz will be taking into the 1960s, but I'm not quite willing to let go of bebop and hard bop either, and this album is deeply satisfying, partly because it gives me back that music I love, but also because you could have played this album on any day of any year and would be just as satisfying. It's that good.

It's hard to pick a "Listen to One," but I'm going to go with "Rhythm-a-ning." You can never go wrong choosing a Monk tune. The ensemble work by the two tenormen on that great tune is beautiful, and when they each get going, pushing each other, trading ideas, taking it further and further out, you have as good as definition of what's to love about jazz as you're likely to get. There are also solos by Davis and Taylor that make the whole package even better.

Taylor's Tenors was a New Jazz release. A few years later, this and the earlier Taylor's Wailers were released on Prestige as a double album, or a "Prestige Jazz Bonus Pack (2 albums for the price of 1)" with the Prestige All Stars labeling, that is, all performers getting equal billing, under the title Hard Cooking.