This is the second of three albums Benny Golson and Curtis Fuller made for Prestige, before they linked up with Art Farmer and went off to form the Jazztet. A tightly planned sextet had been on Golson’s mind for a while, and when he approached Farmer with it, Farmer shot back a note saying he’d been thinking along the same lines, and been on the point of contacting Golson.

This one features Golson playing more standards than originals. Which is actually the balance on Meet the Jazztet, too, though that album is mostly remembered for the great Golson original compositions, “I Remember Clifford,” “Blues March,” and especially “Killer Joe,” which was the new one. The originals for this album didn’t become classics, although “The Stroller” was originally written for Lou Donaldson, and has been recorded by Italian bandleader Giorgio Azzolini. 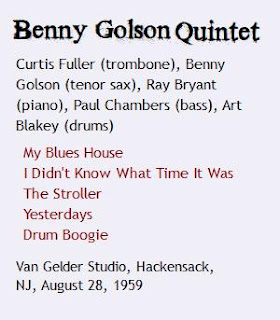 If "The Stroller" and "My Blues House" haven't become standards, hey certainly could have. They're in competition with some pretty high-level work in the Golson catalog, but as "lines... meant to be vehicles for blowing," in Golson's words, they fill the bill quite nicely.

"The Stroller" does anything but stroll, although its name doesn't come from its tempo, but from the practice of "strolling," playing a solo without piano backing. It's a high-octane thrill ride in bebop tempo,  powered by Art Blakey, with exciting solo space for everyone, leading off with three minutes of nonstop strolling by Golson, an including Paul Chambers on his signature bowed bass. "My Blues House," same good stuff, more relaxed tempo.

It's a little unusual to see one of Blue Note's marquee performers moonlighting on a Prestige session, but Blakey is here in support of one of the mainstays of his great late 1950s version of the Jazz Messengers. In addition to playing and composing, Golson also mentored the Messengers' Bobby Timmons through writing "Moanin'." 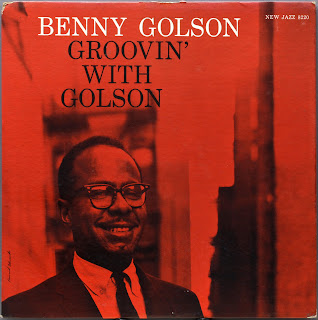 "Drum Boogie" is the Roy Eldridge/Gene Krupa classic vehicle for Krupa, generally including a vocal, most famously Anita O'Day.  It's so closely associated with Krupa that it's not all that often taken on by other artists, but we have heard it before on Prestige, from a Kenny Burrell-led group featuring Cecil Payne and Elvin Jones. Interestingly, even with the presence of Blakey on the one cut and Jones on the other, two of the most expressive and individual drum soloists in jazz, both groups treat it more as an ensemble piece, with a relatively short drum solo.

Golson's gone to two of the masters, Richard Rodgers and Jerome Kern, for the rest of the session.

Golson, in Ira Gitler's liner notes, discusses the musicians he chose for this session, starting with Curtis Fuller:


If I couldn't work with Curtis...I'd probably use another instrument for a two-horn grpup. We blend together so well, and he's always listening.

Fuller does a fair amount of listening here, as this is more of  a Golson showcase than the later Jazztet albums will be, but when he does solo, you can absolutely hear what Golson means about how well they blend.

Of Ray Bryant: "His harmonics are great and he is so melodic too." Of Paul Chambers:


For his age, Paul seems to have attained maturity on his instrument that usually takes years to acquire. His melodic conception is uncanny. When you're strolling ... you can 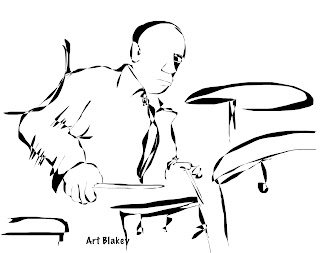 lean on him without ever having to worry.

And about his old boss:


I consider it an asset having Art Blakey on any record date I make. He has made it very hard for me to play with most drummers because he swings so hard and so constant. He's a dynamo. And such a feeling for the drums--he can express himself like a horn player.

A note in passing. It's been often remarked that jazz became mainstreamed into American culture during this era with jazz themes for TV shows like Henry Mancini's "Peter Gunn" and Count Basie's "M Squad, jazz soundtracks for movies like John Lewis's Odds Against Tomorrow, Duke Ellington's Anatomy of a Murder, and Elmer Bernstein's Man with the Golden Arm. Perhaps even more indicative of the mainstreaming of jazz was the way that TV and movie producers, even when they weren't looking for a marquee name for a highly promotable soundtrack or theme, still looked to jazz musicians. Benny Golson composed and arranged soundtrack music for any number of movies and TV shows, including Mannix and Mission Impossible(main themes by Dizzy Gillespie alumnus Lalo Schifrin), Ironside, M*A*S*H, and even The Partridge Family.