I've ignored an important milestone in jazz of the 1950s. In midsummer of 1959, Rudy Van Gelder moved out of his parents' living room and into his new studio at 445 Sylvan Avenie, Englewood Cliffs, NJ. This studio, designed by architect David Henken in consultation with Van Gelder and inspired, as so much architecture of the era was, by Frank Lloyd Wright, had 39-foot cathedral ceilings, and reminded many of a cathedral: Ira Gitler said that it could give you "a feeling of religion." It is a shrine to modern jazz, but even more than that, it was a great working studio, and Van Gelder kept developing it and improving it and recording music in it until shortly before his death in 2016. 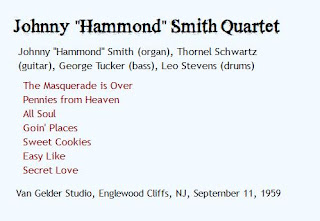 Ike Quebec was the first artist to record in the new space, on July 20, and Coleman Hawkins and Red Garland were the first Prestige artists, on August 12. My apologies for carelessness, and when this gets assembled in book form, it will be back to its correct chronology.

Johnny "Hammond" Smith's nickname was not to distinguish him from other organists, because they all played the Hammond, but to distinguish him from other Johnny Smiths, particularly the acclaimed jazz guitarist. Like many organists, he began on the piano, and like many before him, the sound of a pioneering organ virtuoso inspired him. Since he didn't come from Philadelphia, it wasn't Jimmy Smith. Born in Louisville, KY, Smith moved to Cleveland, where he first heard Wild Bill Davis. He was working at the time (1958) as Nancy Wilson's piano accompanist, but the organ won him over, to the point that when he made his 1959 debut as a leader, he had already folded "Hammond" into his name.

Smith had a real feeling for the funky qualities of the organ, and he would become known as the instrument's funkmeister as his career developed, and he was plenty funky as he began with Prestige, but he also showed his dexterity with standards, as was expected of an organ group in those days: "The Masquerade is Over," "Pennies from Heaven" and "Secret Love,," not quite a standard yet, although it certainly became one. Smith's was one of the first jazz renditions. 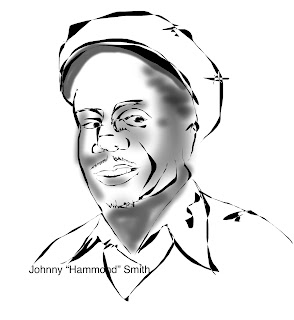 All of the musicians with Smith are also new to Prestige. Guitarist Thornel Schwartz understands and contributes to the guitar-organ dynamic which is developing as an important new thing in jazz, and he's a new phenomenon: a guitar-organ specialist. Schwartz was from Philadelphia, and he began his career with Jimmy Smith. He would go on to play with Larry Young, Charles Earland, Jimmy McGriff and Richard "Groove" Holmes.

George Tucker flew under the radar of publicity during his short life (he died of a brain hemorrhage in 1965, at age 38) but he left a powerful impression as a musician. On an Internet forum devoted to the discussion of jazz bass, a young fan writes about hearing him on a session with Earl Hines and Coleman Hawkins, and laments that he can't find anything about him: "Is George Tucker a highly regarded player? If so, why is there so little about him on the net?"

No one on the forum knows anything about him, but everyone, it seems, has a favorite recording:


Mr. Tucker plays on one of my all-time favorite "sleeper" discs, Jaki Byard's Live!! at Lennie's On the Turnpike.

Not to mention an Illinois Jacquet date with Alan Dawson and Barry Harris also live from Lennie's called Bottoms Up.

Check out a Zoot side w.Dave McKenna and Dannie Richman on drums playing more trad type tunes...the album is called Down Home.

I came across George Tucker's playing on the Stanley Turrentine record, Look Out! I particularly appreciate the amount of space and bluesy-ness Tucker applies to his solo on 'Yesterdays'.

Tucker had already built an impressive resume by the time he made his Prestige debut with Smith: Curtis Fuller, Bennie Green, John Handy, Slide Hampton, Melba Liston. He would become a mainstay of Prestige recording during the early 1960s before his death.

Leo Stevens had been with Smith from the beginning, and remained with him for many years. He doesn't appear to have moonighted beyond his work with Smith, but he was an important part of Smith's jazz-funk sound.

Maybe the best word for Smith's debut recording is "ingratiating." His general attitude seems to be "there's no way you're not gonna like this, and unless you're an unreconstructed organ combo-hater, that's going to be pretty much true. "Sweet Cookies" is a pretty good place to start hearing how that works. It's a Smith original, and it opens with a groove nearly as irresistible as "Honky Tonk," to draw you in, and then without ever losing that, it develops textures, does those things with tonality than only an organ can do, and includes terrific guitar solo from Schwartz.

The album was released from New Jazz as  All Soul, and the title cut, b/w "The Masquerade is Over," was released on 45 RPM two different ways: under the Prestige label, with "Masquerade" as the A side, and on New Jazz, with "All Soul" on top. The significance of an A side was basically that when the record was advertised in the trade publications or promotional cards were sent to record stores, the A side got the major ink. On jukeboxes, the A side was the top listed. When the record was sent to disc jockeys, it was sent with instructions (perhaps along with payola) to play the A side, and generally those instructions were followed, although there are famous stories of B sides that eclipsed their leaders, including one funky organ classic. "Behave Yourself" by Booker T. and the MG's was going nowhere until a few enterprising DJs flipped it over and started playing the B side, "Green Onions."

"Sweet Cookies" was also a New Jazz 45, with "Secret Love" on the flip side.

An important reference book of all the Prestige recordings during the time
period. Furthermore, Each song chosen is a brilliant representation of
the artist which leaves the listener free to explore further. The
stories behind the making of each track are incredibly informative and
give a glimpse deeper into the artists at work.
--Murali Coryell
Posted by Tad Richards at 10:28 AM