K. C. Douglas has the kind of easygoing command of both his voice and his guitar that can go all night, and on this recording session, produced in Oakland by Kenneth L/ Goldstein and Chris Strachwitz,and engineered by he did exactly that, or pretty darn close to it, recording 23 songs that would go onto two separate albums (double albums weren't really a thing in those days).

The rediscovery of the blues was starting to heat up by 1961. Strachwitz, a German-born blues enthusiast living in northern California, had founded Arhoolie Records, one of the most important blues labels of the era. He had gone to Texas with the idea of

recording Lightnin' Hopkins live in a local beer joint, only to find that Hopkins had given up the beer joints and was in the process of decamping for the coast. Frustrated, he cast about for another local bluesman in another beer joint, and discovered Mance Lipscomb, a 65-year-old tenant farmer and son of an emancipated slave, who had never recorded before. Lipscomb was a major find, and became a fixture on the folk and blues circuit. He recorded Douglas a number of times over the years, licensing this session to Prestige, and hanging on to other cuts, eventually releasing them on Arhoolie in 1998.

Douglas had performed on one recording before, by his friend and West Coast compatriot, the harmonica player Sidney Maiden. It was recorded in Berkeley, quite likely by Strachwitz, although I haven't been able to find that information. Although Maiden frequently backed him up in performance, and on earlier recordings, Douglas goes solo here. The session notes indicate that it was done in two sessions, both on the same day. The first session, which made up the album K. C.'s Blues, is all original songs. The second, which became Big Road Blues, is largely songs by others.

Douglas is a good enough writer in the blues vein to carry an entire 12-song album, and he doesn't even include his best-known song, "Mercury Blues," which was a minor hit for Douglas in 1948, and a major hit for country singer Alan Jackson in 1993. It has also been recorded by Steve Miller, Jackson Browne, Dwight Yoakam, and several others, including Finnish rocker Pave Maijanen as "Pakko Saada BMW" (where it becomes a foreign import--the title translates as "Gotta Get a BMW"). 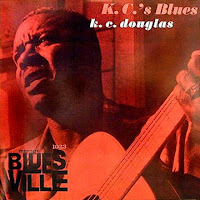 It does include songs about good women who leave and bad women who don't ("Ain't no tellin' what she might do / She might cut you, and she might shoot you too"). He can go after women like a rootin' ground hog or a watchdog trying to find a bone, which is not likely, because he's been replaced by a younger watchdog. Hey, this is the blues.

The second session begins with Tommy Johnson's "Big Road Blues," which has been widely recorded, and was the subject of a fascinating book by blues scholar David Evans. He gives a little Howling Wolf, and a little Big Bill Broonzy, and Jim Jackson's classic take on "Kansas City." "Bottle Up and Go" has been done by a plethora of bluesmen under a plethora of titles: "Borrow Love and Go," "Step it Up and Go." I know it best by Lead Belly, but it's originally by Mississippi bluesman Tommy McLennnan. When a guy can play and sing all night, it's good that he knows a whole buncha songs.