Back in 1949, when Bob Weinstock originally went into the studio with Lennie Tristano, everything was on 78, and a recording session was generally four tunes, for two 78 RPM singles. When the LP revolution took hold, a session was almost always a full album's worth of music, even if not every tune from the session made it onto the same album. This is the first time Prestige has booked a session to produce one 45 RPM single...if they produced it. It wasn't cut in Englewood Cliffs, and we have no session notes identifying the players, so it was more likely cut by Gonzales himself at a studio somewhere in town, and then sold to Prestige. 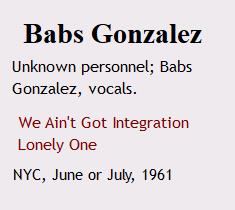 However it happened, it's a very worthwhile addition to the Prestige catalog: one romantic ballad and one novelty number with a political bite.

In 1961, the civil rights movement was active and growing. Martin Luther King was at the helm of the Southern Christian Leadership Council, and the Student Nonviolent Coordinating Committee (SNCC) had recently formed, a younger, more impatient group. But humor as a weapon in the civil rights struggle was still in its infancy. Dick Gregory was about to change all that. Discovered by Hugh Hefner in a Chicago nightclub, he became a regular at the Playboy Club, a frequent guest on the Tonight Show with Jack Paar, and a familiar voice on best-selling comedy records. But Babs Gonzales has to be one of the first to knock on that door. It's a shame that the jazz community and the folkie community didn't have much overlap, or "We Ain't Got Integration" could have been a lot better known/

"Lonely One" is the ballad. The guy who calls himself "Little Danny" and runs a very interesting blog about music called Office Naps has a lot to say about this song, and the genre of music it stems from, so I'll give him the floor.

He begins by discussing some of the reasons why jazz-inflected vocalists became so popular starting in the 1960s: 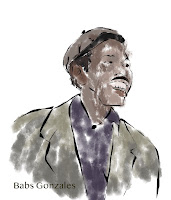 sensitivity of vocal performances on the long-playing album format, most of all its quiet ballad performances.  Superlative examples like Helen Carr’s Down in the Depths of the 90th Floor, Johnny Hartman’s Songs From the Heart, Chris Connor’s Sings Ballads of the Sad Cafe and Mel Torme’s It’s a Blue World were hushed expositions of atmosphere and stylized loneliness.  They sounded great on hi-fidelity stereos.   So did Peggy Lee’s Dream Street, Nat “King” Cole’s Love is the Thing, Frank Sinatra’s In the Wee Small Hours, Jeri Southern’s Coffee, Cigarettes & Memories and all of Julie London’s early small-group releases – releases that, incidentally, sold very, very well.


And so the working reality of smaller, quieter supporting groups, the vogue for torch-y jazz ballads and the affordances of modern recording technology that, made, in turn, these captured performances a rewarding experience for at-home listeners guaranteed that lot of jazz and jazz-inspired vocalists cut records in the ’50s and ’60s.  Together they loosely form a fascinating, often obscure, discography of LPs and 45s.

Little Danny's main focus in his blog is individual 45 RPM records, and he goes on to consider "Lonely One":

A true original, Babs Gonzales led a fascinating, colorful life, working, in addition to myriad odd jobs, as singer, lyricist and composer, bandleader, poet, manager and active proponent of jazz and jazz culture.  However, if it’s hard to pin down exactly what Babs Gonzales was, it’s because he was first and foremost a personality – a scenester, a tireless self-mythologizer and authentically colorful character.


Born Lee Brown in 1919, Babs grew up in Newark, New Jersey.  Early on he showed an aptitude for music, growing up playing drums and piano and singing in local clubs barely out of his teens.  He had a gift for adopting personae, too, reinventing himself as Gonzales while living in Hollywood, where he famously worked as Errol Flynn’s 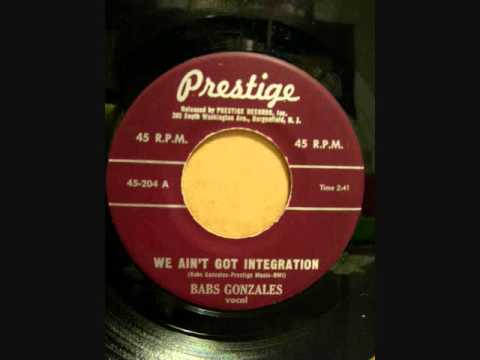 
Gonzales returned and inserted himself into the jazz and creative world of post-War New York City, working and living there – singing, writing, recording, collaborating, hustling, generally presiding – on-and-off, with some obligatory spells in Europe, until his passing in 1980....


His most important 78 sides were recorded between the mid-‘40s and the early ‘50s, during which time he sang with top-tier beboppers – including James Moody’s orchestra and Babs’s own group, Three Bips & a Bop – and released some of his best-known compositions, including “Oop-Pa-A-Da,” recorded by Dizzy Gillespie in 1947....


Atmospheric and stunningly beautiful, “Lonely One” belongs among those [his serious, dark songs]. Recorded with an unknown trio for the great Prestige Records in a comparatively late 1961, Babs brings such harrowing, effective feeling that one wishes for more like this, but, sadly, this would be among of his last “serious” recordings as a jazz singer.

"We Ain't Got Integration" / "Lonely One" was only released on 45, and has never been included in subsequent compilations by Prestige, Fantasy, or Original Jazz Classics.