This blog grew out of a few different impulses, but one, certainly, was something that Peter Jones and I had agreed on, coming out of one of our many discussions of the music of our youth: that the recorded jazz of the 1950s, on the great independent jazz labels like Prestige and Blue Note and Riverside, had all been good.

Was it really? Or were the rose-hued glasses of nostalgia coloring our vision? After all, we couldn't have listened to everything. And our limited teenage record-buying budget meant that we were mostly spending our money on albums that had gotten four or five stars from Down Beat. And the Jazztone Society's album of the month, during the time of that great but failed experiment. And the 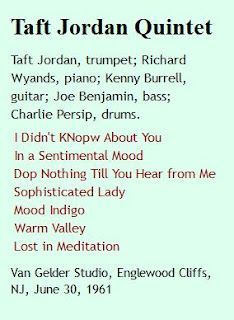 Listening to every single recording session from the entire decade seemed like a pretty good test/ And the conclusion was yes. It was all good.

The 50s were our decade of pure passion, and I wasn't so sure the 60s were going to measure up, but so far, so good. And more of it is new to me. Some of it is surprising, some of it amazing. Mal Waldron, Eric Dolphy, Booker Ervin, Ron Carter...an album I'd never heard, that ascends to the level of greatness. And fresh, orginal, revolutionary--even 60 years later. That shouldn't be so surprising. Charlie Parker, Dizzy Gillespie and Thelonious Monk sound fresh, original, and  revolutionary 80 years later. And Louis Armstrong, 100 years later. But this was music I'd never heard of before.

You're not going say the same thing about Taft Jordan playing Ellington. Letting the world know that Mal Waldron was one of his era's great composers is a thrill in itself. If I tell you that Duke Ellington was one of his era's great composers, I'm not exactly going to be in the vanguard, am I? And if I tell you what a service Bob Weinstock performed for posterity by recording some of the older jazz artists on Swingville and Moodsville, this is worth saying, but I've said it before. 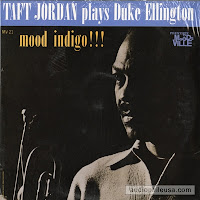 So I don't have anything exciting to tell you today, except that the string continues. All good.

How could it not be? Ellington veteran Taft Jordan playing some of the Duke's best-loved tunes, and the reason why they're best-loved is...you can't help but love them.

Kenny Burrell! After a few years' absence, he's back for two Prestige sessions in 1961: Coleman Hawkins in February, and now on board here with Jordan. Always welcome. He'll be back off and on over the decade.

It tool Listening to Prestige to introduce me to Richard Wyands, and now that I know about him I smile whenever I see name on a session. I know he's going to be giving me some good piano.

And what about Joe Benjamin and Charlie Persip? From the angularities and intricacies of Waldron/Dolphy to the sweet swing of Ellington/Jordan. What time is the gig and where is the studio? Thank you, ma'am, and let's play some jazz. Play it pretty for the people. Play it loud, play it clear, for the whole world to hear. Play everything cool for me and my baby. Taft and fellas. You've got me in the palm of your hand.