This is the second Roy Haynes trio album for Prestige. The first was the November 1958 date, We Three, with Phineas Newborn and Paul Chambers. Of that session, I said:


These are three players who mesh to make a perfectly attuned ensemble, working together seamlessly and supporting each other's solos.

That's true again here. If Haynes' new trio doesn't have the star power of the first, it certainly has the firepower. This album eschews the arty We Three for the folksier Just Us, and it's a friendly kind of album, with some powerful drum parts and some very tasty bebop, original, uptempo and ballad. 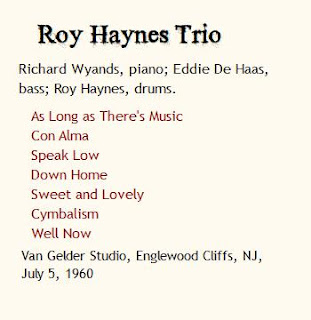 Haynes worked with Richard Wyands on the Etta Jones session, and you can see why he wanted to work with him again.

Eddie De Haas was new to Prestige, and new to me--I had not heard of him before. But if you are from Chicago, and a jazz fan, you quite likely have heard of him, for the music and civic involvement that he and his wife Geraldine gave to the City of the Big Shoulders. When they retired in 2103, because of health problems, to go and live with family in New Jersey, here's a part of the tribute columnist Howard Reich of the Chicago Tribune gave to "two artists who have been central to jazz here for nearly half a century":


It was Geraldine de Haas, after all, who led many like-minded spirits in creating the first Duke Ellington celebration concert in Grant Park, in 1974, just after the master's death. The event proved so successful that it became an annual soiree, paving the way for the emergence of the Chicago Jazz Festival in 1979 and setting the stage for all the other city-sponsored music fests that followed.

When de Haas launched her campaign to stage the aforementioned Ellington tribute in Grant Park, she faced widespread resistance, even from fellow jazz musicians.

"The South Side musicians were talking about doing (the Ellington homage) on the South Side of Chicago" in Washington Park, recalls de Haas. "My suggestion was: 'Why don't you do it in the main park (downtown)? Duke Ellington was so important to all of us.'"

Geraldine got it, in spite of resistance from the city parks commissioners, who one has to assume were white. They told her there had been riots the last time they tried to hold a jazz concert. Riots? Jazz? It turned out they were talking about Sly and the Family Stone. 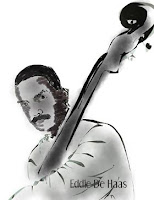 But if Gerald wanted to give jazz to the whole city, "bringing jazz to a major downtown setting – and therefore bringing black, white and others together in a dramatic way that reflected both the cross-racial appeal of the music and the unifying characteristics of Ellington's art," she didn't forget the South Side either, creating a new and successful festival, "Jazz Comes Home," in 1981. In her words, again quoted by Reich,


"It was time to expose the music to the young people" where they lived, says de Haas. "The legacy left by a lot of African-American musicians – they needed to know about it. That was one of my missions in Chicago."

Eddie De Haas was born to Dutch parents in Bandung, Java. His first instrument was the ukulele, playing Hawaiian folk songs and the music of the South Seas. He fell in love with jazz when he moved to the Netherlands as a teenager in 1946, and switched to the guitar and what would become his main instrument, the bass. He began playing with Dutch jazz groups,, and then with expatriates Don Byas and Bill Coleman, and with touring American acts like Zoot Simsm, Dave Amram  and Chet Baker. He came to the USA in 1956.

This is a terrific album, high-spirited, even a little rowdy for a piano trio of very sophisticated musicians. It has lots of solo space for all three, lots of unexpected flourishes, lots of fun.

Just Us was a New Jazz release, Esmond Edwards producing. We will get to hear Geraldine too, in a while. In 1964-65, she recorded for Prestige with her brother, vocalist Andy Bey, and her sister Salome. 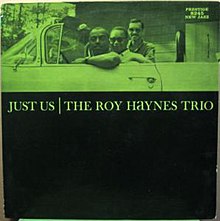 The De Haas children, Aisha and Darius, have also had successful musical careers, especially Darius, who has appeared on Broadway in Rent and other musicals.

A special note of appreciation. As of this writing -- February, 2019 -- all three of these great musicians, now nonegenarians, are still with us.
Posted by Tad Richards at 2:01 PM