The Latin Jazz Quintet, as an ensemble (although a somewhat different ensemble each time) recorded twice for Prestige in 1960, the second time with Eric Dolphy. The Dolphy collaboration is probably better known, but this one with Shirley Scott certainly bears listening to. I've written a lot about Scott, and will be writing a lit more, so I'll focus here on the LJQ.

The leader of the quintet was conguero Juan Amalbert, who would later change his name to Emmanuel Abdul-Rahim. Information about him is hard to come by, but tantalizing. A complete list of the artists he has worked with as musician, producer, conductor or arranger is available at the website of Tomas Pena, and it is staggeringly impressive. He has appeared on record with Duke Ellington's orchestra twice, once as Amalbert and once as Abdul-Rahim. Of that latter appearance, on an album calledThe Jaywalker, critic Norman Weinstein wrote: 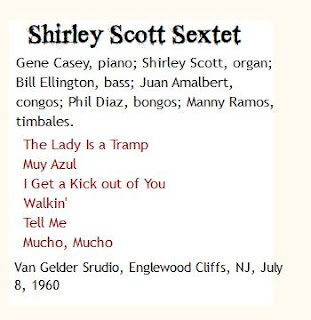 So what makes The Jaywalker memorable? The Ellington band is joined by a percussionist, Emmanuel Abdul-Rahim. The empathy between Abdul-Rahim on conga drums and Ellington on piano is as imaginative as anything you'll find in Ellington's output during these years. What Chano Pozo was to Dizzy Gillespie, Abdul-Rahim might have been to Ellington, had they had a longer musical relationship. Odd that Ellington didn't establish more working relationships with conga drummers, but we can be grateful for the ecstatic conversation that Abdul-Rahim and Ellington establish.

He appears to be still performing with a group called the Swing Prophets. They have an active Facebook page with the message that "we The Swing Prophets are hitting as many clubs and festivals as possible in 2018."

Gene Casey had a remarkably varied career. He would appear on a handful of Prestige albums in the 1960s, and then reappear as musical director and pianist for LaBelle on their debut album, released in 1971. The sources for career as a jazz and funk musician do not mention a second career as a composer, and the website for the Pioneer Drama Service, a theatrical resource, don't mention his jazz-funk work. There, he is primarily noted for "Hubba Hubba, a 1940s style musical that premiered in 1970 at the Goodspeed Opera House in Connecticut and had a run at the Manhattan Theatre Club." Pioneer also credits him with:

co-writing "The Orphan's Revenge," which had extended runs at Ford's Theatre in Washington and the Thunderbird Hotel in Las Vegas.  His children's musical, "The Magic Weave," has toured extensively nationwide.

Casey also wrote songs for two Gallagher comedy television specials and for "Trapper John, M.D.," "McCloud" and other TV series.  As an accompanist, he played piano for an array of performers, including Edie Adams, Kaye Ballard and Liza Minnelli.

We know that Duke Ellington's mother called him Bill, but this is a different Bill Ellington altogether. He is primarily known for his work with Amalbert/Abdul-Rahim, but he also performed with Mal Waldron and others.

Felipe "Phil" Diaz is listed in the session notes as playing bongos, but he was primarily a vibraphone player and can be heard playing some mean vibes on this session, particularly on "Mucho Mucho." He may also being playing bongos, but if so, they're less audible.

On this date, they do a couple of standards, a couple of Scott originals, and a slam-bang version "Walkin'," best known from Miles Davis's Prestige recording, written by Jimmy Mundy but credited to this day to notorious song thief Richard Carpenter (not the one from the brother-sister duo).

"Mucho Mucho" is an extended jam that takes up the better part of one side of the album, and became the title cut. Esmond Edwards produced.