Jack McDuff's second outing as a leader for Prestige takes him out of the Willis Jackson-Bill Jennings orbit, and playing with an ad hoc group featuring veteran Jimmy Forrest and relative newcomer Lem Winchester (who has done an organ-sax-vibes session before, with Oliver Nelson and Johnny "Hammond" Smith), with a youngater, Bill Elliott, rounding out the quartet on drums. It's a good amalgam. The solosists are able to find common ground--a couple of common grounds,in fact. On the standards--"Mean to Me" and "Autumn Leaves," they're melodic. On a McDuff original like "Yeah Baby," they know how to let loose and blow. 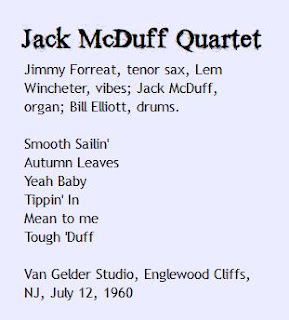 Both "Mean to Me" and "Autumn Leaves" are taken at sprightlier tempos than one is used to hearing, and why not? The falling leaves of autumn don't always have to be an occasion for wistful sighing. You can play in them too, rake them up into a big pile and jump into them. Forrest takes the main job of the melody in this one, and does some very nice things with it, particularly at the end, where brings some wonderful smeary bluesy sounds to a melody not previously known for its affinity to the blues. "Mean to Me" is slyly playful, and again, why not? "You're so mean to me" can be a tease as well as a plaint. Winchester does some particularly strong solo work on this one.

"Yeah Baby" is nine minutes long, and gives each of them, including drummer Bill Elliott, a chance to shine. This is Elliott's recording debut, the start of a career that was always interesting, but only rarely in the field of jazz  drumming. For a while he led a soul group, which is remembered chiefly as the 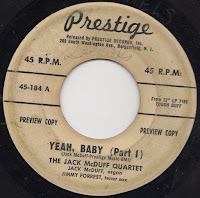 launching pad for one of its backup singers, Dionne Warwick. During the 1970s, she and Elliott were married, divorced, married again, and finally divorced again. Elliott also had some success as an actor, debuting on TV with a featured role in Dragnet,  and then appearing as a recurring character in Bridget Loves Bernie. He also made a few movies, including Elvis Presley's Change of Habit.

The quartet is unusual in that it doesn't include a bass. The line that would normally be played by the bass is handled by McDuff himself on the Hammond,