I suppose one could look ar this period as sort of an interregnum between John Coltrane and Eric Dolphy. Dolphy had actually made his Prestige debut the previous month, but although it was titled Outward Bound, it wasn't as outward as Dolphy was going to go, and though his era was poised to explode, it hadn't quite done so yet.

One could look at it that way, but one would be wrong. Jazz doesn't begin and end with the superstars, and it doesn't exist only on the cutting edge. Or maybe it's always the cutting edge, because you're out there every night taking risks, which is the definition of improvisation, whether you're John Coltrane playing every note there is at the same time or Ahmad Jamal playing cocktail hour at the Pershing Hotel for salesmen who don't care that you're giving 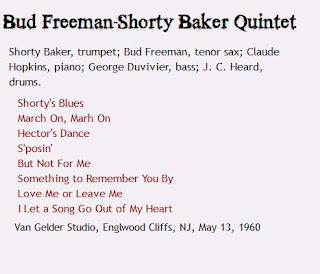 lessons in the possibilities of jazz improvisation, or Henry "Red" Allen playing for the lunch crowd at the Metropole. And if Prestige in the 1960s is remembered more for Dolphy than for the Swingville and Bluesville and Moodsville recordings,  these labels recognized the fact that jazz was living history, and the people who had made that history were still living and playing, which made it a lot more than just history.

Bud Freeman came out of the Chicago high school band that became a legend, the Austin High School Gang with Jimmy McPartland and Frank Teschemaker, and he grew to be known as the master of the swing era tenor saxophone. In 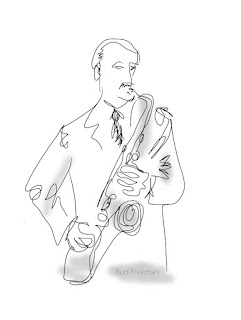 fact, he was one of the original jazz tenormen, since it was not an instrument common to that style of music, and he developed a sound all his own--Lester Young counted Freeman as one of his early influences. He never lacked for work, or for people who wanted to record him, be they major labels (Columbia), top independents (Bethlehem), labels not much given to jazz (Dot), or more obscure small labels. This would be his only recording for Prestige.

It was one of the very few small group recordings Shorty Baker would make for any label, and the only one where he got featured billing. Baker was a respected section man who played off and on with Duke Ellington's orchestra during these years, and he makes the most of his chance in the spotlight. You wouldn't be looking for this album to fill out your Shorty Baker collection, because you won't have a Shorty Baker collection, bur he plays well enough on this session to make you glad you've had a chance to hear him. Claude Hopkins was brought to Prestige by Chris Albertson to play on Lonnie Johnson's first session, and was brought back to make an album under his own name, which featured J. C. Heard on drums. George Duvivier, of course, is an old friend.

Like most of the Swingville sessions, these are musicians who got their start in an earlier era, but didn't stay there--in fact Freeman, though he continued to play in a traditional setting, with Eddie Condon, with Yank Lawson and Bob Haggart's World's Greatest Jazzband, and with his own groups, had studied for a while in the late 1940s with Lennie Tristano. Freeman, in a 1980 conversation with radio interviewer Studs Terkel, said "My old fans would prefer that I play the way I played a hundred years ago, but I prefer to play the way I feel, and I feel that I'm improving."

The Swingville album is called The Bud Freeman All Stars Featuring Shorty Baker.

Listening to Prestige Vol. 3 makes a great Christmas gift for the jazz fan who has Volumes 1 and 2!

And for those who haven't, the complete set makes a fabulous gift!
Posted by Tad Richards at 2:22 PM