Doug Watkins was one of the most prolific sidemen of the 1950s. He's been on 26 Prestige albums so far (including Sonny Rollins' Saxophone Colossus) and countless more sessions on other labels. He was so respected as a bassist that when Charles Mingus took to the piano for 1961's Oh Yeah (Atlantic), he picked Watkins as his bassist.  But he almost never stepped out as a leader. He had done one album for a small label in 1956, and nothing more until this session.

What made him decide to put himself out in front?

A newfound passion. One of the most respected bassists in jazz, Watkins, like Mingus before him, turns the bass duties over to someone else, and takes on another instrument: his newfound passion, the cello.

How newfound was this passion? It's said that he picked it up three days before the recording date. 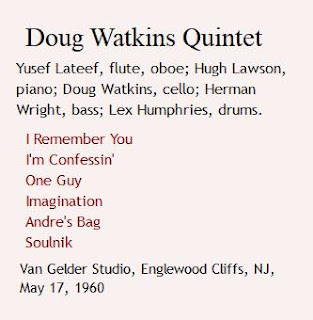 It's a shame that Detroit has come to be known as a blighted, crime-ridden city, because it has been a cultural capital.  It was a cauldron of jazz before jazz came to be recognized as America's seminal art form. And it produced the man who was arguably the greatest poet of his generation, Philip Levine.

Levine nurtured his art on the assembly lines of Detroit, just as Yusef Lateef did, and also in the jazz clubs of Detroit, where he heard the greats who made it their home. Poet T. R. Hummer, in an essay in the literary journal Blackbird, says that:

Some were classmates of his at Wayne University as it was called then: the guitarist Kenny Burrell was there, as were the pianists Tommy Flanagan and Bess Bonnier; they were close friends and peers of Levine’s then, as was the great and inimitable baritone saxophonist Pepper Adams, and the drummer Elvin Jones.


And he heard the greats who passed through, like Clifford Brown, whom he remembered as Benny Golson did:

Wakening in a small room,
the walls high and blue, one high window
through which the morning enters,
I turn to the table beside me painted a thick white. There instead
of a clock is a tumbler of water,
clear and cold, that wasn't there
last night. Someone quietly entered, and now I see the white door
slightly ajar and around three sides
the light on fire. I remember once
twenty-seven years ago walking
the darkened streets
of my home town when up ahead
on Joy Road at the Bluebird of Happiness
I heard over the rumble of my own head
for the first time the high clear trumpet
of Clifford Brown calling us all
to the dance he shared with us
such a short time. My heart quickened
and in my long coat, breathless
and stumbling, I ran
through the swirling snow
to the familiar sequined door
knowing it would open on something new.

Shortly before he died in 2015, Levine collaborated with jazz saxophonist Benjamin Boone for a unique album of poetry and jazz. Hummer writes:

Boone said that he had suggested to Levine that it would be more efficient (as well as less taxing: it must not be forgotten that Levine was in his 80s 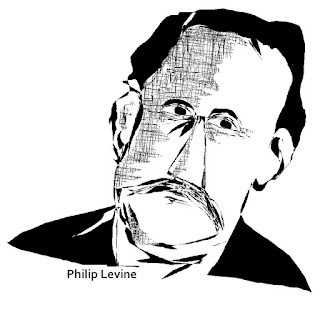 when this work was done) to record the music, at least the basic rhythm tracks, first and let him record his tracks after.

Levine’s response? “Why would I want to do that, Ben? I’ve sat in recording studios reading my stuff to myself plenty of times. I want to work with the musicians! That will be fun!”

And so the poet and the players convened session after session in a studio in Fresno, California, making the recordings. Another poet—especially one Levine’s age, who was also, by a certain point in the extended recording process, not in good health—might have found the lengthy, nitpicky process onerous. Levine loved it. He spent hours doing what is done in studios: sitting in a booth on a stool wearing headphones and staring at a microphone, recording take after take until everyone is satisfied, and then moving on to the next track. He stayed at it faithfully for the requisite long stretches.

The mixing of the album was not completed till after Levine died. When it came to mixing "I Remember Clifford," Boone was faced with a dilemma, according to Hummer:


For this poem, Boone composed a melody that is strongly reminiscent of, but not repetitious of, Golson’s composition. Anyone who knows Brown’s music is likely to know Golson’s composition, and so will be struck, as I was, by the extraordinarily tactful, effective work Boone did as a composer here.

But he did another excellent thing as well. Levine was always in the Fresno studio with basically the same core group of musicians. Boone is a saxophonist specializing in soprano and alto, each of which he plays wonderfully on most of these recordings (seriously, the man has deep and abiding chops; do yourself a favor and give him a listen) and he did the solo work on the original track. But as he listened to the playback of “I Remember Clifford” in the studio, and again and again at home, he found himself wondering, “Why is there a saxophone soloing in this? Clifford Brown played trumpet!”

“It was a tough decision, in terms of my own ego,” Boone told me. But in the end he contacted, through a friend of a friend, the trumpeter Tom Harrell. Harrell, now seventy-one, is a master musician who has played with just about everyone, from Stan Kenton and Woody Herman to Horace Silver on down. Who better to channel Clifford Brown?

So that's another part of Detroit. But here, for this session, the Motor City is represented by Lawson on cello and Lateef on oboe as well as flute, so they're stepping outside of the jazz box. Detroiter Hugh Lawson is the pianist. a cat who came from Detroit with Lateef and spent many years with him before moving on to Sun Ra and others.  Detroiter Herman Wright takes the bass duties, and New Yorker Lex Humphries is the drummer, in his first session for Prestige.

They play three standards, two originals by Lateef and one ("Andre's Bag") by Watkins. The album, on New Jazz, would take its title, Soulnik, from a Lateef composition. Prestige would later rerelease it under Lateef's name as Imagination, but it's very much Watkins' session, but the creativity and versatility on display here in Watkins' pizzicato cello would get little chance to grow and blossom. This would be his second and last album as leader; in 1962 he died in an automobile accident.


It' not too late to give Listening to Prestige Vol. 3 as a Christmas gift for the jazz fan who has Volumes 1 and 2!

And for those who haven't, the complete set makes a fabulous gift!
i