In presenting Shakey Jake (also known as Shakey Jake Harris, to distinguish him from the other Shakey Jake--yes, there was another one) continued three Prestige blues traditions. The first was to produce strikingly good records by first rate blues musicians. The second, unfortunately, was to consistently back the wrong horses. Shakey Jake would make two albums for Prestige Bluesville, then only three more, and a small handful of singles, over the next quarter century, so while he had the chops to ensure longevity, he wasn't able to break through the way his nephew Magic Sam did. A good part of his career was as a harmonica-playing sideman to Sam and other Chicago blues acts. 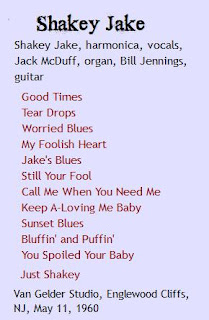 The third Prestige blues tradition was experimentation, mixing traditional blues artists with Prestige jazz artists, and if the results weren't a commercial breakthrough, they're artistically satisfying. The jazz voices are Jack McDuff and Bill Jennings, No drummer, which is interesting, because Jake comes out of the Chicago blues tradition, not the Delta, and he's certainly accustomed to working with some serious percussion. So here we have a most unusual conjoining of traditions: the folk blues sound of a very raw voice and harmonica with the modern but eclectic sensibilities of two jazzmen. Both McDuff and Jennings have played plenty of rhythm and blues, but that's not what they're doing here. They're finding new ways to augment a basic blues style. Especially Jennings. Every time he contributes a lick you find yourself listening to him, and yet he's not taking you away from the song as a whole. A pretty damn good trick. It's too bad that Shakey Jake didn't make it bigger. It's almost inexplicable that Bill Jennings didn't make it bigger.

The 45 RPM release from this session was "My Foolish Heart" 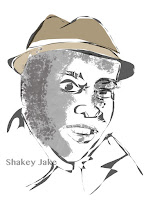 and "Jake's Blues," interesting choices. "My Foolish Heart" is, of course, not the syrupy Victor Young ballad from a movie of the same name, a tearjerker with Susan Hayward. And you know that comedy routine about what you can and can't do in the blues? You can't drive a Volvo or a BMW, and "persons with names like Sierra, Sequoia, Auburn, and Rainbow can't sing the Blues no matter how many men they shoot in Memphis." Well, you probably can't build a blues around a phrase like "My Foolish Heart," either, and even Shakey Jake doesn't altogether succeed, although he growls it like Screamin' Jay Hawkins and manages to be pretty entertaining. The same comedy routine says you can get a good blues name out of a physical infirmity, but Shakey Jake got his name a different way: from his fondness for shaking the dice. Reportedly, when he cut his first record, he didn't get paid for the session, but made up for it by winning $700 off the record label's owner shooting craps. 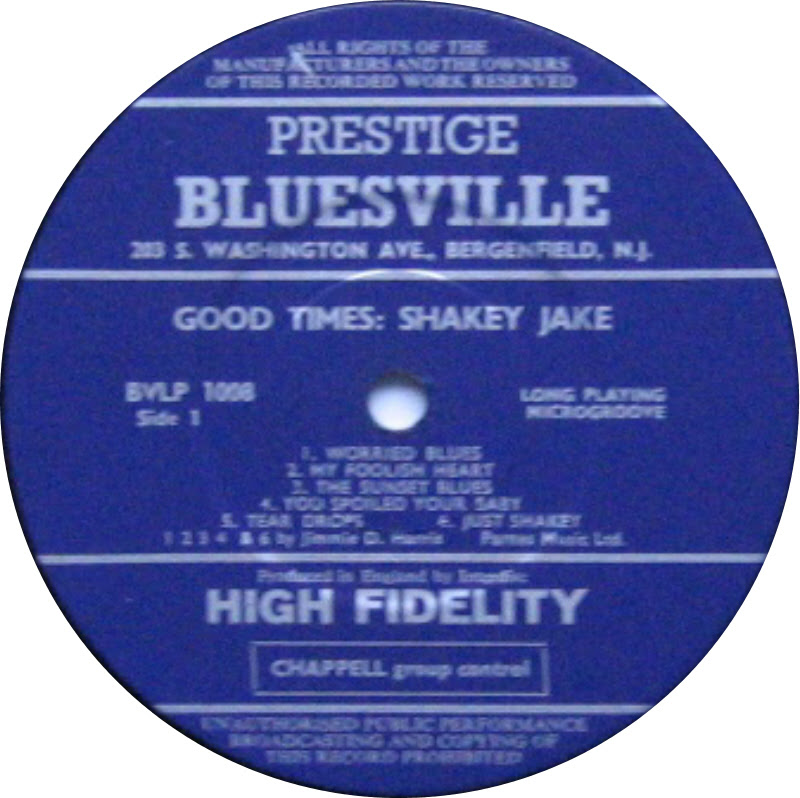 
Listening to Prestige Vol. 3 makes a great Christmas gift for the jazz fan who has Volumes 1 and 2!
And for those who haven't, the complete set makes a fabulous gift!
Posted by Tad Richards at 1:01 PM