The year 1959 was to yield Prestige one more major modern jazz talent, and his career was to be horribly short. That would be Lem Winchester, the vibes-playing cop from Wilmington, Delaware, who was introduced as a Leonard Feather discovery at Newport in 1958, made an album with Ramsey Lewis for Argo Records, and then settle with Prestige, for whom he would cut four sessions over the next two years, and then die of a self-inflicted gunshot wound in 1961--apparently an accident, although some rumors suggest Russian Roulette. 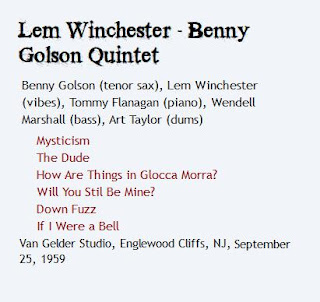 In 1957, Winchester was a young veteran police officer. He had a wife and family, and at his mother's insistence he had opted for job security and a steady salary rather than falling prey to the temptation to join his teenage friend Clifford Brown in decamping Wilimington for Philadelphia and the uncertain life of a jazz musician. But he had been gigging around his home town, and a local trio called John Chowning's Collegiates had dreams of glory, and of the Newport Jazz Festival. They decided to make a recording and sent it to Leonard Feather, and they figured they would have a better chance of being listened to if they added Winchester to their group.

They were partly right. Winchester made Feather sit up and take notice--but only of him, not the Collegiates. Feather put Winchester together with a somewhat more professional trio and presented him at Newport in 1958. This would also be Winchester's recording debut, as one side of a Feather-produced disk called New Faces at Newport (Randy Weston was the other new face). Winchester was backed by three fine musicians from Boston, Ray Santisi, John Neves and Jimmy Zitano. All three were stars of the vibrant Boston club scene, and had worked with major jazz stars like Charlie Parker and Stan Getz.

Winchester's group was billed on the album as the Patrolman Lem Winchester Quartet (he's in uniform on the album cover), and in fact he had not given up his day job. He still walked a beat in Wilimington, but now his moonlighting gigs ranged a little farther afield, including Chicago, where he made a record in 1958 with the Ramsey Lewis Trio. After that he signed with Prestige.

Pairing Benny Golson with Winchester was an excellent idea, although they don't avail themselves of Golson's compositional skills. The album is two Winchester originals (including "Down Fuzz," which has to be an allusion to his other profession), three standards, and one tune, the first recorded, by Len Foster, who seems to have no other credits as composer, musician or anything else. But it must have been a song both Golson and Winchester knew, leading me to guess that Foster must have been a part of the Philadelphia scene, because it's the tune they open their set with. Which means it's where we first hear Golson shape the sound of his tenor so that it becomes the perfect pairing with Winchester's vibes.

For the last tune of the day, Frank Loesser's "If I Were a Bell," Golson sits it out and lets Winchester show what he can do, which is a lot.

Signing up Lem Winchester must have been one of the highlights of what was already a banner tenth anniversary for Bob Weinstock. I bet he'd thought he'd be making records with him for years to come.