Johnny "Hammond" Smith and his Philadelphia cohorts go after some familiar standards here, and I do mean familiar. That gives him a more difficult task than you might imagine. These are super-familiar standards because people love them, so he's got to not alienate the multitudes who love them, while at the same time appealing to the esoterica-loving jazz hipsters who would rather run naked through Sam Goody's than listen to another rendition of "My Funny Valentine."

Or, especially, of "Autumn Leaves." This is 1959, and although there have already been several jazz interpretations (Jimmy Smith, Ahmad Jamal, Errol Garner), the one that's been inescapable since 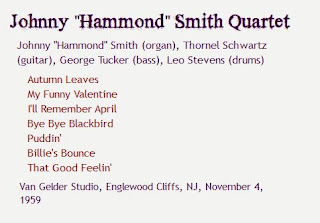 1955 has been the recording by Roger Williams, with its arpeggios run amok through jukeboxes, radio stations both top forty and traditional, and your aunt's living room, where her 9-year-old won't stop sliding his fist from top to bottom of the keyboard, yelling out "Hey, I'm playin' 'Autumn Leaves!'"

So, does Mr. Smith, otherwise known as Mister Hammond, succeed in keeping it recognizable, while at the same time making it hip, at least a little sardonic, different, and ultimately musical? To these ears, yes.

I like standards. I always cringe a little when a young jazz musician, especially a vocalist, announces that this set will be all originals, because not everyone is that good a composer. They call them standards because they set a standard, and it's a good standard to measure yourself against. Even the Beatles on their early albums, even Thelonious Monk -- and we're talking about composers on a level that you and I and the young jazz trumpet player in the next apartment can only dream about -- recorded their versions of standards (they're called "covers" in pop and rock; in jazz we call it playing music). The challenge Smith sets for himself--and he lays it right out there with "Autumn Leaves"--is not the 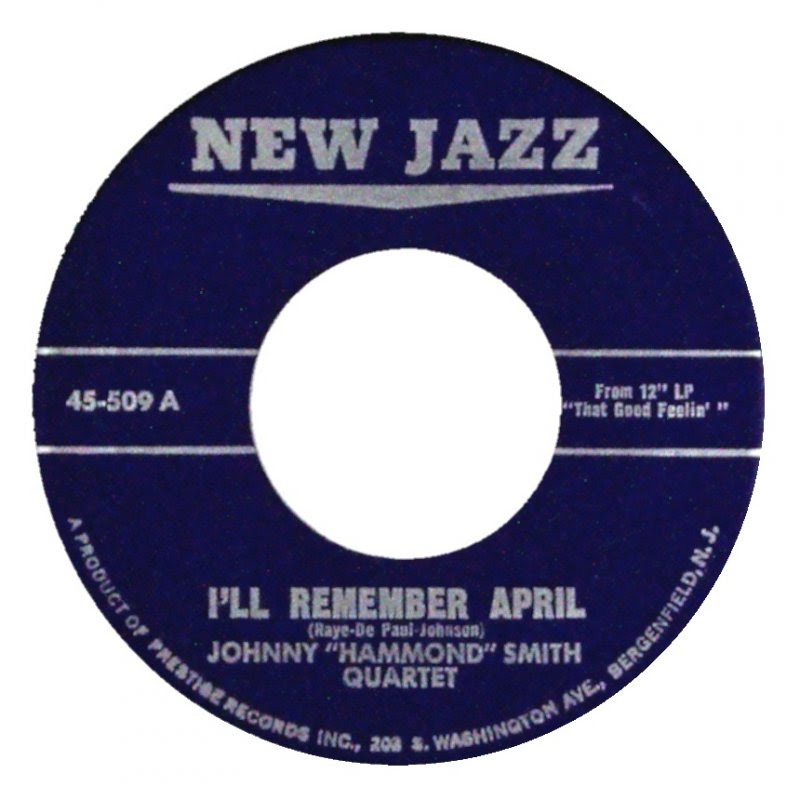 Well, now. "I'll Remember April." I was tempted to choose that as my "Listen to One," except it's not exactly reminiscent of anything except itself. This is an April that seems to have been remembered in a barnyard, with pigs and ducks and other farm animals doing the remembering, I love it. It's worth a trip to YouTube to check it out.

Charlie Parker's "Billie's Bounce" is a little different, Your task in playing a composition by Bird is not to find a new and hip way of interpreting it, but just to do it justice, and Smith comes through here, too.

Finally, balancing out the set, we have two Smith originals. The whole set has been about delivering that good feeling, and his own composition, "That Good Feelin'," is all about that--jaunty, bluesy and tuneful, and a good stretch on the Hammond. The other original, "Puddin'," also has a dropped "g," and also delivers in much the same way.

That Good Feelin' was the title of the New Jazz album. The 45 RPM single was "I'll Remember April," an interesting choice. Maybe not the one I would have picked if I were looking for maximum air and jukebox play, but refreshing. The flip side is "That Good Feelin'," which you can't argue with.

Tad Richards will strike a nerve with all of us who were privileged to have
lived thru the beginnings of bebop, and with those who have since
fallen under the spell of this American phenomenon…a one-of-a-kind
reference book, that will surely take its place in the history of this
music.
--Dave Grusin