This is Steve Lacy's second album as leader, both for Prestige. As long and productive as Lacy's career would go on to be, he's not immediately thought of as a Prestige artist, but Weinstock's label is where he got his start, first with Gil Evans and then under his own name.

This one is particularly noteworthy for two things. First, his quartet personnel has changed. Buell Neidlinger returns as bassist, Elvin Jones is the new drummer. Most significantly, he is put together with the Prestige "house pianist," Mal Waldron, a pairing that was to be of great significance to both men when they reconnected years later in Europe. 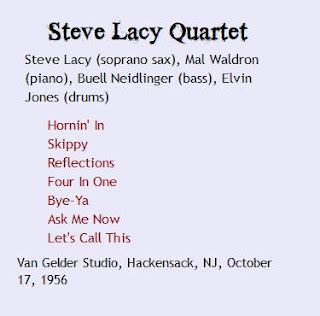 Second, the entire album is devoted to the compositions of Thelonious Monk. Lacy was an admirer and champion of Monk's work, and tried to include at least one Monk composition on every recording he made, but this is the first time an entire album has been devoted to this great composer's work.

It's an article of faith among many, myself included, that Thelonious Monk and Duke Ellington are good candidates for the two most important 20th Century American composers, but that awareness has been slower in coming than you might think. Sure, "Round Midnight" became an instant classic, and so did several of his other works, but Lacy dug deeper into the catalog, and found pieces for which recognition came much slower, if at all.

Secondhandsongs.com is a fascinating website which tracks the cover versions of songs. It doesn't list every song ever composed, though they keep adding to it, and there's no guarantee they're going to catch every cover, but they are a wonderful resource. Here's what they have on the tunes from this album:


Secondhandsongs doesn't have information on "Let's Call This."

Reflections was released on New Jazz in 1959.