In 1955-56 Miles Davis had one foot out the door of the Prestige mansion, and he made his farewell by hurrying through three marathon sessions, playing familiar ballads, getting his contractual obligations out of the way. You certainly couldn't say he was just going through the motions, because this was Miles, and he always played for real, but he was in and out of each tune, then in and out of the studio. And he produced a series of unforgettable masterpieces. 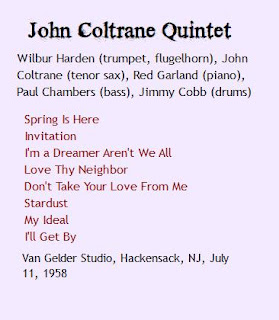 In 1957 and 1958, John Coltrane crossed the threshold to the Van Gelders' living room some 20 times, recording as leader or sideman, and he produced a lot of very great music, not all of which is remembered quite as vividly as those Miles albums. Maybe this is because their release dates are stretched out over such a long period. Maybe it's because a lot of the sessions were sliced and diced and released here and there in various formats. Or maybe it's a function of age (mine). I was just looking at someone's album-by-album discography of Miles Davis on rateyourmusic.com, and he doesn't think anything that Miles recorded on Prestige was any good. But then, he doesn't think Birth of the Cool holds up particularly well, either, so I'll stick with my opinions.

But if Standard Coltrane or Bahia or The Stardust Session don't stick in your mind the way Workin' or Relaxin' do, the reasons are for sure not to do with musical satisfaction. These sessions, for me, come under the heading of discovery rather than revisiting old friends, and the discoveries are rewarding. 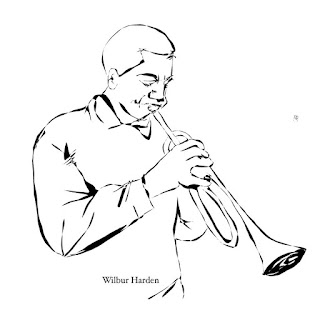 Jimmy Cobb is back to fill out the rhythm section along with Red Garland and Paul Chambers, and Coltrane has brought along Wilbur Harden on both trumpet and flugelhorn. Harden had come to New York from Detroit with Yusef Lateef, and he had quickly established a kinship with Coltrane. Before this July session for Prestige, he had recorded three sessions as leader of a quintet and sextet for Savoy, featuring Trane and, for the sextet sessions, Curtis Fuller. For his Savoy recordings, he stuck with the flugelhorn--he was one of the first musicians to introduce this European concert instrument into American jazz.

This is a lengthy session, if not quite as lengthy as the Contractual Marathon sessions, and like them, it leans heavily on standards, albeit an eclectic mix of standards. Four of them, in fact, found their way onto an LP entitled Standard Coltrane, released in 1962. They were:

"Spring is Here," a Rodgers and Hart ballad, originally written for a 1938 musical,  and a favorite of vocalists. Frank Sinatra had just recorded it for his 1958 album Only the Lonely. Interestingly, all the instrumental jazz versions of it up to this point seem to have emanated from the West Coast, most notably versions by Stan Getz/Bob Brookmeyer and Shelly Manne. There's no aid-back West Coast feel to Coltrane's version, and I'm not sure the lonely would take much solace in it either. Trane isn't really doing the sheets of sound in this session, but he comes close here, and Paul Chambers adds his own sheet of sound with some incredibly fleet-fingered bass plucking. Here, as everywhere on this session, Harden is well-matched to Coltrane on the ensemble work. He was a good choice. "I'll Get By" (melody by Fred E. Ahlert) goes back to the 1920s, but really reached public consciousness in 1944, with recordings by Harry James/Dick Haymes and the Ink Spots. It became a reliable standard for vocalists, but Coltrane was one of the few jazz instrumentalists to delve into it. Coleman Hawkins had recorded it earlier, which made it a serious tenor saxophone vehicle, and oddly enough, it was part of Sun Ra's repertoire. Coltrane treats the head as tenderly as if he were crooning it before he takes off into the stratosphere, and when he returns to it at the end, the tempo is more urgent, but the tenderness is still there. The urgency is well supplied by Jimmy Cobb. Jazz is about excitement, and a master drummer like Cobb never forgets that. Bebop took the beat away from the steady bass drum and gave it to the shimmering ride cymbal, and those who developed the bebop tradition could bring the beat from anywhere, and add so much more.

Henry Nemo wrote "Don't Take Your Love From Me" and the lyrics to Duke Ellington's "I Let a Song Go Out of My Heart," but he was chiefly known as a master of jive talk - perhaps the West Coast version of Harry "the Hipster" Gibson. Again, this was a tune that few jazz musicians had worked with--and again, one of the was Coleman Hawkins. But it drifted over into all sorts of genres, with recordings from country (Faron Young) to heavy metal (Ronnie James Dio).

"Invitation," by refugee German composer Bronislaw Kaper, who like several of his contemporaries fled Hitler and the European classical music scene to become a composer of Hollywood film scores, really did become a widely recorded jazz standard, as did Kaper's "On Green Dolphin Street." This isn't as obviously melodic as the other tunes, and Coltrane's solo work is thoughtful.

Those are the songs that made Standard Coltrane, and that's as good place as any to stop with the details. "Spring is Here" was also included on a compilation album called Miles Davis and John Coltrane Play Richard Rodgers.

Hoagy Carmichael's "Stardust" (great bowed bass solo by Chambers and, of course, great melody) and Richard Whiting's "My Ideal" are the best-known standards from the session. "Stardust" was the title tune on an album that included "Love thy Neighbor" (Mack Gordon, Harry Revel) and also featured music from Coltrane's final Prestige session, in December. It was released in 1963. "My Ideal," along with DaSylva, Brown and Henderson's "I'm a Dreamer, Aren't We All" were on the Bahia album (1965 release). "Stardust" and "Love Thy Neighbor" also came out on 45.