Red Garland's music is intelligent, melodic, clever, passionate, daring, eclectic, and rooted in the blues. His long time partners Paul Chambers and Art Taylor, work in perfect sync with him and add their exquisite musicianship. And if that's not enough to make any session they set themselves to a worthwhile listening experience, how about adding Ray Barretto to the mix?

The mambo had passed its peak as a form of interest to modern jazzers, although it was still a seller on the pop charts, with Perez Prado's "Patricia" going to Number One in 1958. Garland always drew from a multiplicity of sources, and with this ensemble, what better choice than to blend the mambo with the blues? And Barretto, equally adept at rhythms from north and south of the border, was a natural for  tune called "Blues in Mambo." 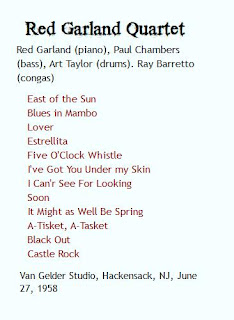 Except that it very nearly went unheard. This was something of a forgotten session. Nothing was released from it until 1963, and then only four tunes. The rest were to languish until 1977, when they were rediscovered and issued on a CD called Rediscovered Masters. And one, "I've Got You Under My Skin," is apparently still languishing unissued.

And the first four to see daylight were all recorded with just the trio, no Barretto. Some sort of contractual issue? It can't have been. Barretto was a regular with Prestige in this era. But be that as it may, such was the case.

The four songs on the 1963 release demonstrate Garland's usual eclectic taste. "I Can't See For Lookin'" was co-written by Nat "King" Cole's first wife, and was one of Cole's early vocal recordings, much bluesier than his later style. "Soon" is the Gershwins. "Blackout" was written originally for Erskine Hawkins by two of his bandsmen, Avery Parrish and Sammy Lowe. Lowe went on to have a distinguished career as an arranger, with credits ranging from Benny Goodman to Nina Simone to Sam Cooke to the Platters, and perhaps most famously, to James Brown with the arrangement for "It's a Man's Man's World." Parrish had his career cut short by an injury suffered in a bar fight, and he drifted away from music.

Maybe jazz and rhythm and blues had gotten a divorce by 1958, but just as with some ex-marrieds who can't always resist the old chemistry, they could still get together for a little hanky panky. Alan Freed loved jazz, and hired jazz stars for his stage show band, including Ellington stalwart Al Sears, who continued to play his own brand of fiery tenor sax, whatever the ensemble was called. His composition, "Castle Rock," was first recorded with a group he co-led with Ellingtonian Johnny Hodges, and released under Hodges' name, although he would later re-record and release it under his own. Initially, Sears got Ellingtonian Leroy Lovett and crooner Ted Travers to write a lyric, which was performed but never recorded, and was apparently unsatisfactory, because a month later he turned to Erv Drake and Jimmy Shirl, best known for the lyrics to "I Believe," a song not exactly associated with either jazz or rhythm and blues. Frank Sinatra and Harry James recorded that version. Garland's is witty and inventive, and you could dance to it. Garland's piano carries most of the freight 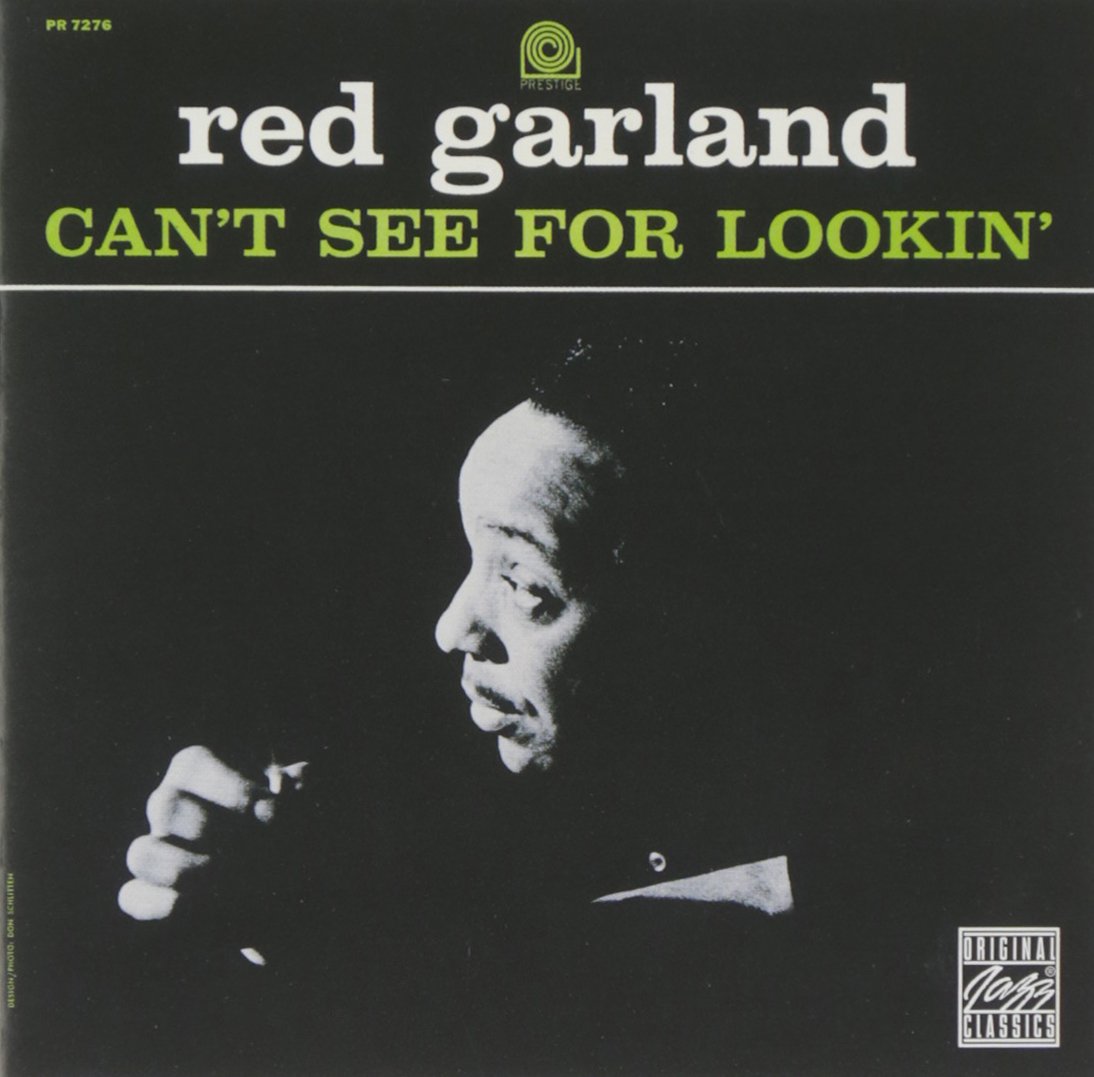 in a ten-minute improvisation, but there's a Paul Chambers solo that's much admired by bass students.

Listening to a lot of Red Garland -- this 12-tune session, and the others that the prolific pianist recorded for Prestige during this period -- one really gets a chance to slow down and listen to the full extent of his talent. This would undoubtedly be true of listening to any jazz great, and I'm not just talking about the giants like Miles or Bird. But it's Garland I'm listening to right now, and marveling how a having a distinctive style doesn't mean repeating oneself or falling into a rut. In every one of these cuts, it's always Garland, but it's always a fresh and new experience, always surprises, always little unexpected thrills, always a cumulative satisfaction.

The quartet cuts with Barretto--you can't say they're better, because the trio cuts are as good as it gets--but they're superb in a different way, with a different ambience. There are standards and originals, even novelty numbers like "Five O'clock Whistle." And, as always with Garland, the unexpected, "Estrellita" is a lovely ballad written in 1912 by Manuel Ponce, a Mexican composer credited with rediscovering Mexican folk music as an inspiration for classically composed music.

Rediscovered Masters didn't come out till 1977, first as a double LP and then, with more cuts from later sessions, as a 2-CD set. It was a cause for rejoicing then,