Ken McIntyre's early career with Prestige is an interesting tangle. This is his debut album as far as the public is concerned; it was the first one to be released, although it was recorded after his May 31 session featuring musicians from Boston with whom he had been playing regularly.

Why release this one first? Prestige's marketing department, which was essentially the same as its creative department--i.e., Bob Weinstock--must have felt that this was a stronger way to introduce a new artist creating a new and edgy kind of music. 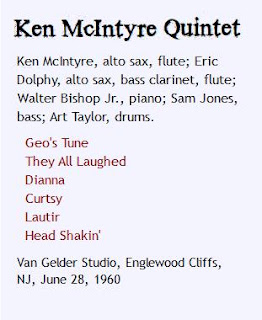 New Jazz was becoming, more or less, Prestige's label for the edgier stuff--the new jazz, as it were. And it was happening. Ornette Coleman could no longer be ignored. Coltrane had opened a new door with Giant Steps. Eric Dolphy was on the brink of becoming Prestige's breakout star of the new jazz, and his presence on this album gives it a significance that perhaps Weinstock was afraid would not be so apparent with the other session.

Prestige is definitely telling us something with the album's title. In the wake of Ornette's Something Else!!!!, Tomorrow Is the Question!, The Shape of Jazz to Come and Change of the Century, McIntyre's debut is titled Looking Ahead.

McIntyre himself might not have agreed with the decision. He saw his first session, with the guys he had developed his music with, as a truer representation of his music.  And maybe he was right, but maybe he was wrong. I don't want to judge either way. But Weinstock's classic approach--Let's put a bunch of cool cats together and see what develops--produced some exciting music, and it does so here.

All but one of the selections are McIntyre originals. The exception is the old Gershwin chestnut, "They All Laughed," and it's interesting to see how these modernists take it. They play the head remarkably straight, and they never really lose it. They go far enough out in their improvisations to be satisfying--and because they're that good, to be deeply satisfying--but they always have that ha-ha-ha, who's got the last laugh now? feeling. Who says the avant-garde can't have a sense of humor? Walter Bishop's solo brings them back into home territory, and they finish up with Gershwin again. It's hard to top Gershwin, and of course McIntyre doesn't try. It's interesting to try and imagine what his original compositions, and the improvisatory flights of the soloists, but it's ultimately a mug's game. Which of the two sessions is better? It's close to impossible not to lean toward this one, but that may be because Eric Dolphy achieved such heights in his short career that looking back, we want to listen closely to everything he did. How difficult and experimental did this music sound to contemporary audiences? We can't hear it with their ears. Today it sounds mainstream. I can remember the excitement of being young and having discovered jazz not all that long ago, and living in New York for the first time, and going down to the Five Spot to hear Ornette Coleman and Don Cherry, but I can't recover those ears. It's part of nostalgia for my youth now. I wouldn't go so far as to say that The Shape of Jazz to Come will ever exactly be comfort music, but it is now part of a tradition. And listening to Ken McIntyre and Eric Dolphy today, they sound like a couple of cats playing very good music in that tradition. I had never heard this album before, and I'm glad I'm getting the chance to hear it now. It's good jazz, real jazz. And I like his originals, especially "Lautir" and "Head Shakin'."

Looking Ahead and Stone Blues were the only two albums McIntyre would make for Prestige as leader, although he would appear on one other Prestige session backing up a vocalist.