There are some songs--pop songs, art songs, theater songs--that don't necessarily benefit from a jazz treatment, and I would say "On the Street Where You Live" would be one of them. But nobody much agrees with me, and everyone wants to take a crack at a good song, so many jazz singers have covered this classic from My Fair Lady, even some soul singers like Ben E. King (I liked his version--maybe the right singer can make anything sound soulful). but Etta Jones took a shot at on this session, and acquits herself quite well. It does sound a little forced, or it would, except for one thing: Frank Wess. 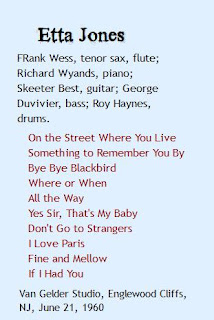 I'll obviously be devoting a lot of space in this entry to the wonderful Etta Jones in her breakthrough album, so I'll start off with Wess and get him out of the way. Every jazz singer who ever lived should have been breaking down his door to get him to work with them, and a lot of them did: his bio lists Mel Tormé, Ernestine Anderson, Johnny Hartman, Helen Merrill, Dakota Staton. His fills enhance and inspire, and his solos...well, you can imagine.

This is Jones' breakthrough album at age 32, which is not exactly doddering, but it did take her the better part of two decades to become an overnight success. She began her professional career as a 15-year-old with Buddy Johnson. She had performed at amateur night at the Apollo -- "I did not win," she told interviewer Monk Rowe in 1998,"in fact, they almost booed me off the stage at first." But she finished her song, and afterwards the male vocalist with Buddy Johnson's band approached her and told her Buddy was looking for a girl singer--his sister Ella was off having a baby. She was terrified, sure she wasn't ready, but she went for the audition, which was right there, on the spot, backstage. Another singer was there to audition too, but she knew the lyrics to Johnson's songs, and the other woman did not, so she got the gig. Two days later she was on the road.

Ella came back, but Etta wasn't turning around. At 16, in 1944, she made her first recordings, with Barney Bigard and Georgie Auld--Leonard Feather on piano, Chuck Wayne guitar, Stan Levey drums. She was a blues singer back then, and could stand comparison with the best of them, but the era of classic blues was over, and that was the way producer Feather chose to present her. Feather, who wrote the songs as neo-classic blues, was a traditionalist who did not recognize the artistic potential of the new field of rhythm and blues, which is sort of too bad. Jones might have had more commercial success that way. Nevertheless, the early recordings are terrific. She also recorded "I Sold My Heart to the Junkman," with a band headed by J. C. Heard, as a haunting blues ballad. Gene Ammons recorded an instrumental version for Prestige in 1961, and it would become a huge R&B hit for Patti LaBelle and the Bluebells in 1962.

The singer she reminds me of most is Dinah Washington, and Washington did cover all bases--blues, pop, rhythm and blues, jazz. In fact, she covered three of the four Leonard Feather tunes from Jones' first session, and did well with them.

After the 1940s, Jones worked--she spent a few years with Earl Hines--but no more recording, until she re-emerged as a jazz singer, singing standards, on an album in 1957 for Cincinnati-based King Records. King was heavily into rhythm and blues and country, and did not really get behind its occasional jazz releases.

That all changed with this Prestige release. Suddenly, she was a star--an overnight success. The bestselling single from the album, "Don't Go to Strangers." went gold, something not too common for records from small jazz labels. She would record several more albums for Prestige, then for other labels with various musical accompaniments, then finally make a very successful partnership with saxophonist Houston Person, with whom she would tour and record for more than thirty years. But this would remain her best-known recording, and her greatest commercial success.

Why did it take so long for her to break through? Jones' own explanation for her late success: she wasn't ready for it earlier. Citing Billie Holiday, Thelma Carpenter and Dinah Washington as early influence, she told Billy Taylor in an interview that:


I took about twenty years to really not be afraid of what I was doing, and to know what I wanted to do and where I wanted to go. 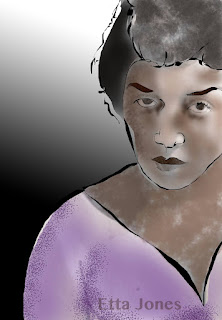 If that was the case, the results were worth waiting for. This album was deservedly praised, and Jones, working with a premier group of musicians, proves herself ready to join the top echelon of jazz singers. I can't find a producer credit for this session, but it was most likely Esmond Edwards. I've mentioned  the brilliance of Frank Wess, who takes the lion's share of the solos, but Richard Wyands' contribution is also stellar, and so is a newcomer to Prestige, the veteran guitarist Skeeter Best.

Best's career goes back to 1935. He was with Earl Hines for a few years before joining the Navy in 1942, so his stay with Hines did not overlap Jones's. But he had kept busy during three decades before being tapped for this session, evolving with the times. He had played with modernists like Sonny Stitt and Sir Charles Thompson, and he'd done the guitar part on Little Willie John's R&B hit "Fever."

Along with them are George Duvivier and Roy Haynes, for whom "always reliable" doesn't begin to do them justice.

She tackles an interesting mix of songs here. She has always said, in various interviews, that what interests her most in a song is a good lyric, and she finds them in a variety of sources, from the hot-cha-cha glitz of the Roaring Twenties to a contemporary hit, and even a new song.

The Twenties are covered by "Yes Sir, That's My Baby" and "Bye, Bye Blackbird," both songs that have had many lives. "Yes Sir" has been covered by country artists (Roy Acuff) and doowoppers (the Clovers and--one of my favorite versions, the Sensations, with the relatively unusual doowop feature

of a female lead), less often by modern jazz ensembles--this may have been the first such version, and they make it work, with some inspired playing by Frank Wess. "Blackbird" has always been more conducive to a modern approach, especially after Miles Davis blew it wide open on his first Columbia album. Peggy Lee, Julie London and Carmen McRae had all contributed versions of it before Jones picked it up, but she takes a back seat to no one, not even Frank Wess, with improvisational stylings that prove you can still find surprises in an old chestnut.

She gives us the classics--Cole Porter, Rodgers and Hart, Howard Dietz and Arthur Schwartz. With "Fine and Mellow," she starts out by channeling her idol, Billie Holiday, but then moves into territory that is pure Jones (she gets some great Wyands piano on this one, and fine solo by Best). She sings a current hit, Frank Sinatra's Top Ten hit "All the Way," and introduces a new one, "Don't Go to Strangers," that would become her biggest hit.

"Don't Go to Strangers" was released twice on 45 RPM, once with "If I Had You" on the flip side, the other time with "Canadian Sunset." "All the Way" was the B side to a song from a later session, "Till There Was You." Don't Go to Strangers was also the title of the album.

of this session, but that was enough to put them in different eras--that's how fast jazz evolved). Ammons may not have been the first tenor man to record with an organ, but he certainly knew how to do it, and Wess's flute fits in perfectly too. They draw on a variety of composers (including originals by Ammons and Wess) and play some first rate jazz, wild and soft, pensive and gutsy. This session was split over two discs, both released later, when Ammons was serving a second, and longer, prison term. Velvet Soul was the title track of a 1964 release that also featured "In Sid's Thing," and the other tunes came out on Angel Eyes in 1965. "Angel Eyes" as a two-parter saw two different 45 RPM releases, some years apart, and "Velvet Soul" came out on 45 along with "A Stranger in Town" from a later session.