Bob Weinstock has tried, not always successfully, to give a showcase to talented but unheralded blues artists (Al Smith), and he's jumpstarted careers of performers who had slipped into obscurity (Lonnie Johnson). With Memphis Slim, it's a little different, Slim, who started to find success when he moved to Chicago in the late1930s, had sustained a recording career right through the 1950s, as a jump blues player and bandleader, and then reinvented himself as a folk blues artist, having recorded several successful albums for Folkways Records, including one with Pete Seeger. 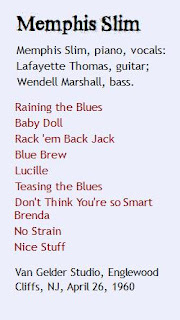 Don't forget, in 1960 the blues revival had not yet happened, and there actually was not a huge demand for a label named Bluesville. Columbia's release of Robert Johnson: King of the Delta Blues Singers would be released in 1961, and would start a trickle of interest that would grow exponentially as the British Invasion rockers embraced American blues and brought them back home.

The late 1950s were the fields of honor for a complex series of culture wars that made the War on Christmas look like a beach party with Frankie and Annette. In literature, the battle was between tbe academics and the beats--the raw and the cooked, in Robert Lowell's phrase. And in music, the center of all the battles was rock and roll. If you were over 35, rock and roll was an offense to Western civilization, especially if you were over 35 and white and a believer in racial purity. If you were a jazz fan, rock and roll wasn't subtle or sophisticated enough. If you were an ethnic folkie, it wasn't pure enough.

So where did that leave the blues?

It seems hard to believe, as central as the blues are now perceived in the American cultural wheel, but in this era the blues were lumped into the philistine camp. Muddy Waters--philistine then, revered icon now--sang about how the blues had a baby and they called it rock and roll, but back then the cultural guardians stood at the door, banishing both mama and baby as orphans of the storm. 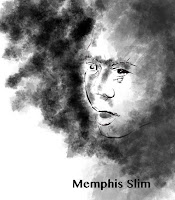 The old guard basically rejected the blues because they weren't white enough. Their idea of the blues was Frank Sinatra singing about how, along with cigarettes lit one after another, you could get your first lesson in learning the blues. Or Dinah Shore singing about how the Southland gave birth to the blues. Nat "King" Cole was white enough until he crossed the unwritten lines. His 15-minute network TV show was canceled when no sponsor would touch it. Sammy Davis Jr. celebrated the new racial tolerance and the death of the old Stepin Fetchit stereotypes by essentially playing Stepin Fetchit to Frank

The jazz snobs rejected the blues because it wasn't sophisticated enough, but certainly not on racial grounds. Oh, no? Are we so sure about that? Modern jazz had been created, developed, brought to its peak of artistry by black musicians. But there were whites involved in that development, too, and rhythm and blues was so black. If there were any white artists playing rhythm and blues in this era, I can't name them. When Esquire magazine included black critics in its annual jazz poll and suddenly more black artists were winning, Stan Kenton became the first white racist to yell "reverse discrimination." There was no Stan Kenton in rhythm and blues--except Johnny Otis, and he identified as black. There was no Stan Getz in rhythm and blues.

Actually, there was. Elvis Presley was the Stan Getz of rhythm and blues. But no one was going to accept that idea then, and I'm willing to bet that almost mo one who reads this will accept it now. This is not meant to be a knock on Getz. We all know that he and Desmond and Evans are great jazz musicians by anyone's standards. As were Teddy Kotick and Stan Levey and George Wallington and many others. But if there hadn't been white faces on at least some of the bandstands, the audience for modern jazz would have been a lot smaller. And if the Down Beat readership of the 1940s and early 1950s had been blacker, wouldn't Roy Milton and Paul Gayten and Joe Liggins and Big Jay McNeely have been showing up on some of those polls?

Clint Eastwood, in Bird, echoes this. Eastwood is a true jazz lover and a great champion of jazz, and I am perhaps the only person in the jazz community who actually liked Bird, for reasons irrelevant to this discussion. But Eastwood is a bit of an old school jazz snob too, and he does have Parker react incredulously and scornfully when he hears an old rival playing at the Apollo: "What is he doing playing rhythm and blues?" I have to believe that was Bird, and not Bird.

Folkies made the divide easier. If it wasn't played on acoustic instruments, it wasn't folk, and by the 1940s most blues musicians had gone electric. The exceptions there were a small group, mostly centered around New York and mostly recorded on Folkways, including Sonny Terry and Brownie McGhee, Big Bill Broonzy, Josh White, the Reverend Gary Davis, and Lead Belly.

Lead Belly was the first, and one of Folkways' biggest stars, if such a term can be applied to a populist egalitarian folkie business like Folkways. Lead Belly is an unusual figure, because he's such an important figure in the history of the blues, and yet he's not really a part of the history of the blues at all. The blues as we know them, which means recorded blues, began in 1920 with Mamie Smith's "Crazy Blues," which sparked the blues craze that lasted through the 1920s, until the depression meant that record companies had to cut back on their output, and the black performers got cut back first.

Lead Belly spent the 1920s in prison, so the decade in which his fellow songsters reinvented themselves as bluesmen passed him by. He was discovered by the folklorists John and Alan Lomax, who were traveling the South looking for authentic Negro folk singers. Since the blues had achieved such a high level of popularity, the Lomaxes regarded it with the disdain an aficionado of classic rhythm and blues would feel for disco. Lead Belly, who knew a thousand songs (and could make up a thousand more) represented the music of an earlier generation--the pure folk music, in the minds of the Lomaxes.

When he got to New York, they found that he had no audience in the black community, He bombed at the Apollo. He represented a time and a culture that contemporary African Americans wanted to forget. So his audience was white leftists--the Folkways crowd. And there was a problem singing the blues to this crowd, because the blues is a music of hard-headed realism. This is the way life is, and don't expect it to be anything else. This was at odds with the philosophy of the white leftists, which was give us bread and give us roses--take it easy, but take it. So Lead Belly did what any good entertainer who wants to eat should do, and gave the people what they wanted. He started writing an singing songs about being from the home of the brave and the land of the free, and not wanting to be mistreated by no bourgeoisie. Others saw that market and decided to get in on it. Big Bill Broonzy, a jazz guitarist from Chicago, reinvented himself as an ethnic folk bluesman (he had the roots credentials for it) and sang a plea to get together and break up the old Jim Crow.

The explosion of popularity of electric blues, and the invention of folk rock,was to change the face of folk music in the mid-1960s, and all but the purest of the purists had to revise their definitions. Muddy Waters gave the nod, or perhaps the finger, to the folk establishment when his 1966 LP was called The Real Folk Blues.

Which brings us to Memphis Slim, who managed not only to make a living through all those years, but to defy categorization. He was a piano player, which put him in a different category from the guitar and harmonica players who congregated in Washington Square Park on Sundays, and who were most identified with the folkie sound, but he recorded for Folkways, as a solo act and with Willie Dixon, the achitect of the Chess Records rhythm and blues sound of Chicago. He put together a jump blues band callled Memphis Slim and the House Rockers which recorded for various R&B labels: He was recording for VeeJay and Folkways at the same time. And after 1962, when he moved full time to Paris, he became a staple of European jazz festivals, including the one at Montreux in Switzerland. His song, "Nobody Loves Me," which a reworking of an earlier blues,"Every Day  I Have The Blues," with the original title given back to it, became a hit for Count Basie and Joe Williams, then Lambert, Hendricks and Ross, and is now considered a jazz standard.

For his first Prestige session, he formed a trio made up of electric guitarist Lafayette Thomas, whose mostly rhythm and blues background included a steady gig for several years with Jimmy McCracklin, and Prestige regular Wendell Marshall. All the songs are Slim originals, with songwriting credits given to Peter Chatman, which was not Slim's real name either, but his father's. He was actually John Len Chatman, but he used "Peter" for all his songwriting and publishing. Co-writer credit goes to Marshall on "Teasin' the Blues," which has some very nice piano-bass duet parts, and to Thomas on "Nice Stuff," which has a walking guitar solo reminiscent of Jimmy McCracklin.

This session and a later one for Prestige were both distributed across two albums, Just Blues and No Strain. Either would be an excellent introduction to Memphis Slim both as piano player and singer, or to anyone's blues library. Both were released on Bluesville.  "Darling I Love You" is marked in the session notes as "Rejected," but Slim must have liked the number, because he did it again in his November session, where Thomas' guitar was replaced by a harmonica, and that one became the first cut on No Strain.
Posted by Tad Richards at 2:04 PM