For his third Prestige album as leader, Johnny "Hammond" Smith stays with his regular bassist, George Tucker, and reunites with Oliver Nelson, on whose earlier date he contributed as a sideman. Art Taylor is back in town for a little Prestige action (he'd played the Lem Winchester session a few days previously), so he joins the session, as does Ray Barretto.

Nelson is content to play a supporting role here, not contributing any original compositions,  which is 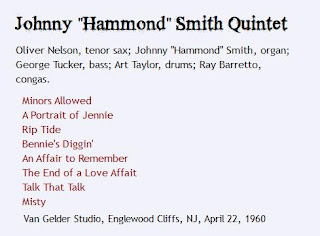 a little unusual, considering his reputation as a composer. He appears on three tracks--"Minors Allowed," "Rip Tide" and "Bennie's Diggin'." He plays a supporting role on "Minors Allowed," but he really steps out front with Walter Donaldson's "Rip Tide," an uptempo number with the energy and drive of an earlier era and the virtuoso dexterity of bebop. It really becomes his number, and Smith rides along with him, on a melody that sounds as though it were written for a soul jazz interpretation. Nelson leads off "Bennie's Diggin'." playing the head, but it becomes much more of a two-man show.

As for the works of other composers, "A Portrait of Jennie" was the title song for a 1940s movie, by an unlikely source for a sentimental movie theme composer. J. Russel Robinson began his career as a teenage ragtime composer in the first decade of the last century. He co-wrote songs with W. C. Handy, composed blues for the classic blues singers of the 1920s like Lucille Hegamin, and wrote the novelty classic "Who Is That Funny Reefer Man?" for Cab Calloway in the 1930s. He had some very big hits, like "Margie," and a lot of good songs. "Portrait of Jennie" had been recorded by Clifford Brown in 1955, but it didn't really become a jazz standard until later in the 1960s, after Smith had laid down his version. Smith keeps it short and to the point, at less than two and a half minutes it might have been a good candidate for a 45 RPM release, but such was not to be the case.

The single from this session was "The End of a Love Affair," by Edward Redding, about whom ad executive who just got lucky with one tune; his New York Times obituary lists his occupation as composer and lyricist, and they even credit him with a nickname ("Bud"), so he must have been known to someone, and they give a list of mid-level lounge singers (Julie Wilson, Jane Morgan) that he wrote for, but no other songs. Still, "End of a Love Affair" must have made him a wealthy man all by itself. It's been recorded by nearly every pop singer, lounge singer, jazz singer and cabaret singer, as well as by a host of jazz notables, not that being recorded by jazz notables ever made anyone wealthy. It's a good song, but more than that, it has a message that at least someone on any night in any cabaret is going to want to hear. Smith's version features a catchy rhythm set by Ray Barretto, and if I had been Bob Weinstock, choosing between this and "Portrait of Jennie" for my jukebox release, I too would have gone for "End of a Love Affair." virtually nothing is known except that he wrote "The End of a Love Affair," music and lyrics both. He doesn't seem to have been a janitor or

The final standard is Erroll Garner's "Misty,"  and here feels no need to stay within the bounds of a melody everyone knows so well, so he opens up nicely on the improvisation. "An Affair to Remember" is not the treacly movie theme, but a Smith original, as is "Talk That Talk," a title that sends a message of nothing but soul jazz, and that's what Smith delivers. That it became the title track of the album shows that Weinstock knows the direction Snith is headed in.

Esmond Edwards produced. The release was on New Jazz.