Two weeks after Bill Jennings, Jack McDuff, Wendell Marshall and Alvin Johnson had gone to Englewood Cliffs to record as the Bill Jennings Quartet, they were back again, this time under McDuff's name. He was the third of the trio that had been signed on to Prestige as Willis "Gator Tail" Jackson's group to record as leader, though he probably ended up as the most commercially successful of the three. 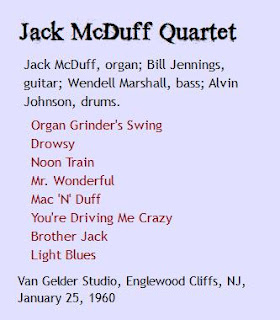 So, about the music. The set begins with "Organ Grinder's Swing," written by Will Hudson (best known for "Moonglow"), a swing era tune from the 1930s that originally celebrated that figure of Depression-era mythology, the organ grinder and his trained monkey. In the soul jazz era, it got picked up by virtually everyone who played that more sophisticated type of organ, the Hammond B3. Shirley Scott was the first to take it on, on an album with Joe Newman, and Jimmy Smith would record it a few years later with Kenny Burrell. But McDuff and Jennings were the first to give it the guitar-organ treatment, and if there's ever a number that demonstrates how perfectly these two long-time partners work together, it's this. There are also lyrics written by Irving Mills and Mitchell Parish, probably best forgotten these days, because they include the verse "Eeny meeny miney mo, Catch a monkey by the toe."

"Drowsy" is the first Brother Jack composition on the album, and it is something different, starting with with notes sustained as only an electric organ can, to the point of eeriness,  and if you're looking for eerie, how about the next sound you here, which is Bill Jennings bending one blue note at a time, with some fairly impressive sustaining himself, and that's basically what happens throughout. If a slow tempo is enough to make something a ballad, then this is a ballad. Except it's not. Is it jazz? Well, sure it is. It's on a jazz album, and it's being played by two jazz masters, so what else do you want? 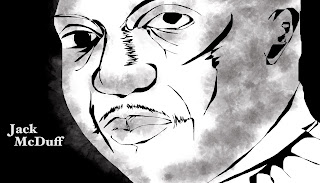 "Noon Train" is another original, uptempo, riff-based, blues-drenched, with some serious work by Wendell Marshall and especially Alvin Johnson, some flights of creativity from McDuff and a guitar solo that -- not for the first or last time -- makes you stop and ask yourself why Jennings isn't on everyone's list of greatest jazz guitarists. And he's not. Not even on Ranker's list, which has 131 guitarists on it (well, he is now). Which shows you that people can be wrong. Or perhaps that I'm wrong--but that's not possible. This is one hell of a guitarist. Am I right, Larry (the Fluff) Audette?

"Mack 'N' Duff" and "Brother Jack" are two that he named after himself, and all of these together lead one to the inescapable conclusion that if McDuff wasn't one of the great jazz composers, he surely was the greatest composer of original music for Jack McDuff, and it is every bit of that: original, and designed to show his considerable range, and with great parts for his pal Bill Jennings. Jennings is co-composer on the final original, "Light Blues," and it's a nice showcase for him, a lazy swinging blues. 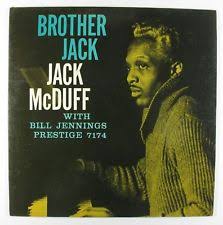 "Mr. Wonderful" certainly had its heyday as a jazz piece in the late 1950s, especially with organists (Shirley Scott and Johnny "Hammond" Smith took it on too), and not much after that, which shows the clout that Sammy Davis, Jr., had in those days, but it's also not a bad tune, and it's hard to fault this version. "You're Driving Me Crazy" is a certifiable standard. Written by the prolific Walter Donaldson, it's never gone very long without provoking a new rendition, either jazz or pop (most recently Van Morrison and Joey DiFrancesco). McDuff and Jennings take it at a relaxed tempo, and do some cool things with it.

"Organ Grinder Swing" was the single, b/w "Brother Jack." Brother Jack was also the name of the album, although it would be a while before the brother would add "Brother" to his name full time. I had a tough time choosing a "Listen to One" for this session. So many different sounds competed for my attention. Listening to all would not be a bad idea at all.
Posted by Tad Richards at 5:50 PM