Bob Weinstock continues his streak here: finding wonderful blues singers, putting them together with first rate musicians, and not really achieving the kind of success one would hope for.

Mildred Anderson had recorded a couple of sides in the 1940s and a couple more in the 1950s. This session, and a followup for Prestige, are generally considered to be her best work, but they didn't bring her much fame. She faded into obscurity--in fact, into oblivion. There appears not even to be a record of her death. Or her birth, for that matter. 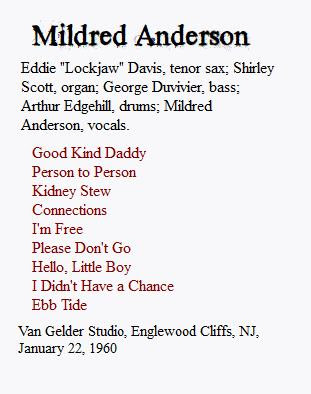 Anderson had worked with first rate musicians before. She'd had a minor hit with Albert Ammons ("Doin' the Boogie Woogie"), and had recorded with Hot Lips Page and Bill Doggett. But "Doin' the Boogie Woogie" really wasn't a very good song, although it had a nice solo by Ammons. And on the Prestige session, she gets the label's stars, plus Esmond Edwards' producing talents, and, of course, Rudy Van Gelder engineering the session.

She has a full day of studio time. And she has an interesting collection of songs.

Here again, we've moved into a new era. Edwards and Anderson, or whoever picked out the songs for this session, are not looking back at the composers who compiled the Great American Songbook, now closed, gift-wrapped, and sent to Ella Fitzgerald. Those songs aren't necessarily appropriate for a contemporary blues singer, anyway. This is a different and a motley bunch, but professionals with some interesting hits to their resumes. 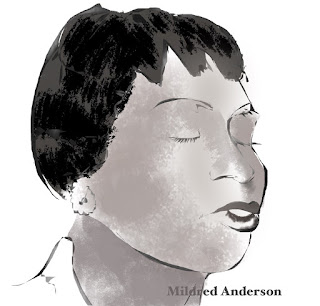 "I'm Gettin' 'Long Alright" and "Connections" were written by Charles Singleton (who also wrote "I'm Free" and Bobby Sharp. Sharp, who grew up in a two-room Harlem flat where his parents entertained the likes of Roy Wilkins, Thurgood Marshall, Langston Hughes and Duke Ellington, wrote "Unchain My Heart." Singleton wrote "Strangers in the Night."

Rhythm and blues great Chuck Willis wrote "Don't Deceive Me (Please Don't Go)." Anderson herself wrote the two blues numbers, "Hello Little Boy" and "Cool Kind of Poppa," and they're both solid songs, well suited to her style. Another blues legend, Eddie "Cleanhead" Vinson, wrote "Kidney Stew Blues," along with Leona Blackman, who wrote a number of R&B tunes for artists like Big Maybelle, but "Kidney Stew," as originally performed by Vinson, was her biggest hit.

"Person to Person," which became the title song of the album, was written by Wally Gold, who had a bunch of hits, including  "It's Now or Never" and "Good Luck Charm" for Elvis Presley, and a song he was called in on to finish up for a part time songwriter, who had been inspired by a tantrum thrown by his teenage daughter, when informed she had to invite her grandparents to her Sweet Sixteen. When he tried to calm her down, she retorted "It's my party, and I'll cry if I want to."

Mildred Anderson is a terrific singer who deserved more recognition than she got. The musicians backing her up, Scott and Davis and their regular rhythm section, George Duvivier and Arthur Edgehill, are amazing. I commented before, regarding their session with Al Smith, that "Shirley Scott's understated but impassioned organ work, on every cut, really pulls the album together. It makes you wish she'd done a lot more work with singers." That's as true, and more, on this session, but if I singled out Scott that time, I might not be able to do it this time. She and Davis are equally impressive. They do wonderful work backing up the singer, accenting her and bringing out the best in her, and they move from that into solos that take on their own importance, yet never stop being part of the song. I can't say more than that, because every time I try to single out one of them, and one cut off the album, so many others jump out and demand equal time.

Maybe Davis and Scott were born out of their time. In the 1930s, the bandleaders were the stars, and the singers were just part of the show. By the 1950s, that only worked for Johnny Otis. But if Davis and Scott could have added a vocalist and put together a package like Tommy Dorsey or Glenn Miller...

"Person to Person," b/w "Connections," is the 45 RPM single. "Connections" was not included on the album. Nor was "Ebb Tide," and neither of them are listed on the CD reissue, either, although you can find "Connections" on YouTube, which is all to the good. It's a nice raunchy song. Unfortunately, the single didn't make much of a dent. Maybe if they could have gotten a different Wally Gold song, like It's My Party." Well, maybe not.
Posted by Tad Richards at 7:56 AM