In spite of being a prolifically recorded guitarist over a range of styles, and the musician B. B. King has called one of his biggest influences, Bill Jennings remains remarkably obscure. He played with Louis Armstrong and Louis Jordan, King Curtis and Ella Fitzgerald. He played guitar on Little Willie John's "Fever."  But he's not much remembered, and all that remains in print are the early sides for the King and Gotham labels, available as an import--none of the Prestige recordings. He had come to Prestige with Willis Jackson and Jack McDuff, and the three of them recorded in various combinations. This and the earlier Enough Said were issued under his leadership, although Wikipedia's discography for Jennings lists him as a sideman to Jack McDuff for this session. 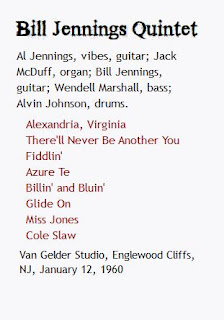 The date includes a number of tunes that Jennings had previously recorded, and one that Prestige must have hoped for some radio and jukebox action from. "Cole Slaw" was a Jesse Stone composition that had originated under a different title. It had been recorded in rhythm and blues and swing versions by "Doc" Wheeler and Jimmy Dorsey in 1942 as "Sorghum Switch." When it was resurrected in 1949 by Frank "Floorshow" Culley as "Cole Slaw/Sorghum Switch," it became a hit, and Louis Jordan covered it as simply "Cole Slaw." But you weren't going to get much nostalgia value out of a 1949 Atlantic recording. Their early rhythm and blues instrumentals had been eclipsed by their mid-1950s hitmakers like Ray Charles and LaVern Baker, and the early stuff wouldn't even be rereleased on LP till years later, with the big Atlantic box sets.

And if this had been planned as a jukebox hit, no one seems to have told the Jennings brothers and Jack McDuff, because their recording runs more than eight minutes, and probably had to be cut down considerably for the 45 RPM release. I'm guessing they cut out the intro and first solo by Al Jennings on vibes, although Al comes back much stronger later, and there's some powerful three-way interplay between Al, Bill, and McDuff. It's a fine recording, and so is the straight-ahead blues that made the flip side of the 45, "Billin' and Bluin'." Also featured on the set is a song variously called "Miss Jones" and "Hey, Mrs. Jones," which is not to be confused with "Have You Met Miss Jones" or "Me and Mrs. Jones." "Cole Slaw"/"Billin' and Bluin'" was the only single release; the album was Glide On.