Phil Woods is back for a Prestige session after a couple of years absence, and this will be his last session for Prestige. In fact, for someone who is remembered as one of the most prolific jazz recording artists of all time, he did very little recording for most of the 1960s. So it’s a shame that this session was put on the shelf, and never actually released until the late 1960s, by which time he was back on the recording scene again,with a pace that never slackened. 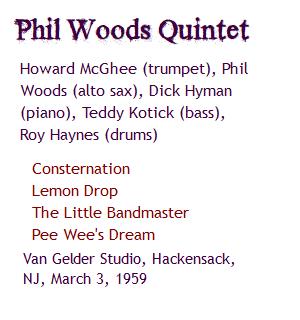 Dick Hyman, who is recognized as one of the masters of jazz piano (quite literally: he was named an NEA Jazz Master in 2017),and who rivals Phil Woods for a prolific catalog, did very little recording in the widely preferred small group setting. He could play anything, and did. He played tribute albums in the style of everyone from Jelly Roll Morton to Thelonious Monk. He worked extensively in radio and television, including stints as musical director for Arthur Godfrey and Sing Along With Mitch, two gigs you might not want on your resume if you were trying to show how hip you were, but Hyman didn’t care much about that. However, another one of his TV gigs was as the piano player on Charlie Parker’s only television appearance. In 1955, he recorded “Moritat: Theme from the Threepenny Opera,” and his mournful instrumental version sold a million copies, making it the most successful recorded version of the tune until Bobby Darin swung it, with Doc Severinsen on trumpet, as “Mack the Knife.”

Hyman had done another small group recording for Prestige in 1956, backing vocalist Barbara Lea, under the pseudonym Richard Lowman (he was under contract to MGM at the time).

Howard McGhee is one of the premiere bebop trumpeters. When Charlie Parker made his ill-fated West Coast tour in 1945, McGhee was one of the few artists who understood him and were able to play with him.

Because of McGhees 1946-47 sessions with Parker, I’d always thought of him as a West Coast musician, but in fact he spent very little time on the West Coast. Addiction problems meant that he didn’t work or record much in the 1959s, but his career would have a renaissance in the 1960s.

With McGhee, Teddy Kotick and Roy Haynes, who can play some bebop, and Dick Hyman, who can play anything, there’s some terrific music here, none of which I can share with you on Listen to One, because no one has put it up on YouTube.  This may have been Kotick’s last New York recording session, with the exception of one he did with Helen Merrill in the mid-1960s. Here’s a poem I wrote about him (recently published in the online journal Verse-Virtual):

I deliver the mail

bass in the back

play for the door

back to the route where

who sniff at my ankles

would know what it meant

if someone told them 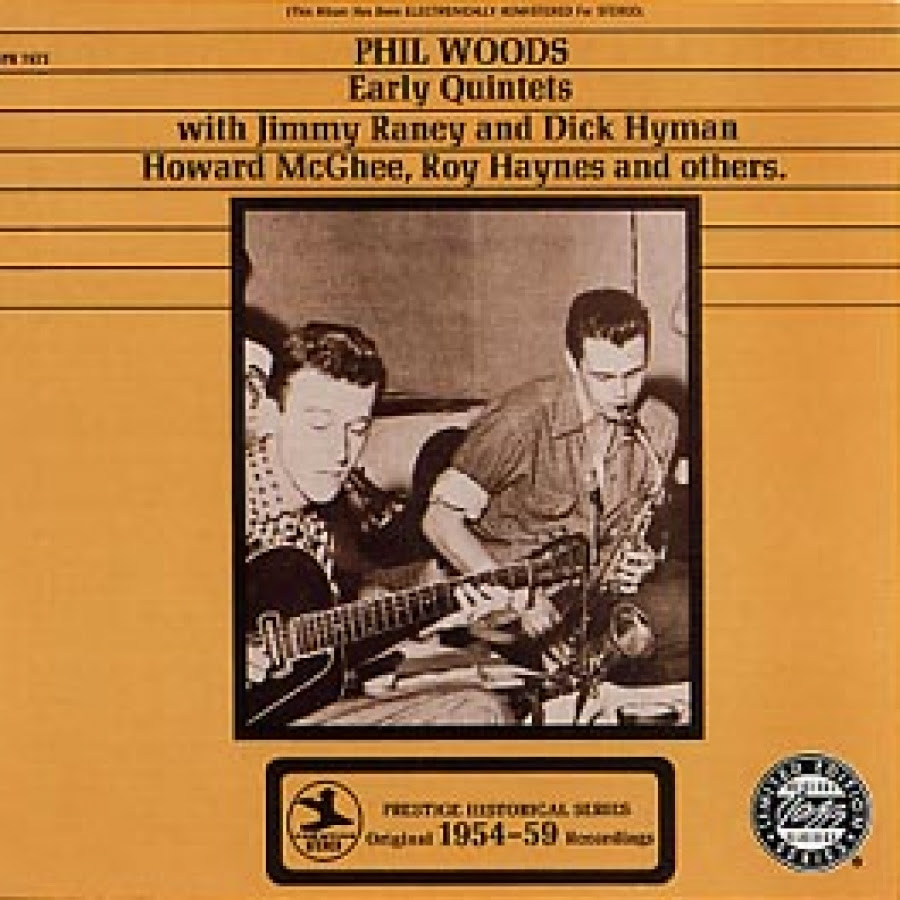 It’s a short session: four songs, the kind you used to see when they were still making 78s. When it was finally released, it made up side of an LP. The other side was a session with Jimmy Ramey--actually a Jimmy Ramey ssesion--from 1954. it had been released on New Jazz and on the odd formats they
were experimenting with back then: 16 2/3, 45 RPM EPs.

This album was released as Early Quintets, and the cover art suggests even earlier quintets than they actually are: it looks like something from the early days of LPs, back in 1952. Makes you wonder about the marketing: did Weinstock expect people to see it in the bins and say, "Wow! Phil Woods from back in the day! Wonder how I missed this?"

Tad
Richards will strike a nerve with all of us who were privileged to have
lived thru the beginnings of bebop, and with those who have since
fallen under the spell of this American phenomenon…a one-of-a-kind
reference book, that will surely take its place in the history of this
music.

An
important reference book of all the Prestige recordings during the time
period. Furthermore, Each song chosen is a brilliant representation of
the artist which leaves the listener free to explore further. The
stories behind the making of each track are incredibly informative and
give a glimpse deeper into the artists at work.
--Murali Coryell
Posted by Tad Richards at 6:31 PM