One of the joys of any Red Garland album is always the material—seeing how Red has gone beyond the conventional standards/originals bag to find some worthwhile tunes that others have overlooked, often drawn from the rhythm and blues catalog. Here, with a whole album devoted to the blues, he goes in and out of styles and decades, presenting a portrait of the blues that’s also a self-portrait in blue. 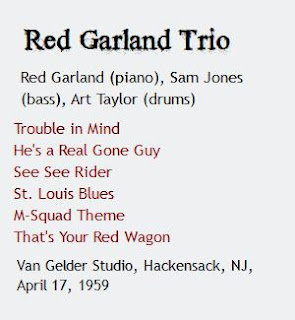 “Trouble in Mind” goes back to the 1920s and the first explosion of recorded blues. It’s credited to songwriter Richard M. Jones. Although it’s been recorded over time by some of our finest jazz singers, including Dinah Washington, Sam Cooke and Aretha Franklin, it has, at heart, that lonely introspection of a man or woman alone with a piano or guitar, singing to him or herself of a deeply personal blues.

Mose Allison caught that feeling on the other Prestige recording of the song, as the trumpet piece for his album Local Color. And Garland catches it here, leaning over the piano, lost in his private blues, the rest of us fortunate enough to get a chance to listen.

“He’s a Real Gone Guy” is from the classic rhythm and blues era of 1940s, and was a hit for Nellie Lutcher. Garland gives it that rhythm and blues vitality, with some powerful solo work by Art Taylor and the new guy in this trio, Sam Jones, temporarily replacing Paul Chambers. Jones was fast 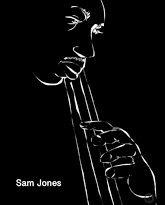 becoming one of the important bass players on the New York scene, though he would be best known for his extensive work with Cannonball Adderley.

“See See Rider” is another one that’s been around since the birth of the blues, at least the birth of recorded blues, in a version by Ma Rainey, and it probably does go back to the birth of the blues. It is a classic traditional 12-bar blues, celebrating one of the most celebrated themes of the blues, the badness of a bad woman. Unlike his approach to “Trouble in Mind,” Garland doesn’t spend a lot of time with the melody, in fact, basically none. He gets right into the improv, a modernist approach to this most classic of blues.

"M-Squad Theme” was written by Count Basie for the hard boiled police procedural that starred Lee Marvin as a Chicago cop. The music mixes a little “Peter Gunn” with a little “Hucklebuck/Now’s the Time” with some Basie swagger to make for a piece which, if it never quite got the ubiquity that Henry Mancini’s “Peter Gunn” achieved, still is a satisfying example of its genre and a good choice for a big, modern blues. As in “Peter Gunn,” the bass gets prominently featured, so it’s a good showcase for Sam Jones.

If you asked the average American to name a blues song, nine times out of ten you’d get “St. Louis Blues.” This W. C. Handy composition, part blues and part tango, has woofed its way into warp of American culture so completely that it is now the name of an NHL hockey team. And “Your Red Wagon” is scarcely a blues at all. It’s Tin Pan Alley, although one of its co-composers is Richard M. Jones of “Trouble in Mind.” Both of them give Garland, Jones and Taylor space for a lot of imaginative trio work.

Red in Bluesville was recorded in April, released in September of 1959, presumably before Weinstock got the idea of a label subsidiary with the same name. Three 45 RPM singles were released from the session: "That's Your Red Wagon" / "Trouble in Mind" and two others that drew one side from this date: "Stompin' at the Savoy" / "He's a Real Gone Guy" and "M-Squad" / "Makin' Whoopee."

Tad
Richards will strike a nerve with all of us who were privileged to have
lived thru the beginnings of bebop, and with those who have since
fallen under the spell of this American phenomenon…a one-of-a-kind
reference book, that will surely take its place in the history of this
music.

An
important reference book of all the Prestige recordings during the time
period. Furthermore, Each song chosen is a brilliant representation of
the artist which leaves the listener free to explore further. The
stories behind the making of each track are incredibly informative and
give a glimpse deeper into the artists at work.
--Murali Coryell