Red Garland was Miles Davis's legacy to Prestige, as Miles sat out one of the tunes on one of his Contractual Marathon sessions and let Garland and his trio audition for a  regular gig with the label. This has to have been one of the most successful auditions of all time, because Garland, as leader of a trio or with the addition of a horn, would record close to thirty albums for Prestige and its subsidiaries, and with good reason. Garland was not only an important piano innovator, he was also consistently entertaining. 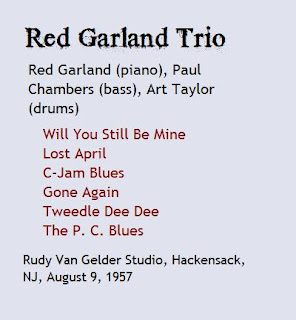 Riccardo Scivales, author of a number of books on jazz piano technique, analyzed Garland's piano technique as follows (and I quote this at some length because it relates to my listening experience as a fan):


Garland...became especially famous and influential for his trademark “block chord” technique, which was very different from earlier “block chord” stylings devised by Milt Buckner, George Shearing and Nat “King” Cole, and was slightly different from [Ahmad] Jamal’s ...Garland’s innovative and distinctive “block chord” style was made of three notes in the right hand and four (rarely three) notes in the left hand, with the left hand playing around middle C and the right hand playing one octave above the left. In this style:


1.the right hand plays the melody in octaves, with a perfect 5th always placed above the lowest note of the octave. As a very important feature of this styling, note that perfect 5ths are played in the middle of right hand octaves even when they seem to not suit the underlying harmony...In fact, these perfect 5ths become virtually inaudible when left hand chords are played simultaneously, and above all they also give these voicings a particularly rich, distinctive and slightly out-of-tune delightful character;

2.the left hand mostly plays four-note (rarely three-note) “rootless chords” in exact rhythmic unison with the right hand. On this matter, it should also been noted that Garland was one of the earliest pianist to make extensive use of “rootless chords”. (Along with Gershwin, Ellington, Tatum and Garner’s pioneering examples of “synchronizing” the melody with left hand chords, “rootless chords” are discussed—with practical applications too—in my method Jazz Piano: The Left Hand, published by Ekay Music/Steinway & Sons.)

As testified by existing recordings, Garland seems to have perfected such voicing towards 1955, when he started using them extensively in his recordings with Davis. Compared to previous “block  chord” stylings, Garland’s had a brighter quality, slightly more dissonance, and more fullness in the upper register.

So how does this work out when you're actually listening to it? Well, playing the Duke Ellington/Barney Bigard classic "C-Jam Blues," Garland joins Paul Chambers in a lead-in vamp in which both piano and bass are functioning as rhythm instruments, and when that right hand, an octave higher as Scivales says, starts playing the melody, the piano is still working as a rhythm instrument.

Ellington's orchestra, of course, while making some of the greatest and most complex music of any era, was always a dance band. Modern jazz is supposed to have lost that danceability factor when the virtuoso soloists became the attraction, and drummers stopped keeping the beat with the bass drum, but Garland's "C-Jam" blues has as good a beat as anything a teenager ever gave a 93 to on American Bandstand, and the only thing that stopped me from getting up and dancing to it was that I was driving in traffic at the time.

Garland's sessions are full of variety. Here we have Ellington. We also have Matt Dennis ("Will You Still Be Mine?"), composer of quirky, wry romances, and Eddie deLange, perhaps not as well known as he should be, given that he gave us "Moonglow"  and "Darn That Dream," among others. "Lost April" comes from a Nat "King" Cole album cut ("Unforgettable" was the hit off the album). It's a beautiful melody, and if it hasn't exactly become a jazz standard after its discovery by Garland, it's had a few solid covers, by George Shearing, Sonny Red and Phil Woods among others.

If you were planning on using this session for a dance evening, "Lost April" makes a romantic, dreamy slow dance. Of course, with the right partner you can slow dance to anything, even a tornado, so you could probably grind along to "Will You Still Be Mine?", even though it's the most boppish of the cuts here.

You certainly ought to be able to dance to Lionel Hampton, and "Gone Again" provides another slow, dreamy sway, as does the bluesy, mood-enhancing Garland original, "The P. C. Blues." And "Tweedle Dee Dee," the Winfield Scott rhythm and blues classic that kids really did dance to on American Bandstand, will get you up and swinging those hips again. The kids on American Bandstand might have been dancing to either the Lavern Baker original or the Georgia Gibbs cover -- it wouldn't have much mattered which, since the Gibbs arrangement matched Baker's note for note and beat for beat. Baker sued but lost -- it was ruled that you can't copyright an arrangement. Garland had unerring taste and judgment in the songs he picked, and if there was a war between jazz and rock 'n' roll in the 50s, Garland may have been its no man's land, with the same generosity of spirit that led troops on either side to stop shooting and toss gifts across the trenches to each other on Christmas Eve, 1914.

Garland's popularity during this era, and his enduring legacy, comes from that unique block chording style, the depth of feeling he gave to his recordings, and his sheer piano wizardry. I got caught up in a dancing mood while writing this, but there is no track in this whole session where Garland doesn't surprise with a sudden run up into the upper register or a captivating blues variation.

And let's not forget his ability to choose material to put together a spellbinding set. And, it turns out, the set is just as spellbinding if Prestige chose to mix and match.

Which they did. "C Jam Blues," "Gone Again" and "Will You Still Be Mine" were released in 1957 on Garland's Groovy album, which also included one track from his May 24 recording date, and two from the previous December, and it's still a great album. The others were held off for a later release as The P. C. Blues. 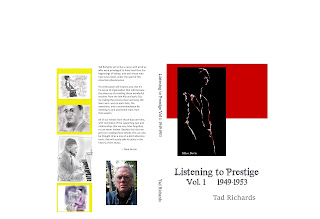