John Jenkins, Clifford Jordan and Bobby Timmons were all young in 1957; they were barely out of short pants when Dizzy Gillespie and Charlie Parker first hit 52nd Street. Jordan and Jenkins, both 26, were newly arrived in New York from Chicago, where they had been classmates at DuSable High, and part of the Windy City jazz scene with Ira Sulivan, Johnny Griffin and others. Timmons, four years younger, had been the first one to arrive in New York, in 1954. He had played gigs with Kenny Dorham and Chet Baker among others, but 1957 was his breakout year. 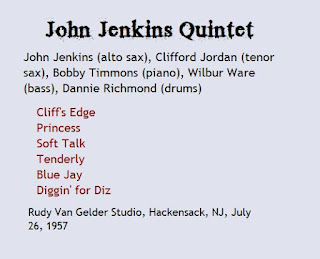 They were heading in very different directions. Timmons would become associated with the soul jazz movement, and write some of its greatest hits, like "Moanin'," "Dis Here" and "Dat Dere." His compositions have become jazz standards, and "Moanin'" is probably still one of the most recognizable tunes in the jazz repertoire. As with "Moody's Mood For Love," its popularity was enhanced when lyrics were set to it (by Jon Hendricks), but the melody was ubiquitous before that.

Timmons was part of Art Blakey's Jazz Messengers when he wrote "Moanin'," and he's probably mostly associated with that group, and its Blue Note recordings, but he would record several albums as a leader for Riverside, and then return to Prestige for several more in the mid-sixties. He would die young, at 34, another victim of heroin.

Jenkins would record only two more albums as a leader, both in 1957, but soon after circumstances in life forced him to the streets, where he would hustle a living as a pedlar and street musician for the next three decades. 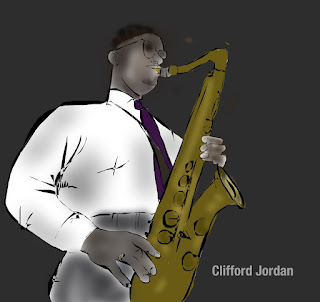 Jordan would have a long and distinguished career, known as a musician's musician, not really associated with any one school, playing with funksters (Horace Silver), experimentalists (Eric Dolphy), funky experimentalists (Charles Mingus), touring Africa with Randy Weston. Jordan's style was strongly influenced by Lester Young, at a time when Young's influence was diminishing, but he drew from a multitude of sources, including Nobel Laureate Herman Hesse's novel The Glass Bead Game, and the songs of folk blues artist Lead Belly.

The decades after the Prestige era. the 70s and 80s, saw a different breed of independent label, and Jordan recorded for several of them. Muse was the creation of Prestige alumni Joe Fields and Don Schlitten. Many of the later small indies were formed by musicians. One such was Strata-East (Charles Tolliver and Stanley Cowell), which released a number of Jordan titles. Others like SteepleChase and Soul Note came from the European love for American jazz. Jordan would ultimately make over 40 recordings, and in 1990. he would bring John Jenkins off the streets for a final recording. 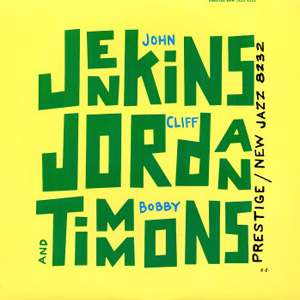 Jenkins and Jordan would go out together, dying within a couple of months of each other in 1993, DuSable High School. Their shared background shows in the intuitive closeness they bring to this session, abetted by another DuSable graduate, Wilbur Ware. Dannie Richmond, who had just begun his long association with Charles Mingus, is on drums.
just as they had come in together from Chicago in 1957. Chicago is best known today as the cauldron of the postwar electric blues sound (and both these young horn players played in rhythm and blues bands in their home town), but it has a powerful jazz history too, beginning with the New Orleans diaspora of King Oliver and Louis Armstrong, and their young white acolytes from a local high school. Bix Beiderbecke and Frankie Trumbauer. Later it was to become a hotbed of the avant-garde, with the Association for the Advancement of Creative Musicians and the Art Ensemble of Chicago. But in between, as the bebop revolution inspired musicians throughout the country, it had a music scene to be reckoned with, with many of the young cats (including Jordan) getting their start at

The album was released on New Jazz as Jenkins, Jordan, Timmons.