There's no one who didn't, and doesn't love Billie Holiday, but few with the devotion of Webster Young. In fact, Billie Holiday may have saved his life. Don Alberts, in his book Diary of the underdogs: Jazz in the 1960s in San Francisco, described this episode:


Young trumpeter Webster Young loved Billie Holiday. He knew all her tunes and he could sing the lyrics. Once in Los Gatos at Lorraine Miller's house, Webster was invited into the peyote experience. He was curious and he accepted. The hallucinogenic qualities of peyote cactus are legendary and the comfort mode can go either way. With Webster it may have been disquieting and he became immediately silent, he said nothing to anyone. He listened to Billie's records over and over all that night without moving from a cocoon position in front of the stereo. Billie's voice seemed to gve him peace, help him hold onto reality. 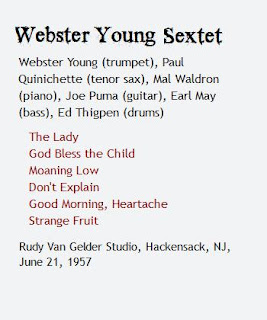 This is an unusual glimpse into the life and psyche of Webster Young. It's surprising that he was out in San Francisco in the 60s, even more surprising that he took this walk on the wild side. One thinks of Young leaving the dangers of Manhattan jazz life behind him, going back to Washington. DC, and beginning his second career as an educator, which would occupy the rest of his life.

But maybe there was a detour. There's Alberts' story, which takes him out to San Francisco, and there's a 1961 three-volume live recording of a tribute to Miles Davis, about which not much is known, but it was made with St. Louis-based based musicians, so that may have been another stop for him.

Davis was his chief influence on the trumpet, but not his only one. As a boy, he corralled Louis Armstrong backstage at the Howard Theater in Washington and convinced the trumpet legend to give him an impromptu lesson. Hearing Dizzy Gillespie for the first time drew him toward bebop. But Miles was the one who took him under his wing in New York, and on For Lady he plays a cornet loaned to him by Miles. 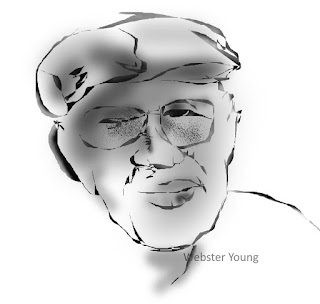 
What's particularly interesting about this album is you get to hear what Miles Davis and Lester Young would have sounded like had they recorded together in the studio in the '50s. Webster Young's blowing here is often with a mute, and his pacing is distinctly in the manner of Davis. Joining

him on tenor sax was Paul Quinichette, whose playing was a traced sketch of Lester Young's laid back and languid blues-saturated style.

You don't necessarily associate the guitar with Lady, but Joe Puma fills out the sextet, and does some excellent work, particularly on "Good Morning Heartache." Mal Waldron, who had just started working with Holiday and would be her accompanist for the rest of her career, surrenders his composing duties to the songsmiths associated with her, including herself (with Arthur Herzog) for "God Bless the Child" and "Don't Explain." Ed Thigpen was a frequent occupant of the drum seat on Prestige recordings of this era. He was also working with Billy Taylor, and brought Taylor's bassist Earl May along for this session.

For Lady was Young's only studio session as a leader.
Posted by Tad Richards at 3:16 PM