Gene Ammons played back to back sessions in October of 1961, with different lineups, for two different albums, although some tunes from each session would end up on each album.
Art Taylor and Ray Barretto supplied the percussion for both sessions, both of them familiar sounds to Prestige listeners, particularly Taylor, who had appeared on 65 earlier Prestige sessions. George Duvivier, who played on the October 18 session, was another regular, with 33 previous appearances.
Art Davis was the other bass player. He had first been heard on a Prestige recording just the week earlier, 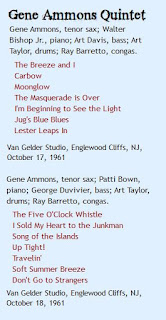 appearing on Oliver Nelson's epic Afro-American Sketches. Ammons and  producer Esmond Edwards blended youth and experience on both dates, with Davis (age 24) paired with Walter Bishop Jr. (age 34) on piano, while the veteran Duvivier (age 41) was matched with Patti Bown (30).
Both Davis and Bown had classical as well as jazz backgrounds. Bown moved early into jazz and stayed there, but Davis, regarded by many as one of the finest musicians of his generation, continued to work, and excel, in both worlds.
And he paid for it. Although he played with major symphony orchestras, those positions were hard to come by for an African American, and in 1969 he filed a discrimination lawsuit against the New York Philharmonic, which up until that time, had employed exactly one Black musician. He lost the lawsuit, but his activism led to the practice of blind auditions, where the judges could not see the race or gender of the applicant who was playing. But activism often comes with a price, and for Davis the price was a blacklist. He found it hard to get employment as a musician in the 1970s, and this was a man who was known to be John Coltrane's favorite bassist, who had been described as a "forgotten genius" by Ahmad Jamal and "beyond category" by critic Nat Hentoff.
Davis, for a while, had to find another line of work, and he did. I've talked about jazz musicians who found other things to do--George Wallingford going into the family air conditioning business, Wendell Marshall starting his own insurance agency--but Davis did them one better. He went back to school and got a doctorate in clinical psychology, and as gigs started coming his way again--both jazz and classical--he worked them around seeing patients.
Ammons, always a versatile player, covers a wide range of material in these two sessions. 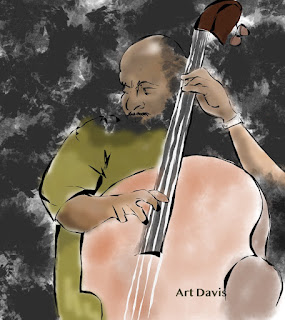 There are three jazz standards, which allow Ammons and Co. to exercise their bebop chops. "The Masquerade is Over," composed by Allie Wrubel, was a hit for Jimmy Dorsey and others in 1939, then lay mostly dormant until until a doowop group, the Cleftones, picked it up in 1965, and the following year Cannonball Adderley became the first modern jazz musician to record it, after which it rapidly became a favorite of jazz, pop, and even rhythm and blues performers,  "I'm Beginning to See the Light" is from the Ellington songbook, co-composed by Duke, Johnny Hodges and Harry James, it has the subtle chord changes that beboppers love. Scores of jazz singers, and singers who'd like a little jazz tinge to their repertoire, have recorded it, and it's been a favorite of instrumentalists as well. In 1961 alone, it was recorded by Ben Webster, Billy Byers, Ruby Braff, and Al Casey. And Lester Young's "Lester Leaps In" has remained a great vehicle for tenor sax players ever since Young and Count Basie introduced it in 1939, although it took a while to become the ubiquitous standard that it is. The first jazz musician to record it after Lester was James Moody in 1949 (for Prestige, on the same Swedish session that produced "Moody's Mood for Love").  Oscar Peterson recorded it in 1956, then Cannonball Adderley with Gil Evans in 1958, and after that, the floodgates opened.
"Travelin'" by Kenny Burrell isn't so much of a standard, but it's a nice tune, and this may be the first recorded version of it. Burrell doesn't seem to have recorded it until two years later, a session with Jimmy Smith.
The recent pop song catalog was mined for "The Breeze and I," "Song of the Islands," "Soft Summer Breeze," "Moonglow" and "The Five O'Clock Whistle."  All of these except "Soft Summer Breeze" were older songs that had been resurrected during the 1950s.
One aspect of 1950s culture that's not often remembered was the rise of what would later come to be called "easy listening" music, but was in that era a rearguard action against rock and roll. The playing of recorded music had become one of the predominant features of the radio airwaves by the 1950s, as live broadcasts from the big bands disappeared, and comedy and drama shows, and their stars, were lost to television. The first record was played over the air in 1911, when both radio and records were in their infancy. But the format was not to catch on right away, because a lot of restrictions were put on the way recorded music could be presented, and a lot of records simply couldn't be played over the air, because many artists wouldn't allow it, and their records were stamped "Not licensed for radio broadcast."
A real milestone in the history of recorded music on radio came 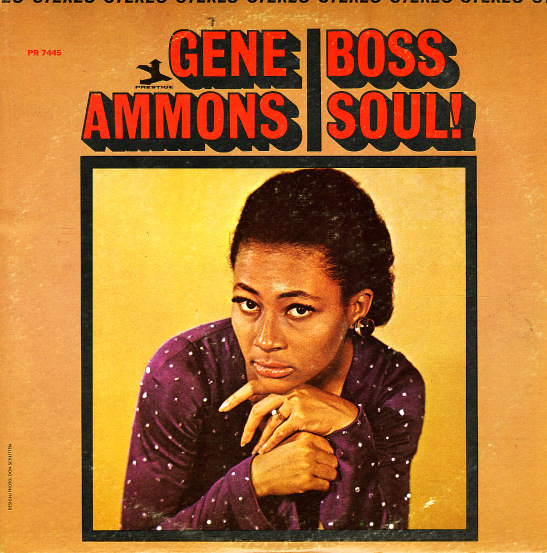