Jimmy Forrest is back in Englewood Cliffs again after only six weeks, with mostly the same group--minus the guitar, plus Ray Barretto on congas, and with a similar mix of good tunes, not necessarily the tunes you'd hear on every modern jazz musician's set list.
The tenor saxophone is and is not a modernist instrument. It's not associated with the traditional jazz era, and not really so much with the swing era, when the clarinets of Benny Goodman and Artie Shaw reigned supreme. Yet so many of the titans of the tenor - Coleman Hawkins, Lester Young, Ben Webster, Stan Getz, Sonny Rollins -- are virtually unclassifiable. Not swing, though they can swing. Not bop, though they can bop. Not cool, though they can play it cool. 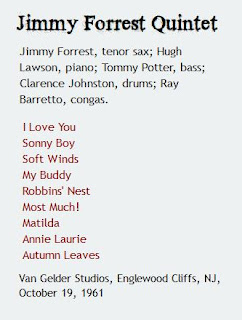 And the same is true of the not-quite-titans, the demi-gods like Gene Ammons and Illinois Jacquet and, yes, Jimmy Forrest. The tenor sax has that human voice-like quality, and the voice is the most flexible instrument of them all. And all these cats can play the blues.
Forrest is back, as in his September session, with some familiar tunes, just not necessarily familiar in this context. And as with the tunes in the September session, he makes them work. Forrest has a great warmth to his tone, particularly in the lower registers.
Of particular enjoyment to me in this session is "Matilda," the 1930s calypso tune brought up to date in the 1950s by Harry Belafonte. Sonny Rollins also brought calypso into modern jazz at around the same time, possibly a little later. Ray Barretto drums up a storm.

Esmond Edwards produced, and the session was released on Prestige as Most Much!, except for tunes, "I Love You" and "Sonny Boy," both of which were added to a New Jazz release, Soul Street, which gathered bits and pieces from other sessions. The traditional Scottish melody "Annie Laurie," which had been part of a brief swing era vogue for Scottish folk songs, became a two-sided 45.
Posted by Tad Richards at 2:07 PM