Willis Jackson came to Prestige in 1959 with his longtime bandmates Jack McDuff and Bill Jennings. They had been playing the genre of jazz often dismissed as rhythm and blues, but with the cachet of the Prestige label, their music was now called mainstream jazz, and soon, soul jazz.  By 1961, McDuff had gone out on his own, and was on his way to becoming one of the biggest stars on the Prestige label, forming a one-two organ punch with Shirley Scott. Bill Jennings would continue to play off and on with Jackson, creating a guitar sound that would deeply influence a future generation of guitarists, but would never win him stardom in his own career. 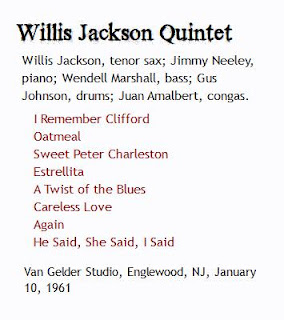 This was Jackson's first session with neither of his old cohorts, but he's still the same Gator, playing pretty for the people, and absorbing some lessons from his rhythm and blues years, when you played tunes that could fit on a 78, later 45, RPM record, and would get play on jukeboxes. The tunes could be long enough to fit on both sides of 45, like Bill Doggett's "Honky Tonk" or Cozy Cole's "Topsy," but mostly they weighed in at under three and a half minutes. He does have a couple of six-minute songs here (by the album standards of the day, still short), but most of the cuts come in around four minutes. The other lesson was pay attention to tunes and hooks. Give people something to respond to quickly.

These aren't the only criteria for making good music. In the age of Ornette Coleman, they might even have seemed a little quaint. But Jackson used them wisely and skillfully, and if he didn't make Down Beat's polls, nor is he remembered widely by today's jazz aficionados (did not make ranker.com's list of 200 greatest saxophonists of all time; by contrast, Jack McDuff  is #16 on their organist list), he nevertheless made music that is beautiful, soulful, earthy, danceable, and well worth your nickel in the jukebox.

This session featured Jimmy Neeley on piano. Neeley, whose name was also spelled Neely from time to time, had visited Englewood Cliffs before at Prestige's behest: the previous December, he had led a

trio in a session that was released on Prestige's short-lived budget label Tru-Sound. And he might have had a longer history with the label; he worked with blues singer H-Bomb Ferguson, who recorded for Prestige in the early days, but as with a lot of vocalist recordings, the session musicians weren't noted. He played with rhythm and blues/jazz artists Mickey Baker and Red Prysock, and wit Roy Eldridge.

Gus Johnson had recorded for Prestige with Coleman Hawkins, Lem Winchester, Taft Jordan and Willie Dixon. Wendell Marshall was one of their most often-used bassists of the era, and Juan Amalbert was the leader of the Latin Jazz Quintet.

Benny Golson's "I Remember Clifford" had already become a standard since its first appearance on record, performed by Donald Byrd and Gigi Gryce. Jackson treats it with the love you'd appropriately give to a classic. He does the same with "Careless Love," here credited to W. C. Handy, although it's an old folk blues which predates Handy. He has a few of his own tunes, a couple from other sources. "Again," by Lionel Newman, was introduced by Ida Lupino in the film noir cult favorite, Road House. "Girl of My Dreams" was the only hit for Charles "Sunny" Clapp, who led a territorial band, mostly in Texas, in the 1930s. And I think my favorite tunes on the album are the two composed by Johnny Griffin: "Oatmeal" and "Sweet Peter Charleston," featuring some hot blowing by the Gator, and some tasty work by Amalbert and Neeley.

The album was Really Groovin', which also featured one track from a different session and with a different band. "Careless Love" and the Jackson composition "He Said, She Said, I Said" (two more favorites) were the 45 pm single. One tune from session, "Estrellita," was held back for a later Moodsville album, In My Solitude. Esmond Edwards produced.

Volume 4 is in preparation now!