This is one of the most storied pairings in jazz lore, like Charlie Parker and Dizzy Gillespie, or Clifford Brown and Max Roach, and like them, it was destined to end much too soon. Bird, of course, was destroyed by drugs. Clifford Brown died in an auto accident. And both Eric Dolphy and Booker Little succumbed to illness--Little at the age of 23, less than a year after making this recording. 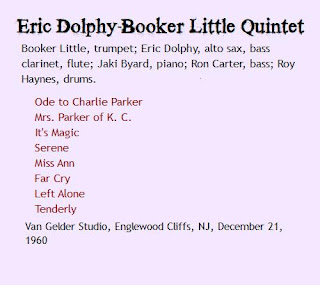 During a period in which Prestige was turning a lot of its attention to the tradition, with its Swingville and Bluesville sessions, Eric Dolphy was their standard bearer for what one of Ornette Coleman's album titles had described as the shape of jazz to come. Dolphy had last been in the studio as a leader on August 31, and that album had been titled Out There. The labelsthat were taking a chance on the new jazz were not at all shy about marketing its newness. Other Atlantic titles for Coleman were Tomorrow is the Question and Change of the Century. Albert Ayler's debut was Something Different!!!!!! (yes, with all the exclamation points). Cecil Taylor, who may have been the first important jazz figure to enter the avant garde, or this particular avant garde, put out albums called Jazz Advance and Looking Ahead! John Coltrane's step into the next incarnation of jazz was a little more modestly--but absolutely accurately--called Giant Steps.

This session by Dolphy would be titled--an evocative touch, rather than a manifesto--Far Cry, but it still carries the message. This was staking out new ground, and if Little hadn't yet gone quite as far into uncharted waters, Dolphy saw something there, and Little responded. The quintet they formed together played one memorable two-week gig (also recorded by Prestige) at the Five Spot in June of 1961, but by October Little was gone, a victim of complications from uremia. 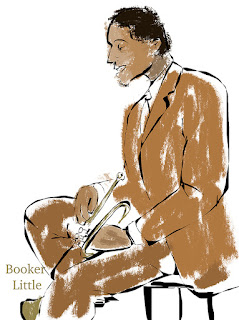 It had already been a busy day for Dolphy by the time he got to Englewood Cliffs. Earlier in the day, he had participated in a groundbreaking Ornette Coleman session for Atlantic. The Atlantic album would be called Free Jazz, and it featured a double quartet--that is, two separate quartets, each playing over a separate stereo channel: on the left, Coleman and Don Cherry, with Scott LoFaro and Billy Higgins on bass and drums; on the right, Dolphy and Freddie Hubbard, with Charlie Haden and Ed Blackwell. This one, like so much of the new jazz, was an opinion divider: Downbeat assigned it to two reviewers, of whom gave it five stars and the other, no stars.

Dolphy was well into the world of jazz by this album; it was a newer experience for Booker Little, but Dolphy hadn't picked him capriciously: he heard something.

The session begins with two Parker tributes: one to Charlie, one to his mother, both composed by Jaki Byard, who had also been with Dolphy on his debut album for Prestige from the previous April. "Ode to Charlie Parker" has a dirgelike quality at the head, but the soloists break free from that, each in his own way. Dolphy, playing flute, is certainly the freest. Little's solo comes next, and it gives the jazz listener who's grown up with bebop more reference points to hold onto, but it's still in keeping with Dolphy. Byard takes the third solo, and I love what he's doing too. One might say he keeps the melody a little more in mind, but then, it's his melody. When they come back to the head, it still starts with the dirge-like statement, but then, still playing it, they rise above it to a kind of exaltation, almost like the brass bands returning from a New Orleans jazz funeral. How's that for a cross-cultural reference? But that is what it feels like.

For whatever reason, Parker's mother gets the more uptempo, boppish tune. Dolphy plays bass clarinet on this one, but we don't get to him right away. The first solo goes to Little, and it'll make your head spin, for both its passion and its virtuosity. Byard keeps it up, and then Dolphy comes in and blows the roof off. This is a sound that can take you back to 1960, to the realization that the jazz torch is being passed to a new generation, and you're here to bear witness to it, and marvel at it, and if you listen closely, to tell yourself yes, this is the way it has to go.

Ron Carter dazzles with a bowed bass solo, and the number finishes with some ensemble playing that makes you rethink everything you ever thought you knew about playing together.

From there, they go into "It's Magic," a syrupy romantic ballad that was a favorite of crooners, not so much of jazz instrumentalists. In fact, this was probably the first jazz treatment of it, and there have precious few since. Little starts out with a surprisingly straight version of the melody, and then--well, you could say it's the standard bebop small group structure: head, solo, solo, solo, head. And why not? Not everyone agreed with John Lewis that jazz had to break free from that template. Musicians like Dolphy, Byard and Little were here to prove you could break free within that template. As they come back to an almost, but not quite, straightforward statement of the melody, still somewhat syrupy but not the way Little plays it, you know you've been taken a far cry from Doris Day and her Latin lover who introduced the song in a forgotten 1948 movie.

"It's Magic" featured Dolphy again on bass clarinet, and so does "Serene," a Dolphy composition that didn't make it onto the LP but was added to the CD reissue. "Serene" is the kind of title that jazz musicians often give to workouts that are anything but. However, in this case, there is a certain serenity to the tone, at least as serene as a group of avant garde musicians who are pushing limits can get. Little seems to keep taking more chances with each cut, and in this one especially, Dolphy keeps prodding him onward. Dolphy as a bandleader was famous for not giving a lot of verbal instruction to his bandmates, but it's pretty clear from this session that he didn't need to.

"Miss Ann" is a Dolphy composition which hasn't quite become a standard but has gotten its share of adherents and has been recorded several times over the years. "Far Cry" is the final Dolphy original. He plays alto sax on both of them, matching the instrumentation of the original Ornette Coleman combo with Don Cherry, but Dolphy and Little are finding their own paths to freedom, abetted by Jaki Byard (Coleman had a pianoless quartet), who is finding his own way, too.

"Left Alone" is Mal Waldron's tribute to Billie Holiday. "Tenderly" is the standard by Walter Gross, with Dolphy alone on alto sax, everyone else dropping out. It's lyrical and disturbing, respectful of the melody and willing to leave it behind at a moment's notice, It's lovely.

Far Cry became the name of the album, which was issued on New Jazz.. Esmond Edwards produced.