I am sadly unable to find anything on the next Prestige session, a septet led by Rex Stewart and featuring kazoos, among other instruments for an album called Happy Jazz. So instead of a visit back to the happy land of trad jazz, we move into the not necessarily happy, but certainly adventurous future with the modernism of another musician who, like Gigi Gryce played the alto sax (also tenor) and who, also like Gryce, became better known as a composer. 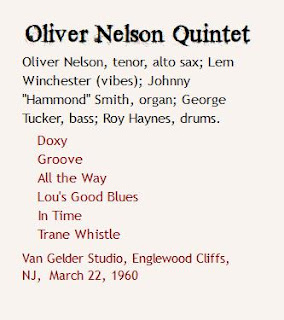 This would be the second in a string of albums that Nelson would make for Prestige, and taken together, they make a strong case for not being taken together. Nelson uses different combinations of musicians on each, different sets of powerful individual voices. And if you could say that taken together, they show Nelson's remarkable range as a composer and arranger, you could actually say that about the compositions that make up each separate album. Certainly Taking Care of Business is adventurous enough, and certainly it's an Oliver Nelson album. He uses the skills of gifted improvisers, but the way their solos are stacked against each other adds up to an adventurous, unexpected and satisfying whole.

On his first Prestige outing, he used the archetypal bebop saxophone-trumpet quintet, but with the 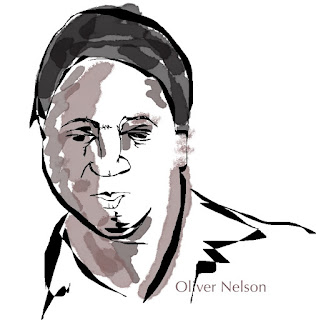 unique voice of Kenny Dorham on trumpet. This time he ventures farther afield. Saxophone and Hammond organ have become a recognizable turn-of-the-decade sound thanks to Eddie Davis and Shirley Scott, but what Nelson and Johnny "Hammond" Smith do with them takes that sound in a whole new direction -- and then, he adds the vibraphone of Lem Winchester to make it a truly unique front line. Winchester had made his Prestige debut a few months earlier with Benny Golson.

At nearly ten minutes, "Trane Whistle" shows all of this: the bold composition, the juxtaposed solos, some bacchanalian duet work, dynamic range, and an overall feeling that manages to be both tight and discursive.

The two non-Nelson originals are Sonny Rollins' "Doxy" and the Cahn-Van Heusen standard "All the Way." Esmond Edwards produced, and Taking Care of Business came out on New Jazz. "Trane Whistle" became a two-sided 45, also on New Jazz. I'm not sure it was your typical 45 RPM fare, but it must have turned a few heads when it was slipped on the record changer.