I wrote this about blues singer Al Smith's debut album for Prestige Bluesville:


Al Smith is a remarkable singer. How remarkable? Well, take his cover of a Ray Charles tune.

Ray Charles was a wonderful songwriter, and his songs have been widely covered: "I Got a Woman," "This Little Girl of Mine," "What'd I Say?" But nobody else that I've been able to find has covered "Night Time is the Right Time," and with good reason: the distinctive raw, pleading response vocals of Margie Hendrix make it virtually uncoverable.

But Smith makes it work. His gospel-tinged blues singing is sufficiently different from Charles's to make his approach unique--and while it's equally different, it has enough of Hendrix's fervor to power his singing of both parts. 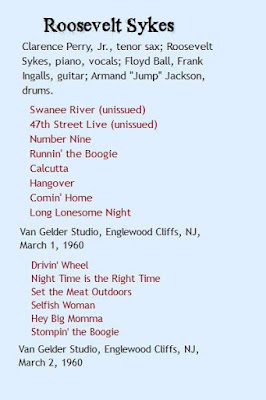 Sykes' version, with his boogie-woogie piano, and his classic blues shouter style, was of course dramatically rethought and retooled by the time it got to Ray, but it turns out there was yet another intermediate version. Sykes' song was revamped to the point that it was considered a new song, and copyright and writing credits were given to Herman Lubinsky, the head of Savoy Records (writing as Lew Herman), Nappy Brown, and Ozzie Cadena, then a producer for Savoy, later for Prestige. Nappy Brown recorded it on Savoy, and his version is terrific, and rhythmically similar to Ray's, but Ray and the Raeletts and Ray's great orchestra still own the song.

Sykes' version is terrific too, in its own very different way, both as originally recorded in the 1930s and as recorded here in this 1960 session for Bluesville.

Bluesville in a way was the most interesting of Bob Weinstock's three subsidiary labels, because it was the most amorphous. He knew exactly what he wanted for Swingville--the older musicians who still had a lot to say, the Basie alums and Coleman Hawkins and the rhythm and blues/swing guys like Buddy Tate. And Moodville--it was like Chris Albertson said, these weren't Jackie Gleason records, they were real Prestige jazz by some of the label's finest artists, playing mostly standards and setting a mood. 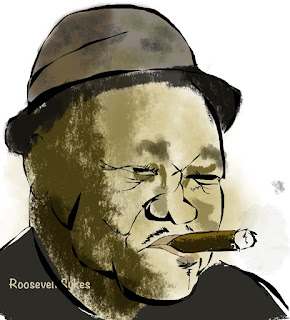 But Bluesville was more of an experiment. He'd showcased little-known but deserving blues singers like Al Smith and Mildred Anderson. He'd presented blues veterans like Memphis Slim and Willie Dixon. Understandably, he leaned more toward a jazz-shaded blues format, and this was a good thing. It gave the Prestige blues releases a quality of their own. Smith and Anderson were backed by Eddie "Lockjaw" Davis and Shirley Scott. Dixon, one of the chief architects of the Chicago blues sound, had been the bass player for a lounge jazz trio modeled after the Nat "King" Cole Trio and Johnny Moore's Three Blazers.

Sykes was a veteran bluesman, whose recording career went back to the 1920s (he had first cut "Night Time is the Right Time" in the 1930s). A lot of his recording was piano blues and boogie-woogie in the tradition of Albert Ammons or Pete Johnson, with some of the jazz inflection of Leroy Carr. But he'd had success in the 1940s with a recording of Joe Liggins' "The Honeydripper," and adopted that title as his stage nickname. In 1944, he put together a band, and made some recordings as Roosevelt Sykes and the Honeydrippers. By the turn of the decade, his career had pretty much played out, and he had slipped into obscurity. Weinstock wanted to develop that "Honeydrippers" aspect of his musical personality, and he put him with a five-piece combo. The musicians who worked with him on this two-day Prestige session are pretty much forgotten today, with the exception of Armand "Jump" Jackson, one of the best-known drummers on the Chicago blues scene of the 1940s, so probably these were all guys who had worked with Sykes in Chicago. But they can play, and Clarence Perry, Jr., has an arresting tone on the tenor sax.

Sykes sticks to the 12-bar blues format for the most part, with vocals that are powerful and sensitive, but each song allows plenty of room for instrumental improvisation. "Runnin' the Boogie" is a good example. It was a staple of Sykes' repertoire, and YouTube has an excellent video of him performing it as a solo piano number at a 1970 blues festival. But this recording has the piano giving way to some hot guitar licks, followed by an instrumental frenzy that features Perry worrying the blues riffs like a bulldog shaking a rat.

Sykes and company spent two days in the studio. The resulting album is called The Return of Roosevelt Sykes, and it was indeed a return. It was also a debut of sorts--the first time he had recorded a group of songs for an LP record. No 45 RPM singles were released from either session, which is interesting. Weinstock must have felt that there was no singles market for traditional blues, and he was probably right. Even with the modern sound of the group backing him, Sykes was essentially a traditional blues shouter, and the market was essentially that which had been cultivated by Moe Asch at Folkways.

VERY CLOSE TO BEING READY TO TAKE ORDERS FOR LISTENING TO PRESTIGE VOL 3!

A few errors here: St. Louis Jimmy Oden wrote "Night Time is the Right Time;" he gave it to Walter Sykes, who didn't record it, and his brother Roosevelt asked to record the song. It was first recorded for Decca on 21 February 1936.