Listening to Prestige makes a great Christmas gift for the jazz fan on your list!

Ray Bryant didn't have an extensive career with Prestige. He had been on a Miles Davis session in 1955, when Miles was starting to think about putting together a regular quintet for his jumpto Columbia. Bryant didn't make the cut, and he wouldn't really have been the right fit, but Miles did use one of his compositions on the date, and gave Bryant some advice (from an interview in JazzTimes): "He told me to play my chords a little shorter-not to let them ring so much.” This would, however, not be advice that would have a lasting impact on Bryant, as he loved those churchy sonorities of his youth. 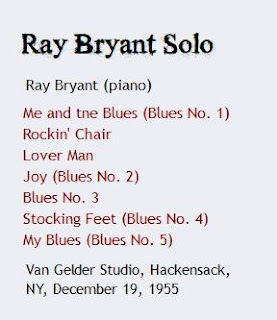 Also in 1955, Sonny Rollins tabbed him for a Prestige date (he recalls the breakneck pace on "There's No Business Like Show Business").mIn 1957, he did an Art Taylor-led session with Donald Byrd and Jackie McLean, and had one of his earliest sessions as a leader (not quite his first--he had recorded with a trio for Epic two days earlier). During 1958 he he had a run of several Prestige sessions, culminating in this, his first solo album, although certainly not the last. After that, three sideman sessions in 1959, and then he took his career elsewhere, to huge success, including a couple of hit records. But Alone with the Blues remains one of his signature achievements.

Most of the record is original compositions, or a variety of variations on some basic blues themes (though the compositions have titles of their own, they're also known as Blues #1, 2, 3, 4 and 5). And Bryant was the right man for the job. He had grown up playing piano in church, but had been seduced by the devil when he went to a piano recital that featured both Teddy Wilson and Art Tatum. He went on to love and master an unusually wide range of styles, from traditional to modern, and you can hear all of it in this session.

There's a great tradition of the solo piano in jazz, from Scott Joplin and Jelly Roll Morton through Art Tatum through Erroll Garner, Thelonious Monk, Bill Evans, Keith Jarrett and Brad Mehldau, and Ray Bryant's solo work can stand shoulder to shoulder with all of them, as he would become one of the premier solo pianists of his generation.

Esmond Edwards produced the session. Alone With the Blues was originally a New Jazz release, and would later be re-released on Prestige. "Joy" and "Stocking Feet" came out on 45, but Bryant's huge success in the pop singles field would come later, with "Little Susie" and "Madison Time."

An important reference book of all the Prestige recordings during the time period. Furthermore, Each song chosen is a brilliant representation of the artist which leaves the listener free to explore further. The stories behind the making of each track are incredibly informative and give a glimpse deeper into the artists at work.
--Murali Coryell
Posted by Tad Richards at 8:58 AM