It's hard to say how many compositions came from the imagination of Mal Waldron, but they certainly numbered in the hundreds. Any session that hired Waldron as pianist was more than likely to want one or more original compositions from him, and he wrote most of the material on the albums he recorded as leader. If you're that prolific, one of two things is likely to happen. You're going to start repeating yourself -- not necessarily bad thing, if you're finding new ways to do things you've done before. Or you're going to keep finding new ground. 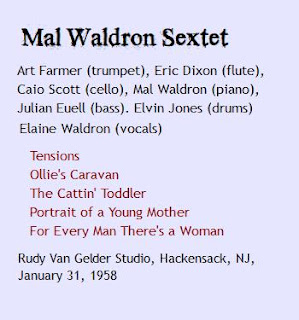 Waldron wasn't one to stay still. He had a wide range of passions and influences. He was still part of that generation, slipping away as the 50s played themselves out, that got its start in rhythm and blues. He was a lover of classical music, and recorded several pieces by classical and modernist composers. He worked with beboppers and the avant garde, and he was Billie Holiday's accompanist during the last two years of her life. And he brought all of that experience, and his own restless genius, to bear on his work as a composer.

When one starts to categorize music, one immediately runs into the futility of categorizing music. A jazz recording session in 1957-58: is it bop? Hard bop? Cool? Neo-swing? Third stream? The lion lies down with lamb, Mulligan meets Monk, and Dizzy Gillespie plays a duet with Louis Armstrong. And that's just jazz. What do we call that other music that was composed earlier in the 20th century by Charles Ives and Aaron Copland, later on by John Cage and Philip Glass and LaMonte Young? Contemporary classical music? That's not only moronic, it's oxymoronic. What else? Composed music? Duke Ellington composed his music, and so did film scorers from Korngold to Elmer Bernstein, not to mention Leonard Bernstein. Cage and Glass were avant garde, but so was Ives in his day, and nobody stays avant garde. So we're probably stuck with contemporary classical music.

And how is that different from what Mal Waldron is doing in this early 1958 session? It must be jazz, 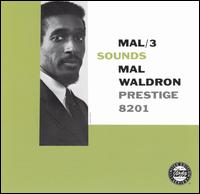 because it's got that swing without which, the Duke tells us, it don't mean a thing? Elvin Jones, on drums, had that swing, and Waldron was already teamed up with Billie Holiday, who out of the era for which Swing was the name, not just a characteristic. But listen to the beginning of "Tension." The number will move into jazz improvisation, with great solos by Art Farmer and Eric Dixon, but the opening section -- I'm not even sure you'd call it a head -- has a lot of the tonality and feeling that we associate with what we call classical, oxy and moronic though we may be, and not just in what Waldron and Farmer and Dixon are doing -- Jones is very much a part of that stance.

"Ollie's Caravan" has a head that's very much in the bop tradition--and an arresting melody--but then it goes different places. Putting a caravan in the title can't help but make one think of Duke Ellington and Juan Tizol, but while Eric Dixon's flute solos have an Eastern tinge, they make one think of Yusef Lateef's experiments more than "Caravan." And all the above ingredients come together again in "The Cattin' Toddler" -- a striking drum intro by Jones, a catchy riff head, Eastern-tinged flute by Dixon, plus a wonderful extended solo by Farmer and the kind of work one expects of Waldron in improvising off one of his own compositions--which is to say, something completely unexpected.

"Portrait of a Young Mother" provides a space for a wordless vocal by Waldron's wife Elaine, although the piece is by no means a song, or even primarily a vehicle for voice. At ten minutes long, it gives room for solos by everyone, including a wonderful pizzicato cello by Caio Scott. This and "The Cattin' Toddler" suggest a devotion to family life that Waldron, sadly, was not able to entirely sustain. In 1963, a heroin overdose led to a major breakdown that finally responded to shock treatments and a spinal tap. His marriage to Elaine did not last. But perhaps there was a happy ending after all, for which I am very glad. These folks give so much to us, it's good to know when they get some happiness back. Mal and Elaine had two children. He had five more with his second wife, and in 1995, to celebrate his 70th birthday, he took both wives, all seven children, and two grandchildren with him on a three week tour of Japan.

These were released on New Jazz as Mal/3 -- Sounds.

Listening to Prestige Vol. 2, 1954-1956 is very close to release. Order your advance copy from tad@tadrichards.com 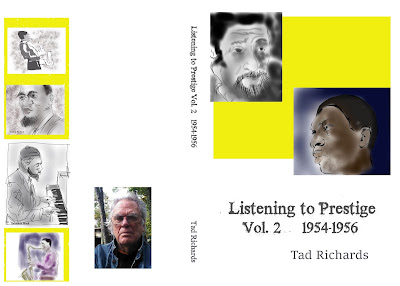